Kickstarter: Miggo Pictar Is a Grip Attachment That Makes the iPhone Feel More Like a Camera 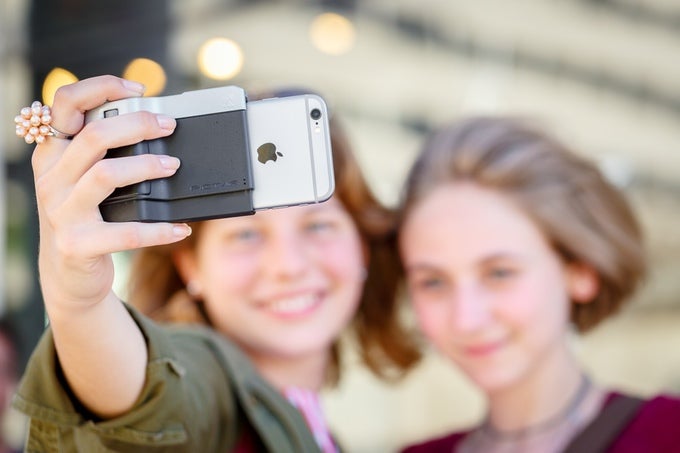 Somehow, the idea that the iPhone is a good camera is still polarizing, with some purists adhering to the idea that it’s not a “real camera.” While I think that claim is a lot of nonsense, I will readily admit that the physical experience of shooting with the iPhone isn’t ideal. Miggo’s new Pictar accessory, however, acts as an add-on grip that makes the iPhone feel and operate more like a dedicated camera.

The Pictar actually has quite a few features, including a dedicated shutter release button, an exposure compensation wheel, a “smart wheel” for adjusting other settings, a cold shoe mount for attaching LED lights or other accessories, and a zoom dial that doubles as a selfie button.

Perhaps the most functionally promising part, however, is the simple grip that allows the iPhone to be handled like a typical camera. The press material keeps making reference to making your phone more like a “DSLR,” but that seems like an effort on their part to simply imply quality. In reality, it makes the iPhone more like an advanced compact camera, or even a small mirrorless camera.

The camera works through a dedicated phone app with a rather clever underlying mechanism. Rather than a hard connection to the iPhone or a standard Bluetooth connection, the app uses a “dual tone” system, which actually associates specific sonic tones (that are inaudible to the human ear) with each function. The tones then inform the app which functions to perform. I’m curious to see what the latency is like using this system, but it sounds interesting to say the least.

The grip uses two standard CR 1/2 AA batteries and can go between four and six months before needing replacement.

Originally, the grip was going to work with all current iPhones with the exception of the iPhone 6s Plus because if its massive size, but due to popular demand, a 6s Plus option has been added to the Kickstarter.

The early bird price for the Pictar is $70, going up to $75 for the second wave, and then landing at $90 for the regular price. It looks interesting and it does actually add a fair bit of functionality to the iPhone itself, but its ultimate success will be determined by a few factors including its speed, reliability, and the overall quality of the app.

We will be interested to give it a try and we’ll share some impressions when we’re able.