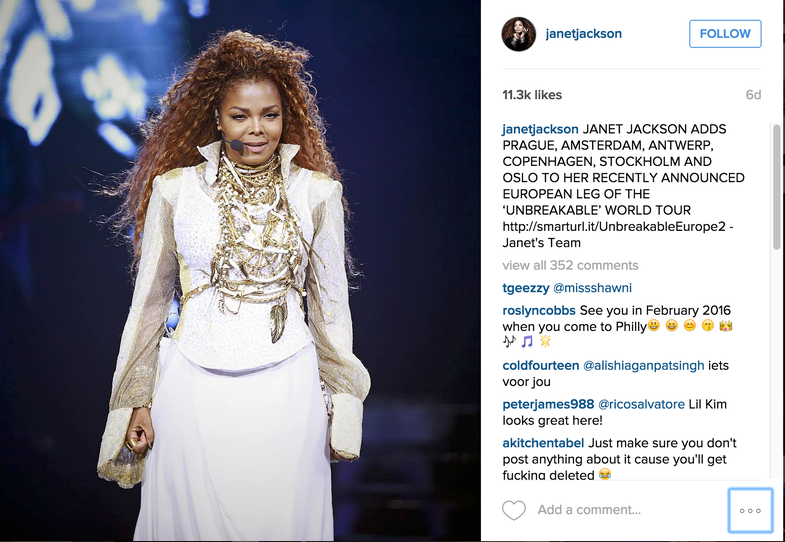 I love Instagram on the whole, but I’ve never been crazy about sharing, or even watching videos on it. The short time limit and the often very crummy quality don’t do much for me. But, people will forever share the short videos, even if they’re at a Janet Jackson concert, which it turns out, ended up with some users getting banned all together.

According to a TMZ report, the users in question were posting short videos Jackson’s set, which is copyrighted material, and it resulted in them getting banned from Instagram all together. Later, Instagram came out and said that some of the users were banned by accident, and only repeat uploaders should have gotten the hammer.

Page Six is also reporting that some users who uploaded “pics” were banned from the service, but they don’t actually provide any proof of that in the form of embedded posts or anything, so it seems like it may have just been video uploaders.

There has been a bit of an uproar from the community calling for Jackson’s proverbial head, especially after earlier this week, reports about a contract for photographers at her shows only allowed them 30-seconds to photograph her and they were asked to give up all the rights to the photos they shot. Gross.

While the contract is certainly worth mentioning in a negative light, policing videos of the live show has a much more familiar precedent. The music in the videos, after all, is copyrighted material. If you were to make a 15 second video and use a Janet Jackson song as the soundtrack, you’d probably expect to get nailed for it. This is a similar situation.

Of course, while the decision may be totally in line with the law, it still points to an industry that’s overall kind of tone deaf to the way people actually exist here in 2015. People Instagram things. They shoot short videos with their phones and post selfies in every possible location. By imposing strict and severe limits on social sharing, limits are being placed on something’s overall cultural relevance.

We, as photographers, demand that our intellectual property rights are protected. This case certainly isn’t as cut and dry as someone stealing and reposting your photo, but the internet’s rubber band-like snap responses to everything seems like it can actually hurt the conversation rather than encouraging it. Surely there’s a better method to deal with this than banning and legal action, but it’s going to require some work from both sides.