Quintin Lake on walking and photographing all 11,000 kilometers of the British coastline 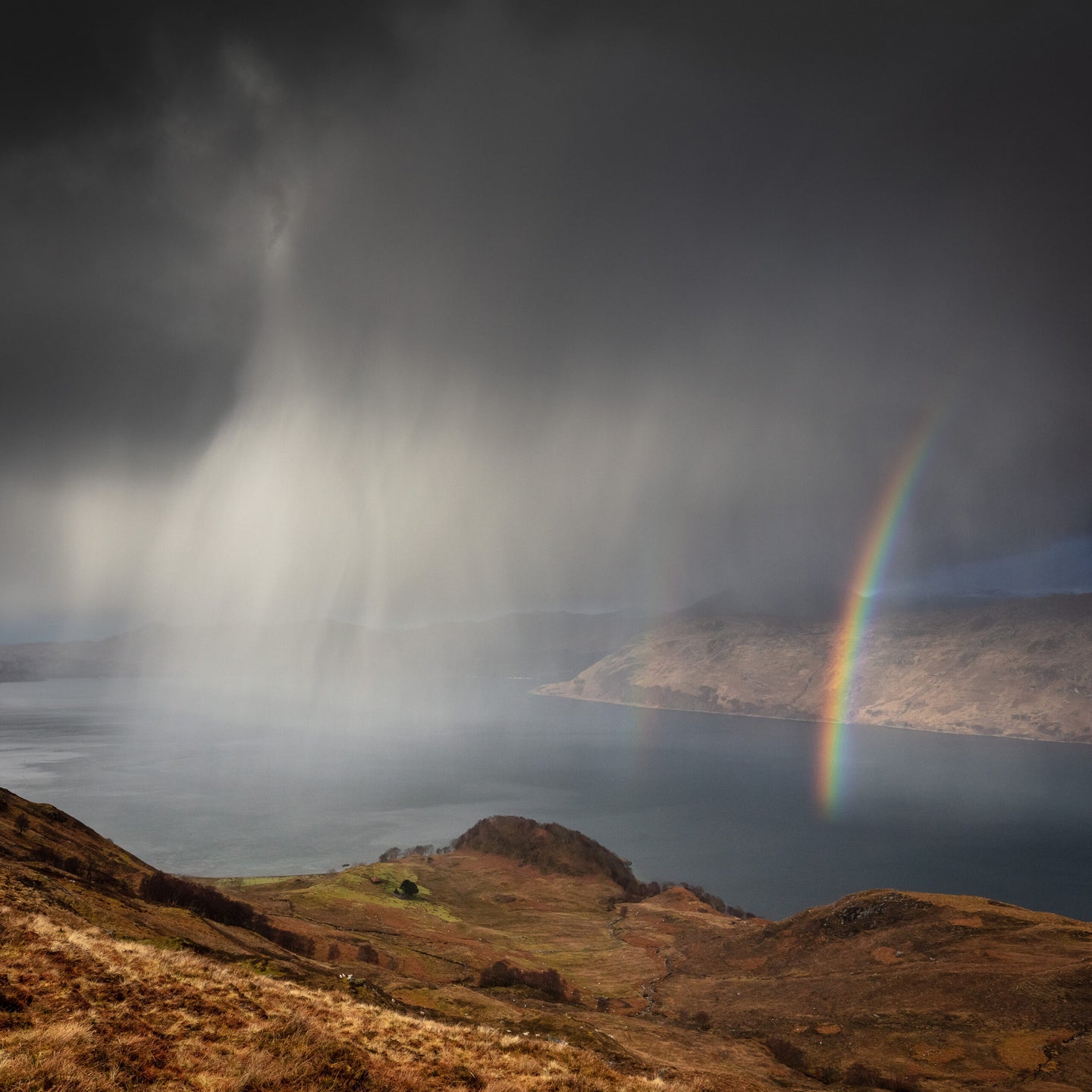 Scottish sublime. North Morar in the foreground with Knoydart behind the rainbow over Loch Nevis. Quintin Lake
SHARE

In April 2015, Quintin Lake set out to walk the entire perimeter of the coast of Great Britain, photographing the edges of the land where it intersects with the sea. He didn’t plan to do this uninterrupted, but in sections up to two months, after which he would return home for a while. This 11,000-kilometer (6,835-mile) journey ended in September 2020, after injuries, COVID-19 lockdowns, and plenty of terrible weather. His project is called The Perimeter.

Why did you choose such a daunting project?

I guess I just felt really inspired. As a photographer, inspiration is the thing where, if you feel you’re struck by it, you don’t want to let it go. I felt really inspired by all the intertwined layers of history and geography on the coast of Britain, which makes it hard to define. I felt really inspired by that ambiguity, and I wanted to see more of it and to understand what made this island what it is, because I’ve previously always found inspiration in kind of exotic places, like the Arctic, or deserts, or [places like] Iran. This was me going back to my roots, trying to understand what home is.

Related: Before color photography, there was the Lippmann process

What is your main genre as a professional photographer?

I pay the bills mostly by being an architectural photographer. My background was as an architect, and that’s how I earned a living for many years. I would use that money to buy time to do interesting trips, such as going to the Arctic. Now, I think more strongly as an art photographer, at least, that’s how it feels.

‌How much time did you spend preparing before you started your walk?

I guess with any kind of big project like this, you can’t think about it too much, because there are so many problems and difficulties. I think there was a two-week period between having the idea and starting. I thought, in a way, the stakes are quite low; if it doesn’t work, I can just stop.

I was really surprised because I thought no one would care about this project until there was a book or other physical object. But there was something about it; I had a BBC interview after two weeks of walking, and all I was doing was tweeting. And when that happened, it led to other people being interested. And then I felt, I’ve really got to finish this now! I felt people were rooting me on. I thought it would be just a private thing for me for years.

What did you tell people you met as you were walking? Did they believe that you were planning to walk 11,000 kilometers around the coast?

It sounds crazy. But the beautiful thing here in Britain is that everyone said, ‘Wow, that’s amazing. I’d love to do that.’ No one said crazy. Sometimes I got mistaken for a vagrant, many times I got mistaken for being a bird watcher, because of my long lens, and there were some misunderstandings. But when I was talking to people, and I told them what I was doing, they were really positive about it.

I think the British just love the coast. And most people have some connection with walking or enjoy that for recreation. And everyone knows a bit of the coast from their childhood or a special holiday. And the idea of just keeping on going, I think appeals to people. Though some people I met thought it would be all sandy beaches and ice cream!

‌What about gear? You’re someone who is used to hiking and walking, and you’re in good physical condition but you still had to carry a lot of gear. How much did all of your gear weigh?

My backpacking gear was was light in England; six to eight kilograms (13.2 to 17.6 lbs) without food and water. But then my photography gear was four to five kilograms (8.8 to 11 lbs) extra, depending on what I took. As I got fitter, as the journey went on, I actually ended up taking more gear, bigger tripods, and I took a drone. In the north of Scotland, with heavy winter gear, it was about 20 kilograms(44 lbs) base weight, and with food and water, that could go up to 25 kilograms (55 lbs). In England, it was more like half of that.

(Here is a detailed breakdown of all Quintin’s summer gear, with precise weights.)

What sort of camera did you use?

I used a Canon EOS 5DS R, which, at the time, was the highest resolution full-frame camera that was weather sealed. I took a 70-300mm lens, and I think around half of my pictures are on the longer end of that telephoto. I also took a 16-35mm wide zoom.

‌All your photos are in a square format. Why did you choose square?

What I’m interested in is a kind of geometry and serenity and stillness. I’ve done a couple of other projects, following the Thames and the Severn rivers, in that square format, and I found that was really inspiring. It was good for me in terms of interpreting the landscape that way. With the coast, because one generally thinks of horizontal seascapes, that seemed kind of perverse, and it helped me look at look at things creatively with a constraint that was a bit fresher.

I think that detail, or that abstraction, can actually reveal more about the subject and then the whole, and I think it helps the viewer focus and helps focus me as well. This week, I’ve been editing the Forth Bridge, the iconic bridge next to Edinburgh in Scotland; it’s probably one of the most photographed subjects in Scotland. It’s fantastically beautiful and interesting, but I’ve been trying to find a very pared-down image of it. It’s a different way of looking at the subject, and I find that approach helpful, especially on a well known subject like that.

‌Is this approach partly influenced by you being an architectural photographer?

A portfolio of images I’d give to an architectural client would have 20 images, probably five of those would be detail shots; I would see that as part of the story of any given building. And I guess I’m interested in materials and geometry, and I tend to look for that, whether it’s a landscape or a human-made object.

‌I imagine that as you walk along the coast, you spend hours each day, and you see iconic locations in the UK where people shoot photos, such as Durdle Door in Dorset, or the white cliffs of Dover. But it looks like every half mile or so you found an incredibly interesting thing to photograph. And it makes me realize that if photographers just look carefully, there are always interesting things to photograph around them. They don’t have to be the iconic bits of the landscape.

I agree. There is beauty and interesting things wherever you happen to look, if you open your eyes and do look, but I was surprised that every single day had glimmers, sparks of beauty and interest. And some days were like an opera of joy. I did think, at the beginning, there would be some days where I wouldn’t produce any images, but even on days where there was maybe a storm all day, there would be a moment where the storm would lessen. And some of these images turn out to be quite good, they sort of look like tracing paper, layers of gray in Scotland, and that was quite interesting in its own way.

Yes, that’s right. I did have quite a few injuries and problems. I had a torn tendon, I had shin splints, and the constant challenge of hypothermia, because I walked through all the seasons and it’s often very wet. I got slightly traumatized by the rain in the northwest in the winter. There was so much rain, and it was so cold all the time, that you had to keep moving to not get cold. And then when I came back down south, and it rained, I braced myself for being cold and wet for two days nonstop. And of course, it’s not like that, because it just blows away.

‌Not many of your photos have people in them. Why is that?

I tried to photograph someone most days, so there’s a bit more at the end but I often didn’t see anyone for days at a time, let alone photograph them. But I don’t think it’s my strength as a photographer. Also, for me, the mystery and the stuff of interest of what makes Britain Britain is the landscape. It’s misunderstood and often stereotyped in a kind of butter packaging way of rolling hills. I’m interested in the power stations next to the disused factories, all that kind of stuff as well as the ancient mythologies. I think if you get an interesting landscape, and you put someone in it, the person is always going to be more interesting. The human form and the human face are so compelling that it means that you can’t see the landscape. So for what I wanted to do, which was an exploration of the pure landscape, I consciously didn’t have people in it most of the time.

So you’ve been in the editing stage for quite some time. How many photos do you have altogether?

It was 454 days of walking, and that equates to 179,000 images. So each day was around 300 or 400 images, most of which were bad. I would normally edit that down to around 20 that I think are okay, and every few days there’s a really special one. Each day of walking takes between one and three days of editing. I finished editing day 364 yesterday, which is well over three-quarters of the way; I’ve got 90 days left. The whole project will take seven years: five walking and two editing.

Sometimes, everything synchronizes: the subject, the light, my energy levels, and I got really strong images. I’m thinking now of Knoydart, which is a very wild, uninhabited part of Scotland, where I shot a rainbow in a storm. It seemed like a different season every few minutes; it was just so extraordinary and exciting. I think I spent about a week, in terms of hours of editing just that one day’s images, because I felt there’s so much material there. Conversely, if it’s been a very rainy day, I might be able to edit it in a few hours, because there are only three images that come out. And then once I’ve edited [the images], I put it on my on the blog and share it, and then that will be the source material for what happens next.

I won’t be finished editing till the summer. When this is finished, it will be publishing a book, and producing an exhibition. Financially and psychologically I doubt I could do a project like this again as it’s been such a labor of love. I’m a bit fearful of how I will feel when that last image is exported from Lightroom and the project is finally finished. Exploring the world with a tent is in my DNA, and I will never stop that as it stimulated my creativity and makes me feel the most alive.