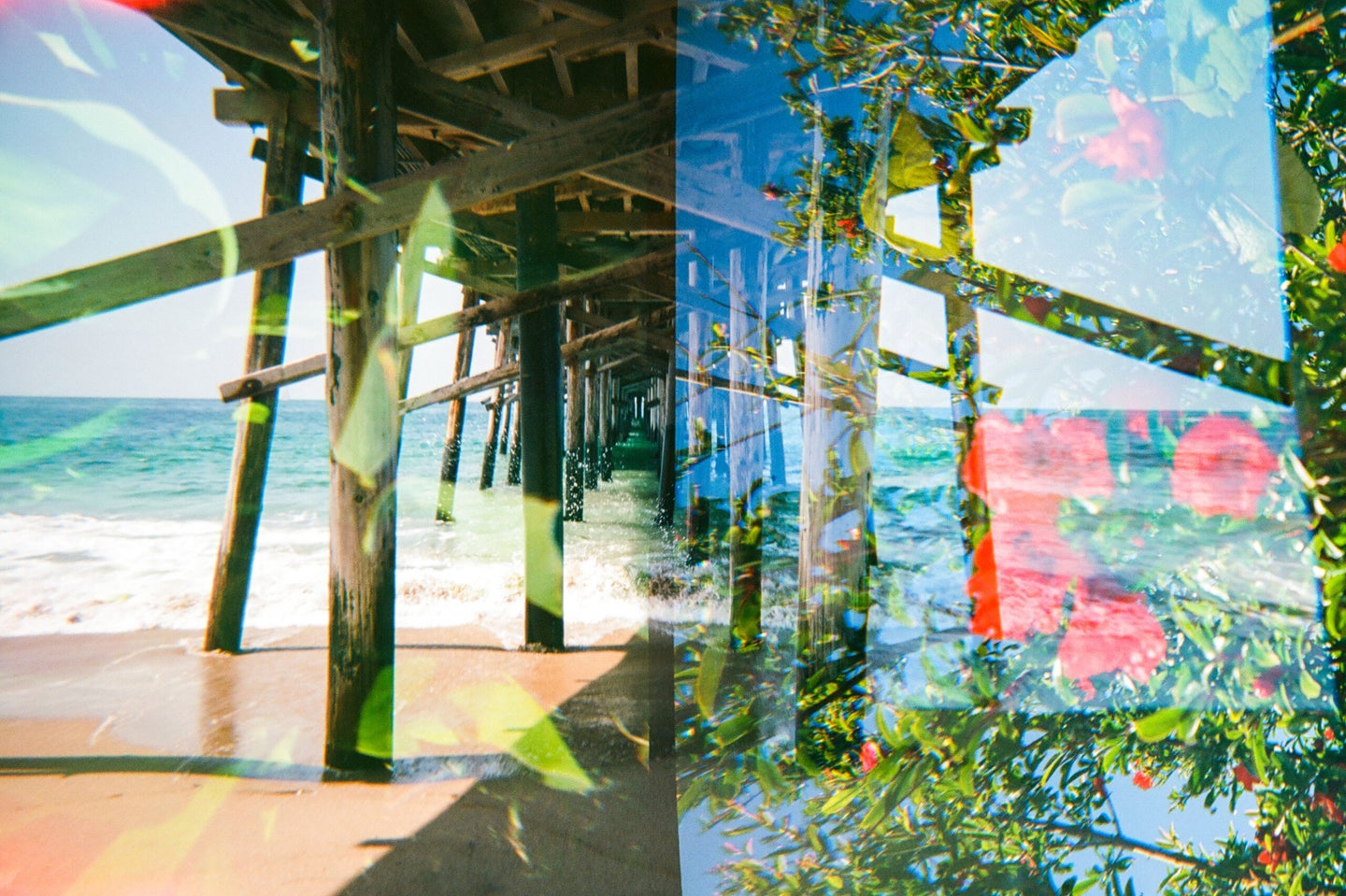 Lawrence enjoys finding ways to put a spin on popular photo locations, such as this pier in San Clemente, California. Jennifer Lawrence
SHARE

Jennifer Lawrence is all about colorful chaos. With some signature Kodak Ektar film loaded and ready to go, this Chicago-based lifestyle photographer lives, breathes, and sleeps color, all while embracing experimentation along the way.

As the weather warms and summer comes swinging in, we chatted with Lawrence about her sources of inspiration, all the colorful props in her gear bag, how she got back into film after the digital revolution, and how she’s helping photographers reignite their own colorful creativity.

“I love the fact that more people are getting colorful and shooting, whether it’s film soup (submerging film in liquid to change the emulsion) or double exposures,” she says. “The more I can do in-camera to create amazingness, the better. I didn’t do any of this with digital.”

Switching back to film from digital

Like many, Lawrence had traded in her film camera for a snazzy DSLR during the “digital revolution.” However, as much as she tried, it just wasn’t hitting her vision.

“I just love color in life,” she shares. “I’ve always tried to achieve that look with digital…I could never make it as bright and colorful as I wanted, or as I saw it in my head. And then Ektar, it’s just magic for it.”

She fell back into film after attending a workshop. Though she came as a digital photographer, the workshop had a film focus, and that’s when things started to click. Lawrence began teaching herself, mainly through trial and error. Back then, there weren’t many workshops catering to photographers outside of the fine art and wedding fields.

Early on, she shot a roll of what is now her signature film, Ektar, and one of those images featuring a pink inner tube remains her favorite and most iconic to date. “That was the image that literally started my love of Ektar,” Lawrence recalls. “That was it. That was my first ever Ektar roll.”

Now, film is pretty much all she shoots—Lawrence is loath to pull out a digital camera. Her go-to’s for professional work are a Pentax 645N and a Canon EOS-1v. For personal work, she has a dedicated Canon 1v which has seen pretty much everything. Having been submerged in the ocean as well as sand, she loves it but knows it won’t last long.

“It’s rusting out,” she says, laughing. “I don’t know when it’s going to die on me, but it will die on me one day.” Until then, though, you’ll find her with it at her favorite place—the beach.

What’s in her gear bag—garlands included

“Target Christmas bins? Those are a gold mine,” Lawrence admits. She’s pulling props out of her bag—sparkly pink garlands and prisms are just a few of the things to emerge. Around here, experimentation happens without hesitation, and the whacky results are embraced with enthusiasm. “It’s trial and error. There’s so much cool stuff.”

The Target Christmas bins aren’t the only hot place to search for fun visual effects. On shoots, sometimes Lawrence will pick flowers. One time, she carried a palm leaf to the beach. Even sheer fabric has come in handy.

“There’s a picture of a girl on the beach [I did] with polka dots on her,” Lawrence shares. “It’s one of my favorite photos ever. She’s on the beach with little polka dot shadows all over her. It’s just really cool.”

Then there is the famous floaty. Anyone who follows Lawrence on Instagram is no stranger to the happy, summery photograph of a pink innertube’s shadow on the concrete.

“I will find specific floats, because I want to see their shadows,” Lawrence explains. “Pink and blue, sometimes orange, or stripes. Anything that the light will shine through and you can see the color either in the ocean or on the wall or the ground or the sand. I will pack those and I won’t let anyone take them. Those are coming home with me.”

Drawing on her own learning experience when there wasn’t much catering to those who didn’t do weddings, Lawrence created two workshops: Film Camp and Hello Happy. The former serves as a boot camp for those wanting hands-on instruction in their own foray into film, with access to instructors including photographers, labs, and film manufacturers like Kodak.

“I was teaching myself, I was getting film back and they were underexposed and muddy,” Lawrence remembers of her first foray. “Film is pretty difficult. It’s kind of like a foreign language because it’s the exact opposite of shooting digital. It was a tough learning curve for me, or tougher than I thought it should be, and there was no education out there unless you were shooting fine art, beautiful Italian villa weddings. And that wasn’t me. Film Camp [is] what I wanted to have when I was first learning.”

Meanwhile, Hello Happy is more of a fun, relaxed workshop focusing on spontaneous inspiration and experimentation.

“What if you just want to be all creative and have fun with color and happiness and doubles [exposures] and just all the goodness?” Lawrence says, explaining the concept. “It was just more of a creative escape, for those who already can shoot film.”

Though price hikes and manufacturing delays make the future of film seem shaky at times, the magic it creates is worth the effort, even in a digital world.

“Faster and digital are not always better,” Lawrence finishes. “We’re getting the resurgence of actual [photo] albums again. [Film] does look better. And it’s just a cooler process.”