Majesty, mystery, and a dash of daring reign in these mountaineering photos

The winners of the eighth annual CVCEPHOTO contest, hosted by a Spanish mountaineering club, have been announced. 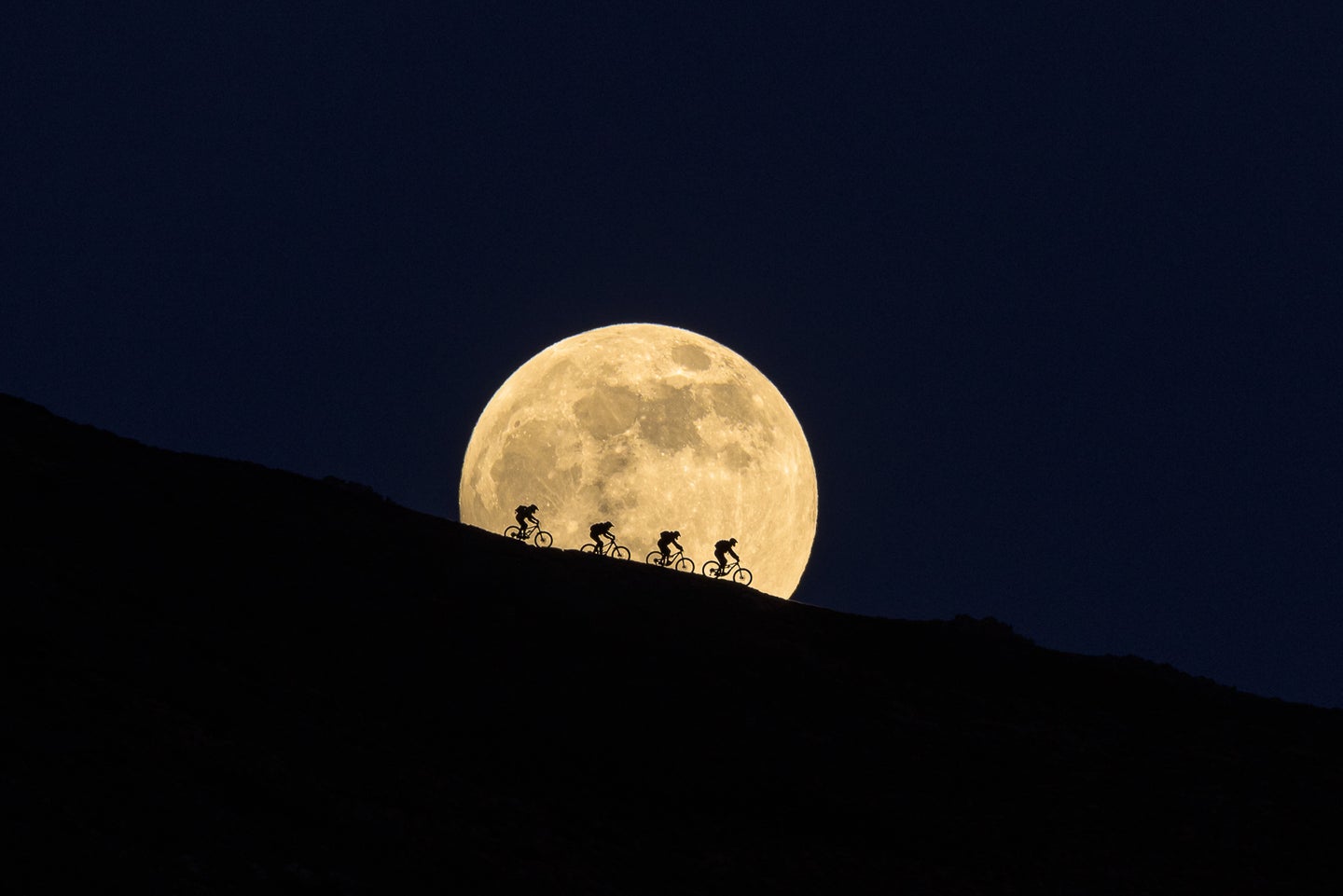 A lone skier sails past chillingly beautiful ice crystals. Two climbers hang precariously from a cliff at golden hour. Four cyclists ride in the glow of the moon. These are just a few of the thrilling entries of this year’s CVCEPHOTO contest, a program that  works to promote mountain sports and activities through photography.

Participants are invited to submit their very best images of any non-motorized sport that takes place in the mountains, including alpinism, climbing, skiing, trekking, speleology, and paragliding. Amateurs and professionals are eligible to enter.

The honorees include the top three photos, 15 honorable mentions, and two winners whose photos will appear as the BBK Mendi Film Bilbao-Bizkaia and International Alpine Film Festival Les Diablerets posters.

The first-place winner receives 1,400 euros and a trophy created by artist Iñgio Arístegui; second place, 700 euros; third place, 300 euros; and honorable mentions nab a diploma. The awards ceremony takes place on May 28 in San Sebastian, and the exhibition runs from May 30 to July 29 at the Club Vasco de Camping Elkartea.

Related: These dazzling photos of the Milky Way will take your breath away

First place winner Yhabril Moro shot this photo at the Freeride World Tour in Baqueira, after running into a friend. “In just a moment we improvised a plan at sunset, and he gave me the best photo of the day, better than all the ones I had taken from the pros,” Yhabril Moro recalls, noting that the shot required him to balance a host of factors. “For the composition I took into account the position of the rider, the sun and the snow trail, and I shot with an off-camera flash to [raise] the shadows and blacks of the rider who was dressed very dark.”

On a speleology (cave exploration) expedition with friends, Paul Zizka and his group were traveling past the toe of the Stutfield Glacier in Jasper National Park when they discovered this hole in the snow, covered in ice. Though the hole did not open to a larger cave, it did provide a quiet perspective to capture the beauty of winter.

“The view out of a small, hoar-frost-rimmed window made for great framing possibilities,” Zizka shares. “I waited for my friend Sasha to ski through the frame and liked the result. I felt it conveyed the magic of winter in the Canadian Rockies.”

With a little determination and some innovative framing, Jose Allende conveys the oppressive heat and scope of the desert. “I saw that the effect of the branches was very similar to a flame, showing just what I felt at that moment in the middle of the desert,” Jose Allende says. “I managed to photograph the climbers and give that feeling of desert heat to the image.”

A skier dashes through the snow, leaving nothing but a puff of powder in their wake. “One of those perfect powder days you dream about,” Sandi Bertoncelj writes. “Super light powder and perfectly spaced trees. What more could you ask for?”

In the magic of the moonlight, four cyclists traverse a potentially rocky mountain trail. Where are they going? The mystery and energy is palpable. “The day of the photo the weather was cold and windy,” Moro, a double honoree, recounts. “It took us several attempts. I also had to move to correct my position as the moon kept rising, whilst they had to push the bikes back up to ride again until I got the composition I was looking for. In the end we were very happy with the result and we got this photo and many others to remember the night.”

Some of our other favorites

Just barely perceptible in the distance is a bright yellow kayak that seems to be tumbling into the abyss of Aldeyjarfoss in Iceland. That is, until you learn that for extreme kayakers, this is probably nothing. “It’s one of the most scenic waterfalls I have ever seen due to the energy of the water and the strange basalt rock formations on its sides,” David Nogales says. “It was late afternoon and the sun wasn’t quite as strong so we had this epic dim light.”

“Elena Poli in the arch.”

The light, the framing, and the human element show off the sheer scope of nature. Christian Core spent years contemplating on how he’d capture the majesty.

“As soon as I returned to Italy, I immediately went back there with my friend, Elena Poli, and finally took exactly the same image that was so clear in my mind,” Christian Core shares. “I climbed for a few meters [on] a route in the middle of the cave, opposite [the] side of the arch, hung on a bolt and took this photo.”

In the absence of extreme sports and a human element to put nature in perspective, seeing the mountains in the distance, under a blanket of stars, feels serene and peaceful. “I took this picture near a new moon phase,” Nicolai Brügger explains. “I was up there with some friends and spent the night at the lake to shoot the Milky Way.”

Participants can enter their images between January 1 and March 31. Winners are notified on May 6, with a ceremony and exposition on May 28. Dates are subject to change, so keep up with the latest news on the contest website.