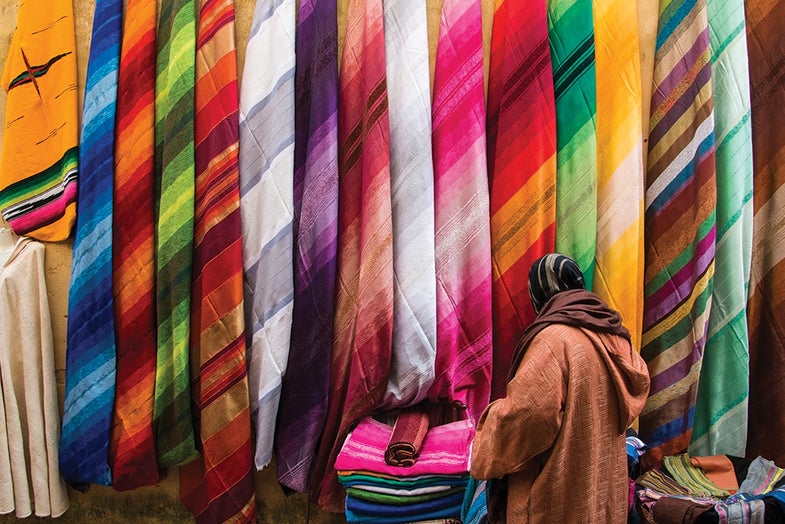 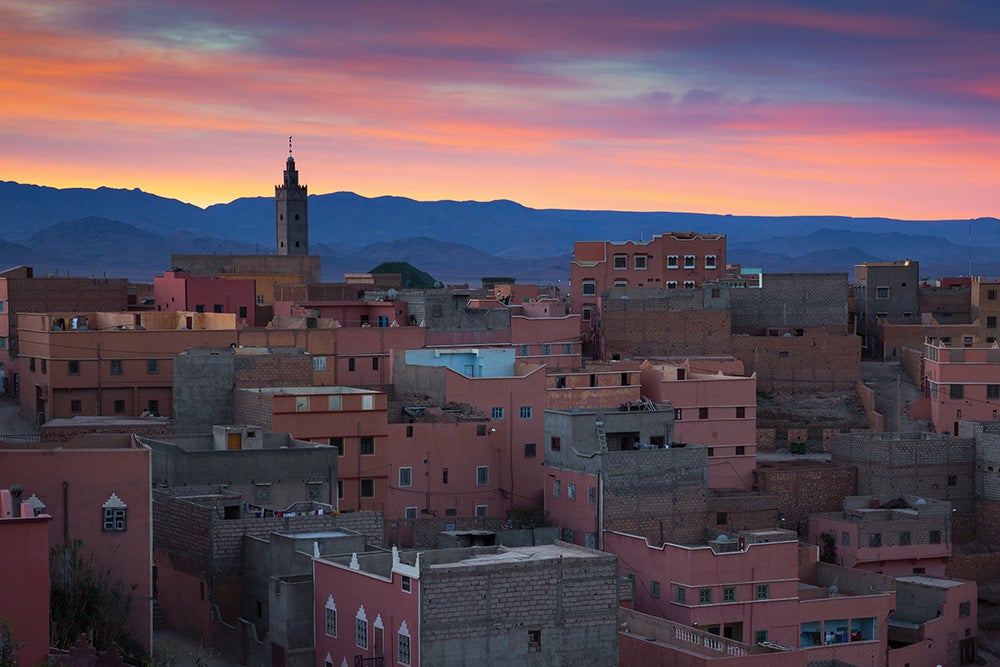 Snow-capped mountains, Sahara nights, bustling markets in walled medinas, snake charmers, and even a stretch of windswept beach. Morocco delivers photos you once only dreamed of capturing. Here is how to make it happen.

Some basics: Morocco is located in northwest Africa on the Mediterranean and Atlantic coasts. Most Moroccans are either Arabs, Berbers, or a mixture of the two. The predominant religion is Islam. Women—and men, too, for that matter—should take care to dress modestly, especially in places of religious significance and in rural areas of the country. Moroccans are very tolerant people, but when visiting mosques, they expect women to be covered from the wrists to the ankles and men from the to just below the knees.

The country’s official languages are Berber and Arabic, though many citizens speak French as well. You’ll hear English spoken by hotel staff and the like and in major cities such as Rabat, the capital, and Casablanca, Morocco’s largest city and the point of entry for most foreign tourists. You’ll need a passport to visit, but U.S. citizens don’t need to obtain a tourist visa in advance.

While Morocco is generally safe, be as cautious as you would be visiting any major tourist area. We recommend traveling with a guide company or booking a photo tour. Without a guide, people may approach you in an effort to extract money. Be firm but polite if you don’t wish to be. Avoid uncooked foods and drink bottled water. The 220V electrical outlets fit a Europlug.

The best times to visit Morocco are during spring (April through June) and autumn (September through November), when the weather is mild and tourists are fewer. The summer months can be uncomfortably hot, especially inland, and they are the most popular times for foreign visitors. Avoid the Sahara in summer. Winter temperatures are comfortable during the day, but get cool at night (near 40° F)—you may even see snow. It snows heavily in the Atlas Mountains in winter, often making travel there impossible.

Morocco is full of stunning locations, including a mix of areas with landscape, wildlife, and travel opportunities. There’s no shortage of sights; here are the must-see highlights:

There’s plenty to see and do in Marrakech, including visits to the Palace of the Bahia, the Saadian Tombs, and the Koutoubia Mosque. For photographers, nothing compares to an evening visit to the vibrant Djemaa el-Fna, the Great Square of Marrakech, which comes alive at night with entertainers, storytellers, and tent restaurants. The terrace of a nearby café gives you a spectacular view of the square below; or jump in and immerse yourself. Just make sure to keep your wallet and passport in a safe place; hustlers and pickpockets work every night!

Chefchaouen is a charming small town with steep, narrow streets and passageways set in the spectacular Rif Mountains of northern Morocco. Best known as the Blue City, the painted houses, sidewalks, and ornate doors are a photographer’s dream. Morning, late evening, and even early nightfall are the best times to capture scenes of provincial Moroccan life: commuters walking to and from work, children playing in a courtyard, flowers in blue-framed window planters.

The High Atlas Mountains offer landscape and nature photographers a true wilderness setting. The range arcs across southeastern Morocco and includes the renowned Jbel Toubkal, the highest peak, measuring 13,671 feet. Its tallest summits remain covered in snow all year and spawn spectacular waterfalls, such as the beautiful Ouzoud Falls.

The High Atlas are also home to Barbary macaques, a species of old-world monkey easily spotted near roads along high mountain passes. The macaques are social and approachable—a telephoto lens of no more than 200mm to 300mm is all you need—and extremely photogenic.

No visit to Morocco is complete without a trip into the mighty Sahara. The Great Desert spans almost all of North Africa. A tour can take you into the desert on camels for an overnight stay (or longer) in a comfortable Berber camp. The best times to photograph the massive dunes are sunrise and sunset, when the light is colorful and at a low angle, revealing shadows and textures. Capture camel trains departing from camp in the early morning; climb up on a nearby dune for a compelling aerial perspective.

Since Casablanca is home to Morocco’s major international airport (Mohammed V International), visitors to the country will likely spend at least some time in the country’s largest and most cosmopolitan city. But too many make the error of using Casablanca as only a point of transit. Casablanca is home to the largest mosque in Africa, the Hassan II, which features stunning modern architecture and a 60-story minaret. Overlooking the Atlantic Ocean, the mosque affords dazzling views at sunset and sunrise.

These twin cities sit in the crook of Morocco’s northwest coast. Rabat has a modern landscape of government offices and national monuments: the King’s Palace, the Hassan Tower (the minaret of an incomplete mosque), the Mausoleum of Mohammed V, and more. Along the shore, the Atlantic surf pounds castle ruins as the Rabat Lighthouse stands guard.

Salé, on the other side of the scenic Bou Regreg River, is the oldest city on the Atlantic seaboard. Founded a few centuries BCE by the Phoenicians, Salé later became home to 17th-century pirates, the “Salée Rovers” written into the pages of Daniel Defoe’s Robinson Crusoe. On the old streets of Salé, merchants, craftsmen, and bakers conduct their business not unlike their ancestors. Photograph Sale’s impressive religious monuments, dozens of old mosques, and an ornate 14th-century madrasa.

Morocco’s Atlantic coast is mostly lonely, windswept beauty. Although not ideal for swimming or sunbathing—the water is frigid—it’s ideal for the adventurous photographer.

Legzira Beach is ranked as one of the world’s most beautiful beaches, with spectacular red cliffs, natural tunnels, and enormous sea arches. Six miles north of the city of Sidi Ifni, Legzira is a perfect evening photo location; capture the setting sun over the sea and the low-angled light on the cliffs and archways.

The harbor in Essaouira, a laid- back fishing town, is a great place to photograph the old-world boats and port. A small no-cars-allowed medina in the center of town has quaint bazaars and souqs (markets) to shoot in the middle of the day; return to the harbor at sunset.

Long considered the cultural and spiritual capital of Morocco, Fes served as the country’s political capital until 1925. Get great views of the city atop the Ramparts, old castle walls encircling the city. But to experience the best of Fes, visit the ancient walled medinas in the heart of the city. The larger of the two, Fes el Bali, is one of the largest vehicle- free urban areas in the world and is a UNESCO World Heritage Site.

To explore its narrow streets and alleys you’ll need a guide—the medina is a bewildering maze. Your local guide can also help establish a rapport with townspeople and craftsmen, who can sometimes be shy and camera-averse. A versatile zoom lens with a wide focal range will ensure that you’re ready for anything at any time.