To see landscapes in a whole new light, shoot from a bird's-eye view 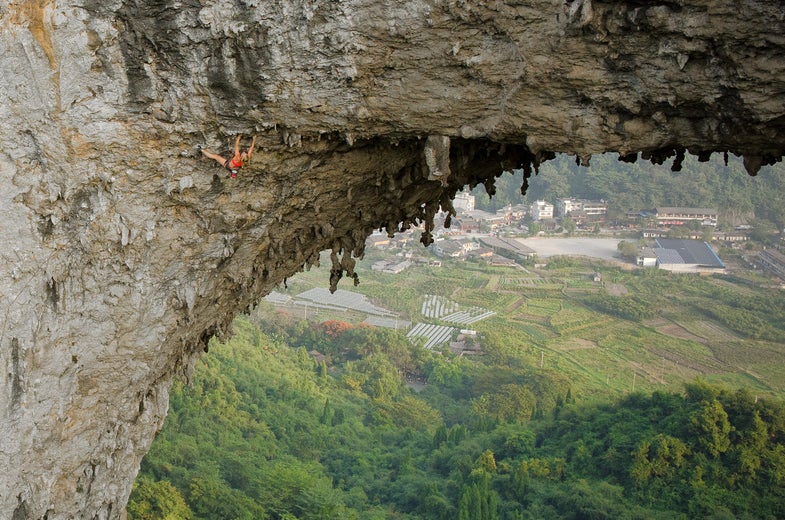 More than half a century before the airplane took flight, photographers sent their cameras skyward using kites and balloons. Shooting from the air lets you capture terrain—meandering rivers, desert rock formations, offshore reefs—that are best appreciated from above. To get that perspective today, nature photographers are increasingly turning to remotely controlled unmanned aerial vehicles (UAVs)—otherwise known as drones.

In just the past two years, drone technology has evolved from the DIY projects of fringe hobbyists to sophisticated products anyone can buy. The freedom of flying your own drone is exhilarating, and the ability to use it to lift a camera into the air opens up new creative opportunities. Journalists use drones to cover news, real estate photographers use them to shoot properties, and even wedding photographers use them to cover events. Their most exciting application? Nature photography.

When I travel to remote settings I sometimes hire a small airplane or helicopter to shoot aerials—a costly tool of the trade that isn’t always an option. While a drone can’t fly long distances or at high altitudes, it can capture aerial images for the cost of a battery charge. (That is, as long as your unmanned craft lands safely.)

Traditionally, when photographing from an aircraft, a pilot flies at least 1,000 feet above the terrain and the photographer shoots with a slightly wide-angle to telephoto lens. Aerial images from a drone are created from much lower elevations. This perspective allows you to shoot with a fisheye or super wide-angle lens and capture more intimate and previously unseen views.

Multirotor drones include four-propeller quadcopters, six-propeller hexacopters, and eight-propeller octocopters. Depending on the size of the craft, it is possible to carry your camera into remote locations that are otherwise inaccessible to aircraft. The drones that afford the best access are quadcopters equipped with a GoPro or similarly small action camera, but larger drones are capable of lifting an interchangeable lens compact, a full-size DSLR, or a video camera system.

These larger drones, typically hexcopters or octocopters, range in diameter from 2.3 feet (700mm) to more than 3.3 feet (1 meter). They have more powerful motors, larger propellers, and heavier lithium polymer (LiPo) batteries than quads. They’re also more expensive and significantly larger, which is another serious consideration for any nature photographer planning to travel with one.

Cornforth captured this view of La Perouse Bay in Maui, Hawaii, using the same gear as on the previous spread. Exposure: 1/500 sec at f/5.0, ISO 400.

How to Buy a Drone

Paul Souders, who photographed the elephant shown here, has tried to fly a Panasonic Lumix ILC on his DJI Phantom, but the camera weighed so much that it could barely get off the ground. Chad Copeland, who photographed the images of China in this story, has been flying drones for more than five years. His octocopter alone cost more than $20,000, and he has also experienced a few crashes.

Within a few weeks of purchasing my first drone capable of flying my GoPro, I realized that I needed to fly a bigger camera with greater resolution. I initially decided to use a Canon Rebel SL1 with a 20mm f/3.5 Voigtländer pancake lens, then I soon graduated to the lighter Canon EOS M ILC with an 11–22mm f/4–5.6 Canon IS STM lens. After submerging that camera in a river during my most recent unanticipated landing, I switched over to a Sony NEX-5 with a 12mm Rokinon f/2 lens. All of these cameras use an APS-C size sensor with a 16MP to 18MP pixel count and cost less than $1,000. As much as I would like even more resolution, I simply cannot justify the risk of flying my expensive Canon EOS 5D Mark III or Sony a7R camera bodies (though Copeland is willing to fly a Nikon D4s and a $42,000 RED Epic on his octocopter).

There seems to be a new drone every day, so it’s easy to become overwhelmed by options. First decide whether you need one that is ready to fly (RTF) or if you’re willing and able to build one. When I researched how much it would cost to buy a medium-size hexacopter, I realized that I could assemble one for about half the price. I didn’t know the first thing about soldering or programming a radio control, so I made mistakes. Unless you have a lot of free time, I would encourage the RTF route.

Drones require a fair amount of tinkering and troubleshooting, so building your own can make a critical difference. If I am getting ready to take off but one of my motors isn’t working, I can trace the wiring to find a break in the connection because I assembled it.

The most exciting aspect of flying a drone with a camera is the ability to see what the camera sees through the first person view (FPV) system. This involves outputting the camera’s live view signal through a transmitter and viewing it on a monitor on the ground. This way I can pilot my drone to frame the perfect composition. It also makes flying easier, since the control orientation of my drone (left, right, forward, and backward) always stays the same. Some drone operators wear FPV goggles; I prefer a monitor so I can look up and see my drone in the sky.

When I get ready to fly, the first thing I do is look for a safe and level spot, far from trees or power lines, from which to operate. I ask that no one enter this space when the drone is in flight. Soon the anticipation of flying begins to set in. I go over my mental checklist, but I also talk to myself out loud about what I’m doing. If other people are nearby, I ask them not to distract me while I’m flying. I need to concentrate, especially during takeoff and landing.

I set my camera’s exposure on the ground, since I can’t do so once it’s in the air. I usually shoot in manual mode and try to keep shutter speed around 1/500 second and ISO under 800. I remotely trigger the shutter from my radio control via a signal to an infrared trigger attached to my camera.

I use Google Earth to research a location before I fly over it. This allows me to virtually scout a scene. Once my drone is in the air, I tour the landscape at various distances and altitudes. Typically, I’ll fly 200 yards to 400 yards out and anywhere from 75 feet to 300 feet in the air. My radio control has two sticks: the left to control throttle and yaw (rotation), and the right for forward/backward and left/right. While making quick decisions during my initial flight, I usually identify exactly where I will return to during my subsequent flights and spend the maximum amount of time hovering and shooting as the light or conditions change. 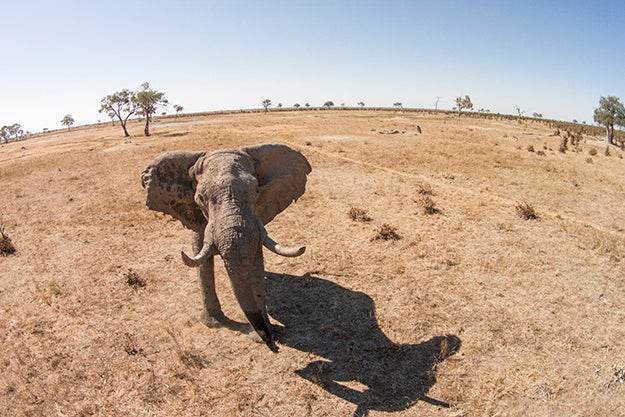 I attempted my first aerial photographs by tying a camera to a kite. After crashing this rig into a coral reef in Tonga and a colony of elephant seals on South Georgia Island, I gave up. As drones became more popular, I decided to give my aerial ambitions another go. In 2013 I had hoped to fly my DJI S800 over thousands of beluga whales in Canada, but it flew out of control and crashed. Since building my first Tarot hexacopter, I’ve made most of my aerial photos—now more successful than my initial tries—over the ocean near Hawaii and California; I’m getting ready to travel with a drone to the Arctic this year. 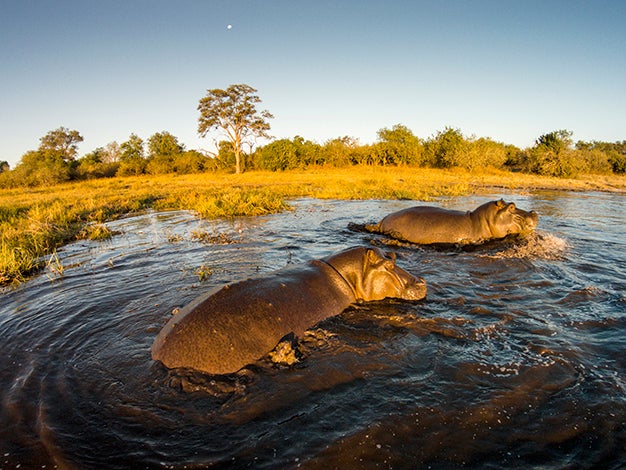 Souders captured these hippos at the Moremi Game Reserve in Botswana using the same gear as with the elephant on the previous page; 1/400 sec at f/2.8, ISO 100. Photo by Paul Souders

Souders’s favorite aerial subjects are the same ones that he shoots from eye level and underwater: the landscapes and wildlife of the African savannah and in the polar latitudes. His first aerial rig was a Canon EOS 5D flying off a kite. He got some interesting shots of nesting penguins and shore birds in Antarctica that he never would have achieved otherwise. It cost him less than $150 to put his camera in the air, but then more than $3,000 when his kite and camera fell into the ocean. In 2013 he took his first Phantom drone to Africa, and in 2014 he took a Phantom Vision 2+ to Africa and the Arctic and made some beautiful images of wildlife, including elephants. The resolution of his cameras fell short of his expectations, so he’s going to try again this year, with his first Tarot 680 Pro hexacopter.

Copeland, who spent 10 years in the Air Force and worked as an air traffic controller before becoming a photographer, has been flying for about 15 years. On assignment for National Geographic in 2013, he flew China’s Stone Forest, a vast area of 100-foot limestone formations that from above look like sharp knife blades. These beautiful formations had never been filmed or photographed by drone before, and the new perspective was unbelievable. Flying his camera completely changed his view of photography. An adventure photographer at heart, his focus is extreme athletes.

Chad Copeland used the same Cinestar drone and Nikon camera as on the previous page to capture this scene above Yangshuo, China. Exposure: 1/800 sec at f/5.6, ISO 400.

If you decide to take up drone photography, you will sometimes experience moments of frustration. But the satisfaction of creating unique images will be your reward.