Experts weigh in on how to perfect structural shooting 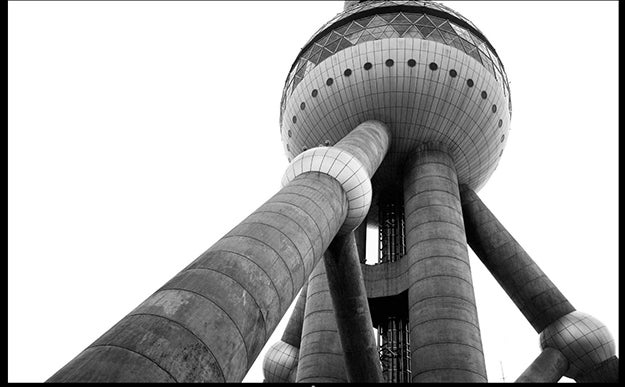 As humans, and as photographers, we’re drawn to structures. Cloud-kissing skyscrapers, simple suburban houses, cathedrals, ramshackle garden sheds—any kind of structure can make a great subject. Here, four masters of the genre explain how to make your architectural photographs soar.

“It’s what makes us human,” says Adrian Gaut of our fascination with making pictures of our structures, “the ability to transcend the environment.”

Gaut, a New York City–based commercial pro, whose images appear on pages 52 and 53, represents a breed of architectural photographers who make pictures not primarily for a design firm, but as part of larger projects or personal work.

Such artists combine their literal representations of buildings with an overlay of metaphor. As Christopher Griffith, also based in New York, puts it, photographing architecture is “a testament to the idea, the sensation, that it’s even possible to build these kinds of things—the sort of awe that human beings have at the ability to create [them].”

Anyone who feels this awe can learn to express it in photographs.

Your point of view, both in terms of where you set your camera and what the structure means to you, will be a defining feature of your architectural photographs. Shoot to find out what you are drawn to, and go from there.

Gaut’s style, for example, is dominated by angles and a closer perspective than is typically seen in architectural photography—a characteristic born of necessity. He had purchased a used 4×5 rig on eBay that he thought came with a 90mm lens (extra-wide on this large-format camera), but in fact was outfitted with a 210mm (short telephoto) lens. “At the time I couldn’t afford to buy other lenses,” he says. “So I started shooting with the longer lens and found I was able to get something more unique, and more consistent with my vision of architecture. It also allowed me to shoot buildings that I considered not necessarily interesting as a whole—but [whose details] held a lot of potential. Once I could afford more lenses, I still felt connected with that way of working.”

If Gaut is all about angles, Ashok Sinha, another New York–based photographer, is all about curves. His picture of the staircase in the Frank Gehry–designed Art Gallery of Ontario in Toronto is above. “I find a curve to be a strong visual element, especially for architecture, where everything is [usually] very straight. It adds a bit of flavor to the pictures—it makes them pop.”

Griffith, in the meantime, focuses on repeating patterns, as can be seen in his shot of the Shanghai Grand Theatre at right.

Matthias Haker, a Dresden-based commercial photographer, is clearly drawn to spirals and tubes, as can be seen in his photo of a station in the London underground on the facing page. “I’m fascinated by spiral staircases,” he says. “It’s a typical situation that I photograph a spiral staircase in some office building. . .and as the people who work there see me lying on the floor, they start to look up and actually realize how beautiful it [is]—even though they’re used to seeing it every day.”

The lesson? Think about what visual elements in the built environment most draw your own eye, and frame the scene in
a way that brings these elements to the forefront.

Identifying structures to photograph is “a mixture of serendipity and some planning,” Gaut says. “I travel a lot, and sometimes I’ll have a list of things that look interesting, sometimes from guidebooks. Sometimes I’ll file subjects away for future trips, but I’ve always got my eyes open.” His advice: Take a look at the building next to the one you were interested in. “Sometimes flagship buildings by major architects are less interesting than the ones that don’t get the press.”

For the image above, Sinha had a free day in Toronto on a commercial shoot, so he headed out. “I always love going to art galleries. The Art Gallery of Toronto is not only known for the collections but the architecture in general. And I had always wanted to see Gehry’s staircases.”

Like these two photographers, Haker tends to research buildings to photograph for his personal work, which he does on top of commercial assignments. “Before I travel, I spend a lot of time searching online for places of interest,” he says. “Photo communities have made that research easy. Besides those, I check books about architecture as well as architectural websites or forums.”

But some shooters find subjects without much of a search—you just have to look up. With mundane buildings, the challenge lies in transforming them through photography. “I’m never particularly concerned about the representation of reality,” Griffith says. “It’s very rare that I look at a building and say, ‘I want to be true to how it sits and lives in the environment and the horizon.’ I’m much more about how the three-dimensional world fits into a two-dimensional box. I’m always trying to make things look larger than life, more monumental.”

Because these four photographers are busy pros, they work a wide variety of jobs. And so they have settled on full-frame DSLRs and ILCs, primarily with zoom lenses. Gaut uses the Nikon D810-series cameras; Sinha prefers the Canon EOS 5D series; and Haker is a Sony man, working with Alpha 900, Alpha 7R, and Alpha 99.

“It gives me the right amount of flexibility across a lot of different jobs,” Gaut says of a full-frame DSLR system. “Still life, portraits, aerial—it’s a real boon for me.” For architectural work, he commonly uses a longer-than-expected 70–200mm f/2.8 AF Zoom Nikkor.

Griffith is the outlier of the bunch. For his architectural studies he uses a 4×5 Linhof Master Technika, Rodenstock lenses, and—take a deep breath—film. Architectural work is, he says, “oddly enough, not something that I necessarily make a living at. I do it for myself. There’s no crew, there’s no producer; it’s you and a 4×5 camera. It lets you get back to a solitary way of shooting.”

While for most of his commercial work, he’s all digital (Nikon As humans, and as photographers, we’re drawn to structures. Cloud-kissing skyscrapers, simple suburban houses, cathedrals, ramshackle garden sheds—any kind of structure can make a great subject. Here, four masters of the genre explain how to make your architectural photographs soar. By Dan Richards and D810s and a Hasselblad H4 with Leaf back), for personal work he likes shooting with film because, he says, it “forces you to make decisions. I can shoot everything under the sun if I shoot digital. With film, I’ll shoot two or three things and I’m done.” Griffith does make one concession to speed—he uses a Linhof viewfinder, similar to cinematographers’ framing optics, to establish starting compositions.

None of our four shooters are equipment-obsessive. As with most types of photography, making a great architectural image depends not on the subject or the gear you shoot it with but on the decisions you make while shooting. For that, these pros offer some nuggets of wisdom.

“Work with the equipment that you have, the equipment you’re comfortable with, and find an approach that works for you—in my case, shooting with longer lenses,” says Gaut.

Sinha urges you to pay attention to light. “I’m always observing light,” he says. “I am always making notes about light and looking at the shadows.” And don’t shy away from backlight. As he points out in his picture of the Frank Gehry staircase, the backlight coming from the ceiling and glinting off the wooden banisters defines the form.

Griffith has an unusual piece of advice: Shoot less. During a location still-life workshop he led, he directed participants to limit the number of pictures they would take in any given session to 50 clicks. As everyone was shooting digital, he relied on the honor system. “It’s like having 50 sheets of film,” he says. “That kind of discipline, and those kinds of exercises, really force you to home in on not the picture that you can take, but the picture that you want to take. The problem [with digital] is that it doesn’t hone your eye. I’m guilty of this as well. I’ll be shooting a commercial job, and after a day I’ll have shot 800 to a thousand pictures—how the hell did I shoot that many? This is not an anti-digital argument at all. It’s purely the exercise of patience, the patience of taking photographs and forcing yourself to really make decisions.”

“You don’t need amazing buildings to make interesting pictures,” adds Gaut. “The big lesson is to work with what you have and go from there. You can take a great picture with a so-so lens—if you’ve got the vision.”