How to use a reflector for dramatic eyes in portrait photography 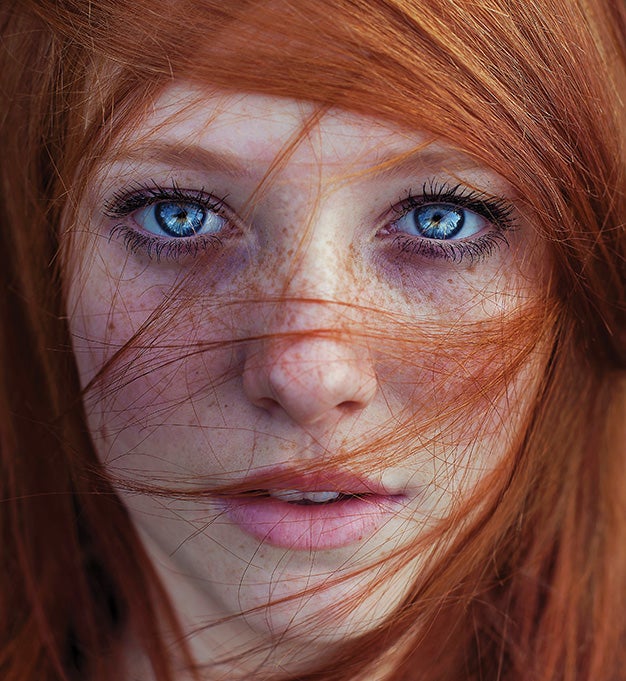 Topčagić exposed for 1/250 sec at f/4, ISO 100. The three settings are called "the exposure triangle" in her part of the world. _ Photo: Maja Topčagić_.
SHARE

Maja Topčagić, a 25-year-old photographer and photo retoucher from Sarajevo, Bosnia-Herzegovina, has a passion for photographing blue-eyed redheads. “Statistically, only about one percent of humanity has the combination of blue eyes and red hair,” says Topčagić. Her website presents some of the prettiest of that one percent in dozens and dozens of photos. “I started the project almost a year ago, and every month the collection grows,” says Topčagić, herself blue-eyed and occasionally a redhead.

Her go-to lighting for these alluring portraits is the ambient light of an overcast day, early or late when the low-lying sun throws an overall warm cast. For this shot, the light’s yellow/orange hue brought out the warm tones of her model’s hair and freckles, and, because it was diffuse, the lighting didn’t throw shadows across her face. In some ways, it’s perfect portrait light.

But it has a downside. Flat portrait lighting tends deemphasize a person’s eyes. Since one of Topčagić’s main intents was high-lighting the intriguing contrast between cool blue eyes and warm hair, flat light was a problem.

To solve it here, she turned to a circular silver lamé reflector. An assistant aimed it toward her model’s face, where it gave a specular, sparkling quality to the light that helped to accent the blue in what otherwise read as gray eyes. “Even though the model had really big, vibrant blue eyes, the reflector was needed to highlight them in just the right way,” Topčagić says.

Want to make a similar portrait yourself? “Choose wisely the part of the day that you photograph,” says Topčagić. “Go for the most beautiful light. Sunrise or sunset will almost always work. Take a model with you and experiment from a lot of angles.” For location portraits, she often has her subjects lie flat on a hillside and shoots down on them. The strategy allows her to spread out the red hair so it becomes a more important element in the photo. If properly oriented, the hillside can also block direct sunlight, allowing you to shoot on sunny as well as overcast days.

It popped the subject’s eyes, accenting the blue tones. Of her exposure, she says, “I always choose the aperture first, and then decide on the shutter speed and ISO. Once I have my aperture, with the light of the reflector in place I adjust first the shutter speed and then ISO.” She sets the slowest shutter speed that will assure a sharp subject and the lowest possible ISO. Of her passion for freckles Topčagić says, “They were once considered unsightly, but today freckles are making a comeback.”