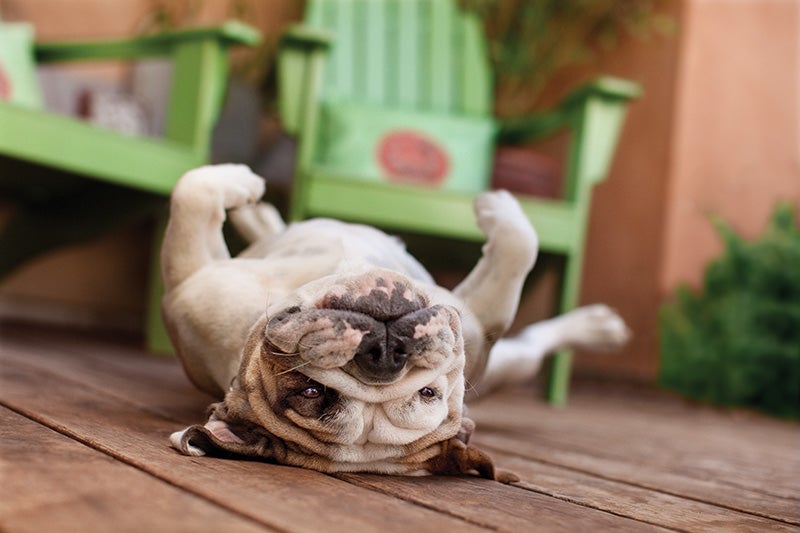 For Gary Parker, few things are more enjoyable than photographing man’s best friend. “I’ll shoot any pup I hear about—entirely for fun,” says this advertising, editorial, and, yes, pet photographer from San Jose, California . “For the basset puppies you see here, I drove over 100 miles to meet them, and it was a blast.” Creating great pooch portraits, he says, is the same process as taking great people portraits: “They should nail the character, personality, athleticism, and pure beauty of the subject.” 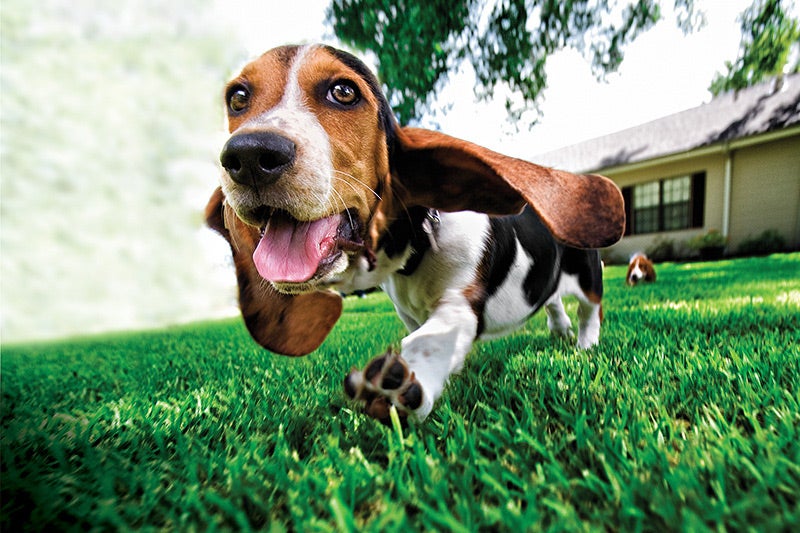 His typical canine portrait session can begin with a traditional set-up. Here, Parker might attempt to produce a specific look requested by a pet’s owner. To nail these, he says, it’s important to start with a relaxed animal. He recommends easing into the shoot to keep the pups calm and happy. Work slowly, move slowly, and be relaxed yourself. Be relatively quiet, and don’t force yourself on the pet. “Eventually the dog will lead you to cool photos,” says Parker. “As with babies and small kids, it can take some time.”

“I see dogs as outdoor creatures and that’s where I like to shoot them,” says Parker. He says the best outdoor locations offer bright, natural light with ample areas of open shade. A great setting will put generous swaths of uncluttered space between you and the dog and between the dog and the background. It will also allow for long, flattering portrait lenses (say, a fast-focusing 70–200mm f/2.8) and defocused backgrounds. To keep your canine calm, avoid distractions such as people or other dogs.

Parker prefers naturally occurring shade or that cast by a large overhead silk or scrim. If he has to shoot in direct sunlight, Parker will work only early or late in the day, making sure that his subject is backlit. He fills in the backlight’s shadows with reflectors or a flash. “Bounce a speedlight off reflectors or white walls, but never aim it directly at a subject,” Parker advises.

During the more traditional portrait segment of the shoot, he suggests having a wide variety of your dog’s favorite treats on hand. Most breeds are food driven, and most animal trainers use treats to direct their subjects’ attention and to reward and encourage desired behaviors.

To use treats effectively, Parker has an assistant tease the pet by concealing the treat in his or her hand, making sure the dog knows it’s there. The ploy usually provokes the desired expressions. For group portraits of a pet and its owners, these expressions can suggest important interaction, even affection, between human and animal.

Once he’s nailed a portrait that meets the owner’s needs, Parker gets active. Capturing dogs in motion requires all the skills of a sports photographer.

The best of these pictures capture real moments that he could never have imagined or staged. To start, he might ask owners to simply play with their dogs. “Sometimes I play with the pet myself while making pictures, typically with a wide-angle lens. I’m like a big kid shooting, running and jumping with the animal. The results are images with energy,” Parker says.

“Since I often find myself on the ground, rolling with the pet, assistants are essential,” the photographer says. “They aim reflectors, change batteries in a flash, or toss me lenses. My focal length needs can change on a dime, and it makes a huge difference having someone there to quickly swap out my lenses.”

On set with animals and their owners, an assistant plays a crucial role beyond the technical. “They make you look professional and can instill trust in a pet’s owner,” Parker says. “In the heat of the portrait session, assistants organize gear, chase after a mutt on the run, and provide distractions that can catch or redirect Fido’s attention. I’ve even asked assistants to run poop patrol!” he says.

As for composing an image, as most of the photos here show, Parker likes to get his camera low and shoot into his subject’s eyes. “I love unusual angles so I’m constantly flat on my back or stomach or in other odd positions that tend to require a chiropractor afterwards,” he jokes.

“When getting down to the dog’s level, I move slowly, making minimal eye contact, especially if the dog is hyper. Eye contact can cause some breeds to tense up. It’s important to come off as nonthreatening. Stand back, blend in, and let the dog rule,” he says.

Shooting subjects who move quickly and unpredictably naturally requires proper gear. Parker advises using a high framing rate, generous burst capacity, and effective noise control at high ISOs. “I like the Canon EOS 5D Mark III better than my Canon EOS-1D Mark IV because the 5D is lighter. Often, though, I end up using the 1D Mark IV for its 10 fps framing rate,” he says.

His favorite lenses vary with the setting and the look a client wants to achieve from the shoot. Generally, he relies on fast zooms like the Canon 16–35mm f/2.8L for in-close work and Canon’s 70–200mm f/2.8L for longer shots of shy or distant dogs. “I love the Canon 300mm f/4L since it’s lightweight for its size, plus it creates beautifully unsharp backgrounds. I often use the Canon 1.4X teleconverter with the 70–200mm and 300mm for an added layer of compression,” he says.

He’s also a huge fan of the Canon 50mm f/1.2L. “It allows indoor existing light photography in outrageously dark locations, catches focus in low light, and creates a beautiful look when used anywhere near f/1.2. At wide open, the lens is so fast, I can shoot using studio strobes’ modeling lights as my sole source,” Parker says.

Other items he brings to a shoot include waterproof blankets and gardening kneepads that let him lie flat on the ground or work while kneeling. “Since my style is to spontaneously react to photo opportunities, I need the ability to fall to the ground for the right angle. If the ground is wet or muddy, plastic sheeting can be a godsend,” he says.

When shooting a dog in available light, one of Parker’s main concerns is depth of field. He wants it as shallow as possible and suggests shooting wide open or closing down one stop to hedge your focusing bets. Shooting near wide open also allows the faster shutter speeds needed to freeze a dog in motion.

When he’s shooting with strobes, Parker sets the camera to manual. But if he’s using his Canon 580EX Speedlite, he’ll set his DSLR to the Aperture Priority exposure mode, which balances the overall lighting to include ambient light. In this mode, the on-camera flash acts as a fill light.

Pooch-shooting isn’t just for dog owners; it can be a practical solution for newbies looking for a model. “If you have access to a dog, you’ve always got a mostly willing subject that can challenge your skills at composing, focusing, and exposing,” says Parker. Dogs can teach you about human portraiture and sports photography, too. The only cost to you? A few bits of bacon.

In unfamiliar conditions, any dog can become aggressive. To avoid being bitten (or damaging your gear), watch for warning signs, such as hackles going up, and be ready to recoil. To defuse a tense moment, walk slowly toward the subject and place your camera on the ground. Walk away and let the dog sniff the camera.

NOW TRY OUT THESE TIPS AND SUBMIT THE RESULTS TO OUR DOG PHOTO CHALLENGE!