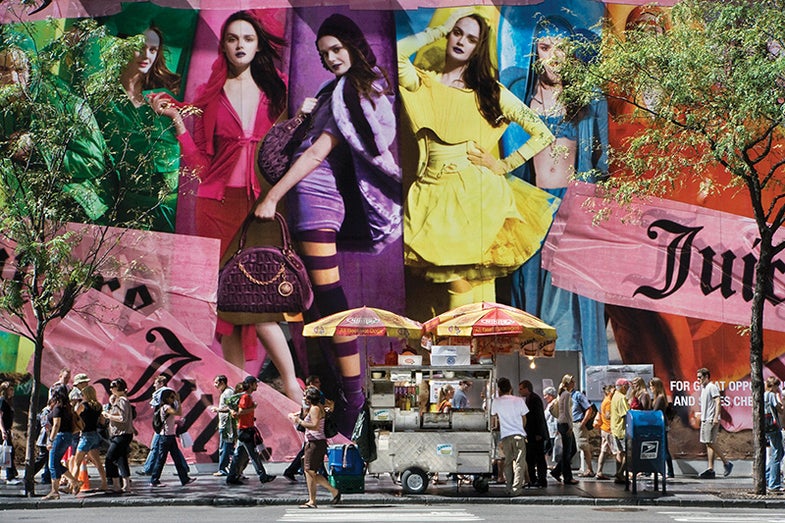 Natan Dvir, an Israeli fine-art photographer, has made a name for himself by adding new life to the genre known as street photography. Classic 20th-century street shooters such as Robert Frank, Leonard Freed, and Garry Winogrand generally worked in black-and-white and placed pedestrians front and center in their images. Dvir adds rich color and cinematic breadth to showcase passersby as actors on supersized stages. His best work is funny, sad, and insightful, all at the same time.

“It’s all about juxtapositions,” says the artist, who teaches street photography at New York’s International Center of Photography. The basic idea behind his series Coming Soon “is to juxtapose the artifical dream world that is created in billboards with the reality that plays out below them,” he says.

Why not try something like this yourself? Dvir says that finding street-level billboards is easy. Every major city has a premier shopping district that is home to luxury and high-profile retailers like Abercrombie and Fitch, Cartier, Juicy Couture, and Zara. Often to veil construction projects, these retailer will wallpaper their façades with billboards that can soar several stories high—a perfect backdrop for your own cinema-style street shooting.

Use the right gear.

Dvir considers getting the right lens paramount. “It should be sharp and a standard-range, moderate telephoto that will provide you with a little flexibility when it comes to focal length,” he says. Don’t go too long or short, as this will introduce unwanted linear distortion. You might get away with a monopod, but most luxury retail districts are too densely populated for tripods.

Choose advertisements that are entirely in shadow or in direct sunlight. Don’t shoot in contrasty, shadowed light or under mixed light at night. The billboards should be long horizontals that feature strong color, dynamic models, and plenty of graphic energy.

Shoot with your camera relatively parallel to the billboard to avoid keystoning. Dvir tries not to show a billboard’s outer edges, because it creates a unique feeling or atmosphere-—an all-encompassing place that draws the unknowing passersby into its surreal world.

Dvir can wait for over an hour until the graphics of the billboard are complemented by the energy on the street below. He prefers to shoot at ISOs under 400, but will go as high as 1000.

Fine-tune your images in software.

Dvir makes minor adjustments to color and sharpness in postproduction.