How To: Add Hero Lighting to Composite Photos

Lighting an athlete in the studio can be tricky 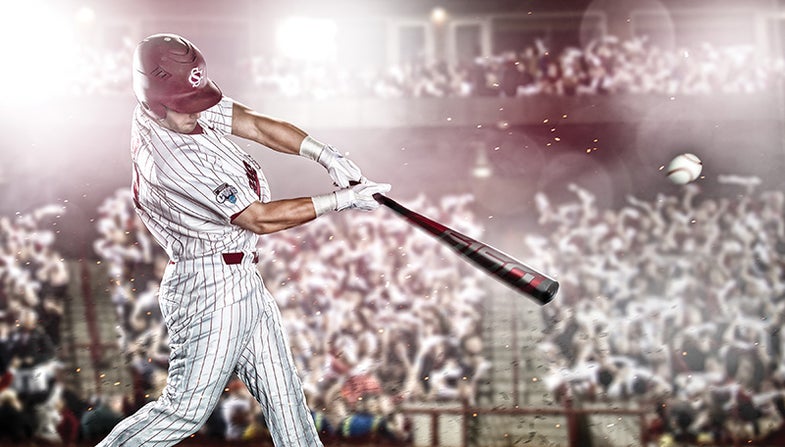 When creating studio portraits of student athletes for the University of South Carolina in his home town of Columbia, SC, pro shooter James Quantz Jr. tries to recreate the visual excitement of an actual game. He often does it by compositing in flashy backgrounds that pop the portrait subject. Dropping an athlete into such a background, however, makes his in-studio lighting all the more challenging.

Notice, for example, how the flaring stadium lights roughly mirror the placement of Quantz’s two background lights as illustrated in the diagram, above right. This was certainly not a coincidence.

A second lighting strategy for composites: rim lighting. By outlining his subject with light, Quantz made it easier to remove the batter from the dark black background during the compositing process.

Other critical qualities of what Quantz calls “hero lighting”:

• Lighting for muscle. By placing his lights to sidelight the batter’s arms, Quantz created highlights and shadows that emphasized the athlete’s strength. (He enhanced the effect by spraying his subject’s arms with water to add sheen to the muscles’ highlights.)

**• Rim lighting the subject. **In addition to its compositing advantages, rim lighting outlined the athlete’s figure, separating the batter from the background.

• Other details that speak to of the “hero” approach. Quantz used a low camera position, added sparks to the composited background, and blurred the bat and ball to suggest explosive motion.

James Quantz Jr. used Paul C. Buff Einstein strobes for this composited portrait of a University of South Carolina first baseman. Quantz likes the Einsteins for their very short flash durations (down to 1/13,000 sec), which are well-suited for freezing action. (Any blur in this picture was added in postproduction.) The harsh light bouncing off the batter’s helmet came from an undiffused Einstein (A); above the athlete, a gridded, softboxed strobe lit the top of the helmet and arms (B); while a Paul C. Buff beauty dish (C) lit the bat and back leg. Together the three lights formed what Quantz calls “hero lighting.” A fill light cast by a Paul C. Buff Octabank (D) illuminated the front of the batter, while a black flag (E) kept the backlight from striking the lens. Off camera, an assistant (F) tossed balls at the batter, while Quantz (G) examined the resulting pictures on a tethered laptop. Quantz added the background crowd later in postproduction. Illustration: Kris Holland/Mafic Studios