Behind the Shot: Lighting a Car Through a Frozen Lake 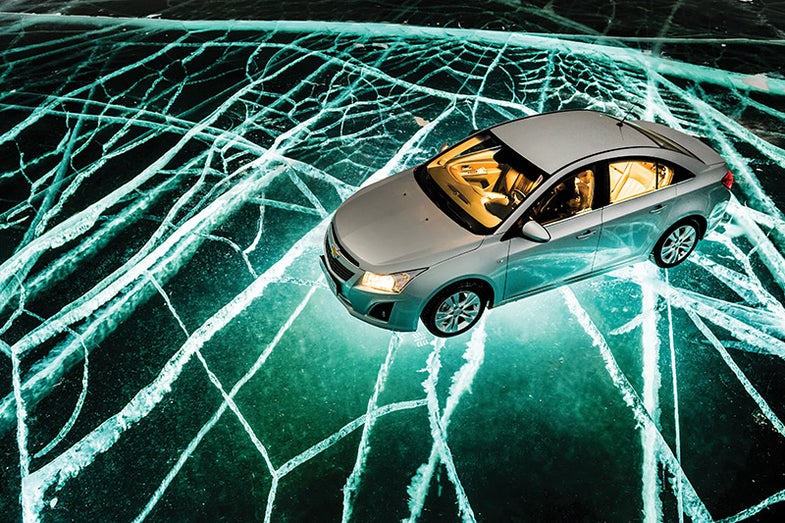 When Detroit hires the top-tier car photographers to produce promo shots for its Mustangs and Malibus, lighting budgets can top $100,000. Care to guess what it cost to light this awesome scene? About $300, and that included the services of two ice fishermen.

Pictured is a Chevy Cruze on Russia’s massive Lake Baikal in Siberia in mid-winter, and it was taken by Dmitry Chistoprudov and Nikolay Rykov, co-owners of a Moscow-based photo and video production company, Vostok. The car sits on meter-thick, fissured ice that, thanks to the lake’s clear water, resembles glass in its transparency. By drilling a hole through the surface—paging ice fishermen!—and submerging a diver’s flashlight below the car, the photographers could light the car from below. The aura-like glow around the vehicle and the illuminated fissures that streak through the surrounding ice like lightning bolts were created by moving the diver’s light during the 30 sec-exposure.

The take-away here? With a little creativity, magical lighting doesn’t have to break the bank.

Other unusual challenges of this shoot included:

• Smoothing the ice. The fishermens’ studded boots scratched the ice surface rendering it unusable as a background, but the photo-graphers were able to “erase” the marks by pouring water across the ice. With temps below –20 degrees F, it froze on contact, forming an unmarred surface.

• Clean the scene. From the hole drilled behind the auto-mobile, the fishermen excavated more than 220 pounds of ice that had to be removed from the scene by hand. (The team hadn’t thought to bring bags or shovels.) It took several people more than an hour to accomplish.

To light this scene, the photographers clamped a diver’s flashlight onto an inexpensive, folded tripod (A) and submerged it under the car through a hole in the lake’s surface. (They used a MagicShine MJ-801B light, but the Pelican Nemo, below, would work.) They then set up an extended-height tripod (B) (similar to the Gitzo below) for the camera (C). The photographer (D) controlled the camera wirelessly with a CamRanger trigger and an iPad (not shown). Two assistants (E) lit the car’s exterior with LED flashlights, while a third (F) moved the light below. The car’s interior was lit by the its own cabin lights. The team worked through the Siberian night in thick down coats, wearing headlamps. Illustration: Kris Holland/Mafic Studios