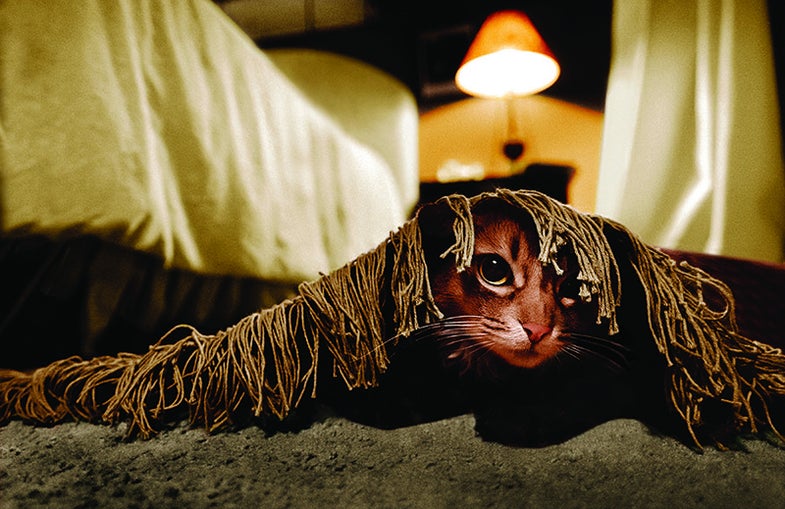 Max, a purebred Somali, posed in the San Jose home he shares with Gary Parker, who teaches at his own Swamp Dog­ Photography workshops. ** Photo: Gary Parker**.
SHARE

Trying to photograph cats is a lot like trying to herd them—great for laughs, but usually unproductive. To help you kick up the quality of your kitty captures, we got some advice from one of the best pet shooters in the country, Gary Parker of San Jose, CA.

•Use the right gear. Parker sometimes uses a 50mm f/1.2 but more often a 70–200mm f/2.8. The latter will nail a moving cat from across the room in good existing light. He also suggests a wide angle zoom (e.g., 16–35mm f/2.8) “so that when kitty is cool with you being up close, you can zoom in and out as needed.” Cameras with high burst rates are mandatory, at least 5 frames per second.

•Be prepared. “Cat photography is straight-out reactive photojournalism,” says Parker. To get that one cool photo of kitty, work just like a Sports Illustrated photographer capturing the key play that wins the game. “Being prepared includes never putting your camera away,” says Parker.

•Move slowly, speak softly. Avoid eye contact with a wary cat. Any time the cat looks at you, avert your eyes and remain motionless. Your goal is to assure the subject that you are no threat. “Never chase a cat for a photograph,” continues Parker. “If it bolts from the room, follow slowly while looking away.”

•Patience is key. You can’t make terrific cat photographs in a hurry. Be prepared to linger, perhaps for hours, waiting for Kitty to decide on her own to come out from under the bed.

An assistant can help you quickly swap out cameras or lenses as shooting conditions change. He or she can also track the cat (or the backgrounds) with lighting gear.

To get your subject’s attention, try using buzzers, clickers, or squeaky toys. Parker (or his assistant) will quickly toss a wad of paper into the air to entice the cat to lift its gaze and prick up its ears. The photographer avoids “peacock feathers and other clichés.”

If the cat will be attracted to snacks or treats, withholding a meal on the day before the photo shoot can help assure a more attentive subject.

They should be clean and well lit, just like backgrounds for human subjects. “In many cases, I walk circles around the cat trying to locate something attactive for the background,” says the Parker. Photographing cats where they shouldn’t be (like under a rug!) can work, but a simple black backdrop can show off feline beauty, too.

“For this image, I placed my camera directly on the carpeted floor,” says Parker, “and composed the photograph while laying flat in front of Max. For stability, I pressed the camera into the floor as I shot.” The technique earned him this sharp photograph, even though the exposure was a rather long 1/4 sec, at f/2.8 and ISO 200.