David Shale captured thousands of deep sea creatures, and here's how he does it 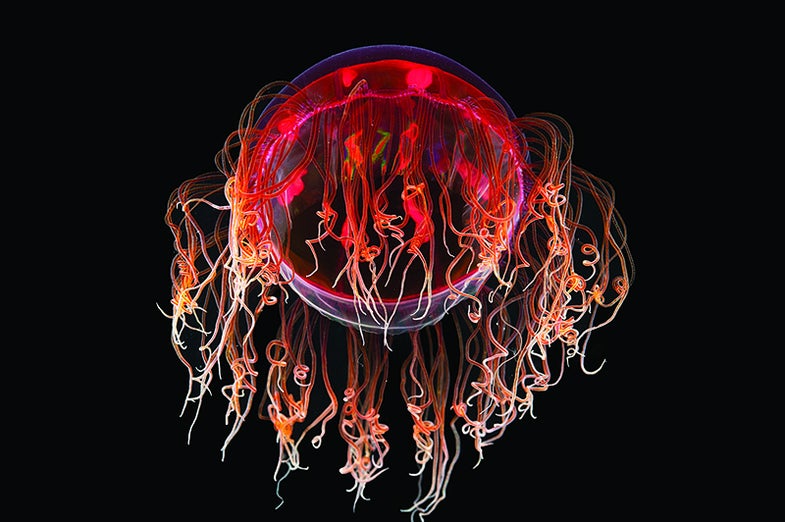 Photo: David Shale The ROV brought this tentacled jellyfish up from 2,700 meters from the North Atlantic Ridge.
SHARE 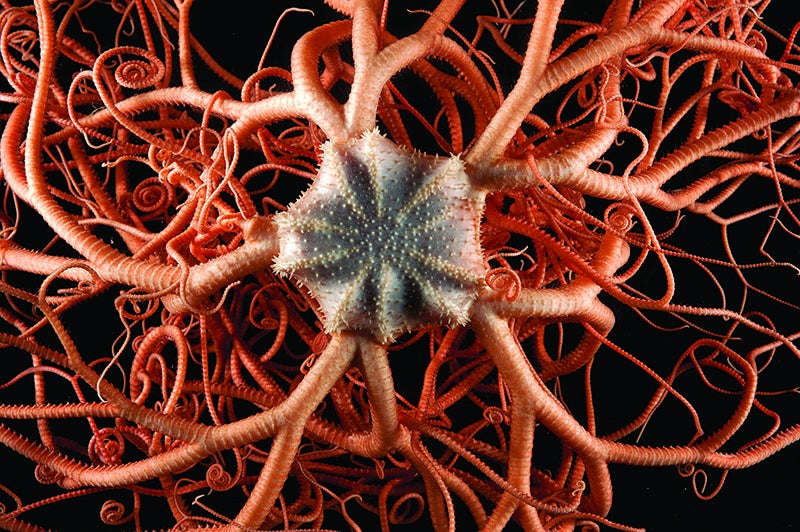 Photo: David Shale A type of brittle star, a class closely related to starfish, it was plucked from a coral seamount by ROV from at least 500 meters deep.

Imagine alien beings that live in a world with no light and little oxygen, in freezing temperatures, under pressure that would crush an earth animal, sometimes near volcanic vents spewing what we might well call brimstone. How would such deep sea creatures survive?

You don’t need to travel to a planet in the outer reaches of the galaxy to find such beings. They are right here, in earth’s inner space—the extreme depths of the oceans.

David Shale has been filming and photographing these deep sea creatures for nearly four decades, for both scientific research as well as TV nature programs. His experiences give him a long perspective on the advances in photography and exploration of this strange undersea world.

Shale, who holds a doctoral degree in marine biology, began photographing deep-sea animals in the 1970s for the U.K.-based Institute of Oceanographic Sciences (now the National Oceanography Centre). He left to become a wildlife filmmaker, but the two paths merged in the 1990s when The Blue Planet, the BBC oceanography series, took him on as a cinematographer. (He won a BAFTA award, the U.K. equivalent of the Oscar, for cinematography in 2002.) He then joined the Census of Marine Life project as photographer and videographer; the images seen here are from these expeditions.

While Shale has been down in a deep-sea submersible, virtually all his photography is done on the surface. In earlier days, benthic (sea floor-dwelling) animals would be brought up to the ship by nets. “It was a nightmare,” he recalls. “You’d drag a trawl over the sea floor for three hours, then you had to sort through the material. Most of [the animals] have mucus on them, so everything sticks to it; it would look like blobs of mud. They generally came up dead, so you had to get to them as quickly as possible; the longer you left them, the more they would change.”

And this was in the film era. “Taking pictures of black or silver animals in a tank of water with a black background was tricky,” he says. “When you were at sea for a month, you had to wait until you returned before sending off rolls of film. Often there was disappointment, and you could not take those pictures again.”

If video does not load, re-load page.

Then, the remotely operated vehicle, or ROV, was introduced. “The ROV is connected to the ship by a long conducting cable,” he says. “This allows the operators in the ship’s control room to ‘fly’ the ROV over the sea floor, collecting all sorts of data. The skilled operators can select specific animals and bring them back to the ship in near perfect condition.”

The ROV is equipped with robotic claws and collection tanks—and generally brings the deep sea creatures back alive—so Shale tries as much as possible to photograph living specimens. (Nets are still sometimes employed for gathering mid-water animals.)

Digital photography has also made a huge difference. “With a good digital SLR and the other gear tethered to a laptop, I can be certain of my subject,” he says.

Once the samples are brought aboard, they are taken to a “cold room” (about 40 degrees) and placed in aquarium tanks of cold filtered seawater. For video footage of live, moving animals, they are placed in a circular tank called a kreisel. In either case, the background is black, and subjects are illuminated from two sides, for a sort of dark-field illumination. If you want to try this setup, follow the steps in the first of our “5 Super Photo Projects,” (May 2014.)

“Being in a cold room for many hours is demanding,” Shale tells us. “You need a good supply of warm clothes, and friendly helpers providing cups of coffee. Laptops, cameras, and batteries don’t like the cold. And don’t forget this is not a static environment: The ship moves and so does the water in the aquaria and the subjects. Having said that, modern research ships are more stable, with less vibration than they had in the past.”

Shale, who professes to be “a Nikon man—and always have been,” uses a D2X, a D700, and D800. (“The trouble is you collect them as new models emerge.”) He uses 105mm f/2.8 and 60mm f/2.8 Micro Nikkor lenses, and extension tubes when necessary. Lighting comes from two Nikon SB800 Speedlights. Focus, exposure, and flash are manual. “Autofocus does not work, and neither do autoflash settings for this sort of work,” he says. He shoots at 1/60 sec or faster, at f/11 to f/22, with the flashes set to around 1/64 power.

Shale may handhold the camera, particularly when photographing animals in the kreisel. To keep the animals from settling, jets circulate the water in the tank. The animals drift around to the top, then downwards to the center—the sweet spot of the lighting setup. And it’s easier to follow the drifting creatures with a handheld camera.

“The camera is attached to my trusty Apple MacBook Pro,” he relates. “Images are seen immediately in JPEG format using Nikon Camera Control Pro, and I can make minor adjustments to lighting.” Shale then makes exposures in RAW, and once back on land, edits them and saves to TIFFs.

“I use the best specimens and clean them first,” he says. “The water has to be clean and free from bubbles—even a stray bubble can cause problems. Doing it this way means at least 90 percent of my pictures require no editing. Metadata is added as soon as possible before the next sample .”

Shale says there is little danger working on modern exploration craft. “The main features that stand out are the fact you are working on a moving platform, and often you work in a dark room with glass tanks, seawater and electricity—the last two don’t go together well.

“I do not remember any scary moments at sea,” he continues. “For some people, the thought of going down in a submersible to 1,000 meters sitting inside a 1.5-meter diameter Perspex sphere might be scary. I thought it was one of the most exciting things I had done in my life!” 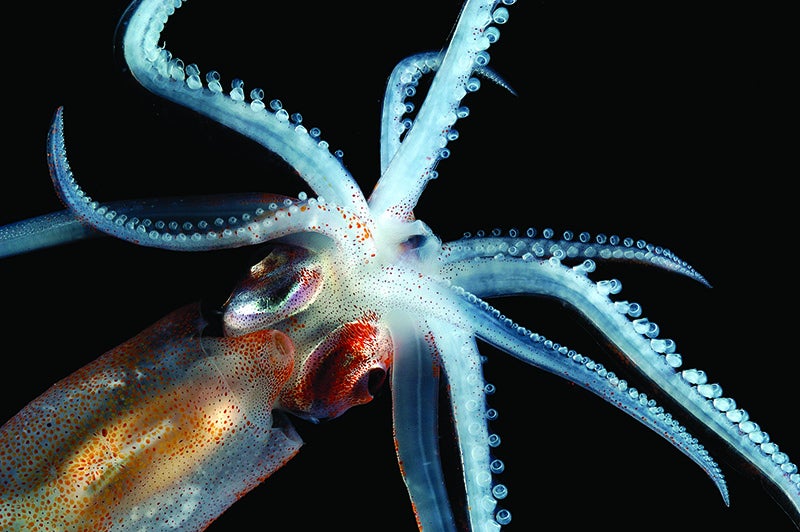 Photo: David Shale The specimen was brought in by a remotely operated vehicle (ROV) in the Gulf of Maine at a depth of a few hundred meters. Animals living closer to the surface tend to be more translucent than bottom dwellers. 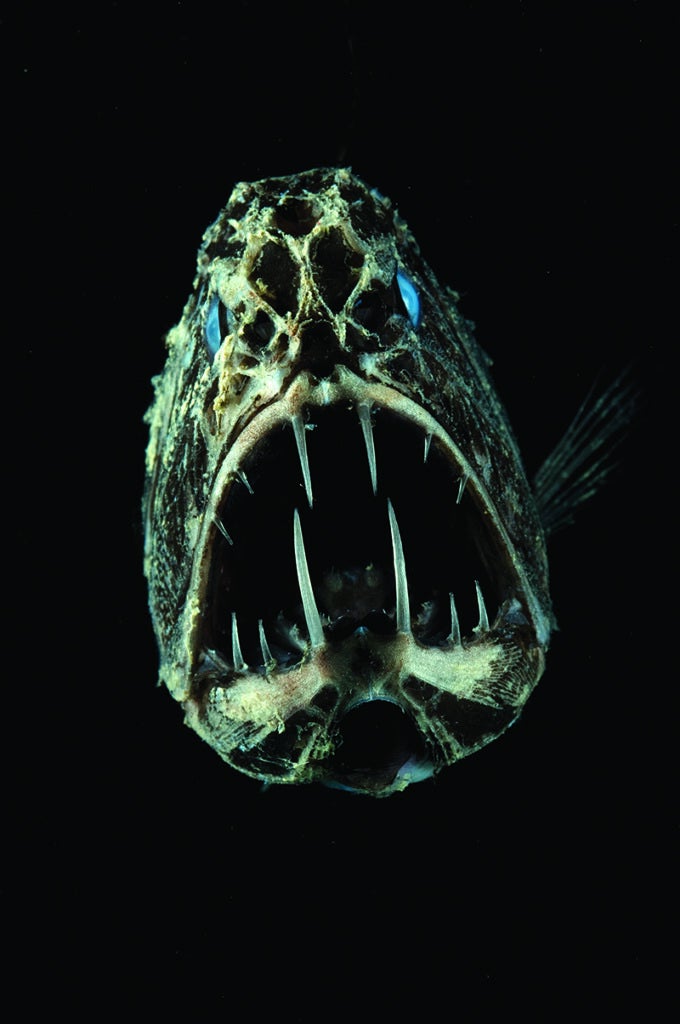 Photo: David Shale Captured by net in North Atlantic waters between 600 and 800 meters below, the fangtooth is one of the deepest-dwelling fish. 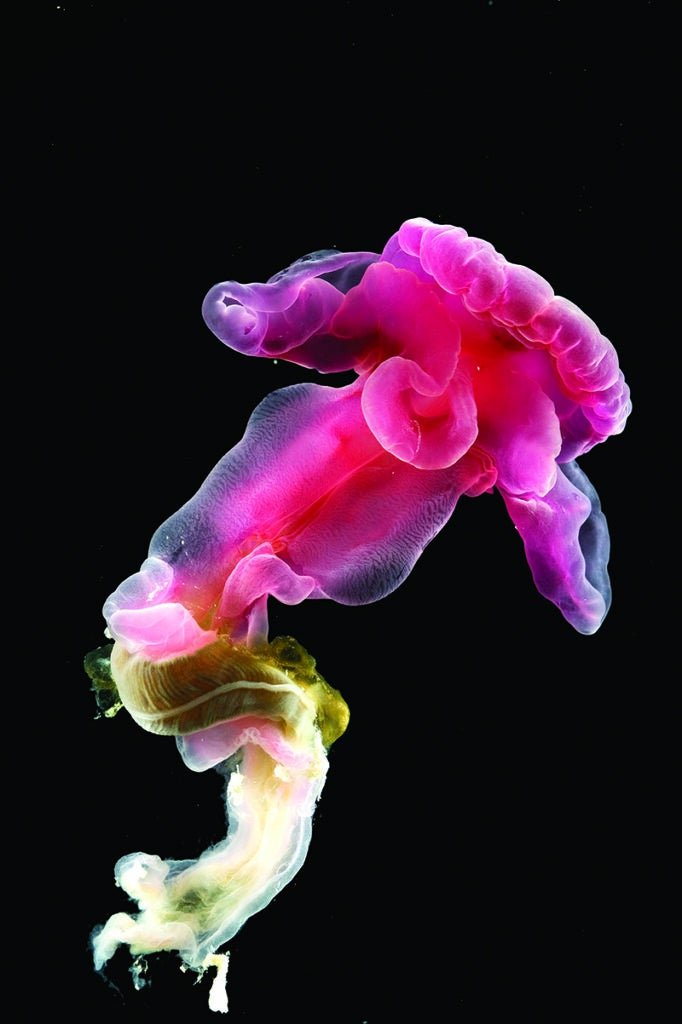 Photo: David Shale Brought in at 2,700 meters by ROV in the North Atlantic, these worms feed on sea-floor sediment and leave behind wavy traces. 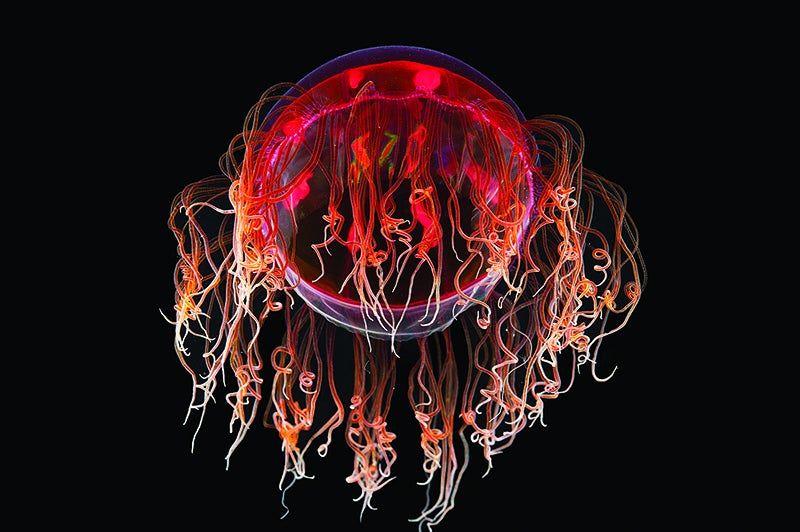 Photo: David Shale The ROV brought this tentacled jellyfish up from 2,700 meters from the North Atlantic Ridge. 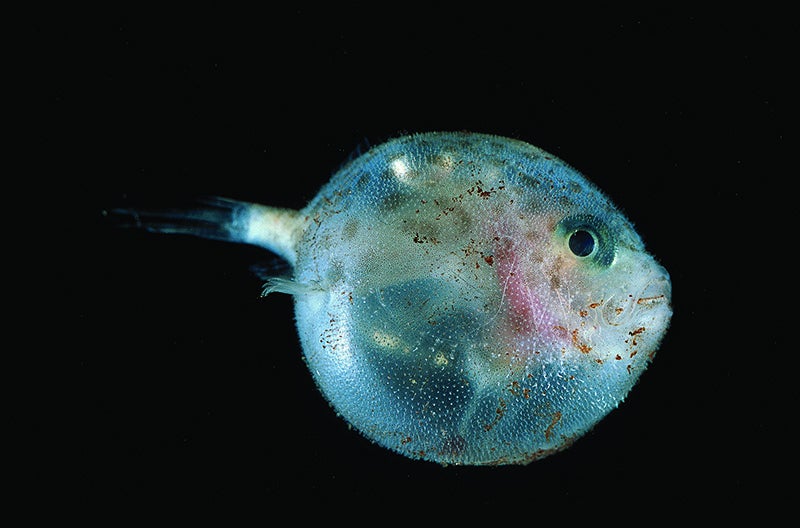 Photo: David Shale This specimen was netted at about 2,700 meters in the Gulf of Mexico. 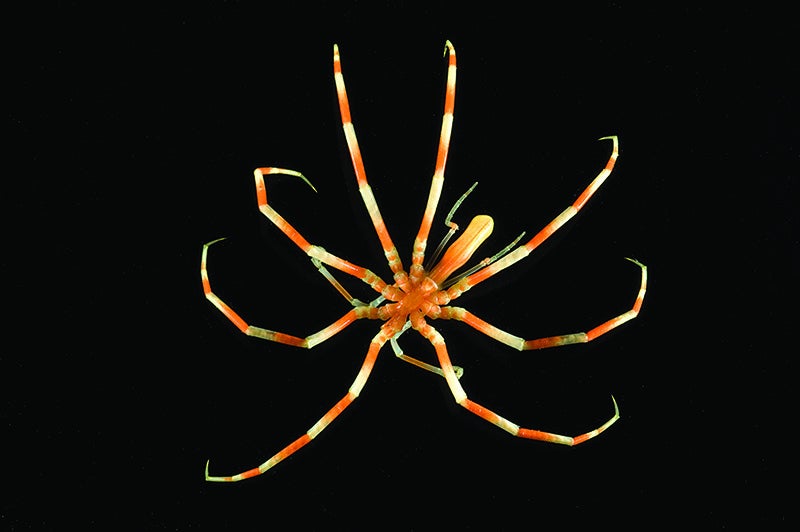 Photo: David Shale This benthic creature was caught at a depth of about 1,000 meters in the Barents Sea north of Europe.

Photo: David Shale A type of brittle star, a class closely related to starfish, it was plucked from a coral seamount by ROV from at least 500 meters deep.
Galleries
animals
Deep Sea
Nature Photography
Underwater Photography