How To: Backlighting Portfolio Subjects

Portland photographer Brian Fitzgerlad battled a dark venue and nasty illumination with some clever background lighting. The result? A daunting team of roller derby skaters that nearly pop off the screen. 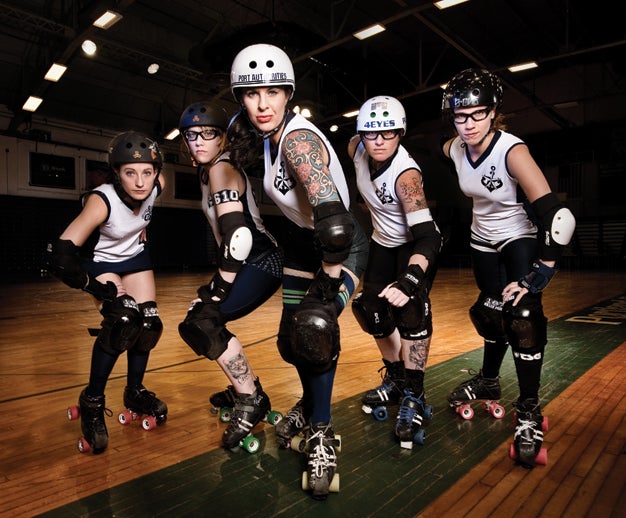 To showcase his considerable lighting skills, [Brian Fitzgerald](http://www.fitzgerald/ photo.com), a commercial, editorial, and portrait photographer from Portland, ME, produced this portfolio piece spotlighting the Maine Roller Derby League’s all-star team, known to fans far and wide as the Port Authorities. His main lighting challenge: popping his subjects cleanly off a cluttered, horribly lit background. “I was working in a very large space with only three lights,” says Fitzgerald. “It was very dark and the gym had nasty sodium-vapor lighting that I couldn’t turn off and would have to somehow minimize.”

His solution? He set a relatively small working aperture (f/13) that dimmed most of the background to pitch black. While this tamed the ghoulish sodium-vapor color temperature and background clutter, it also caused parts of his black-clad amazons to fade into the shadows beyond.

To bring them back, he cleverly aimed a backlight onto the gym flooring behind his subjects in order to better define their figures.

To accent the skaters even more, he added a second backlight that subtly etched the edges of their figures. Often photographers do this with plain white light, but for additional contrast, Fitzgerald gelled this backlight a cool blue. It subtly popped his subjects even more off the warm-toned flooring.

Other strategies Fitzgerald suggests for this type of scene:

•Preset your lighting. “Before your subjects arrive, set up and test your lights using stand-ins. You can’t fiddle with lights when subjects are standing there expecting direction,” he says.

•Use small apertures. This will not only dim a cluttered background, but the deeper depth of field it provides will let you stagger the players without worrying about anyone falling out of focus.

For this daunting team of roller derby skaters, Brian Fitzgerald chose Paul C. Buff strobes for their road-ready reliability. His main light (A) was a White Lightning Ultra Zap 1600 monolight bounced into a 60-inch Photoflex convertible (diffused) umbrella ** (B)** . “It was soft—large enough to light the whole group—yet directional enough to leave some dramatic shadows,” he says. Fitzgerald lit his background (i.e., the floor) with an unmodified Ultra Zap 1660 ** (C)** inside a 7-inch reflector. This pool of light separated the team from the all-black background and added a much-needed splash of color. Last, Fitzgerald set up a White Lightning X800 monolight ** (D)** with grid spot to serve as a subtle rim light, gelling it a cool blue for contrast against the warm-toned flooring. “Members of this team were in Shanghai last year, where they visited a roller-derby-themed bar and found this photo [sans permission] filling an entire wall!” says Fitzgerald.