Please don't let a hashtag tell you what to photograph 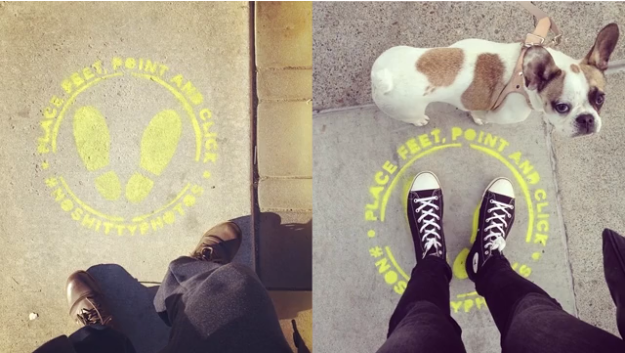 I like to think that the main objective of this site is to help people take better photos. The how-to stuff is obvious, but even the reviews and the news are meant to improve people’s photography. After all, picking the right gear and staying inspired are important pieces of the puzzle. But, the last thing I ever want is to support the rampant elitism that often turns people off from photography all together, especially on the web.

A recent project called the, sigh, #noshittyphotos project was put together by a pair of recent graduates who traveled to NYC and San Francisco, scoping out popular landmarks and deciding the “best” angle from which they should be photographed. They then spray painted a stencil onto the ground where people should stand if they want to take a photo that isn’t, well, shitty, I guess.

First, it’s not necessarily helping people take the “best” photo. It’s helping everyone take the same exact photo. You could just put a stack of post cards on the spot with the photo already taken and just be done with the whole thing. In fact, many theme parks and zoos have done this exact same thing with their “photo op spots,” only they did it without the attitude.

Second, the name is enough to drive me up the wall. I understand that recent advertising school grads are going to aim for something that’s grabby and hip, but it’s inherently negative from the start, and to me, that’s never good for creativity of any kind, let alone photography.

I, for one, typically hate the word hipsters. I think it’s a meaningless word used to discard and discredit the opinions of a person simply because they like or believe something different. In this case, though, it seems entirely appropriate. To say, “here, you’re stupid, so we did this for you. You’re welcome,” is the quintessential hipster ethos.

We sometimes write about things you shouldn’t do with your camera, but the idea there is to help people identify ways of doing things that may work better in the long run. If we speak out against something, it’s in the hopes that you may grow as a photographer, not simply so your Instagram feed can look exactly like everyone else’s.

Ultimately, I’m all for people taking better pictures, but I also understand that people value photographs for different reasons. If you’re just a person with a camera, you likely don’t care if a photo is compositionally perfect. You simply want a reminder of where you were and what you were doing. Hiking out of your way to find some stenciled footprints takes ever bit of spontaneity and creativity out of the equation. You’ve gone from having a technically lacking photo that accurately represents a memory you were trying to capture, to a run-of-the-mill stock photo dictated to you by a hashtag.

Take whatever photo you want to take. Share it with the people you think may want to see it. If you want to get better, learn and practice. And if someone tries to tell you anything else, smile, take their picture, and leave them standing on some stenciled footprints next to the Brooklyn Bridge.

[Note: I realize that, like with anything on the internet] this may be some kind of hoax or parody, but a quick search shows that some people are actually supporting it. A surprising number, actually. And even if it is a hoax, the fact that something like this can be so believable is still a bit depressing and indicative of the way we’re used to interacting with one another online.]