The unique wildlife of Japan is heaven for nature photographers 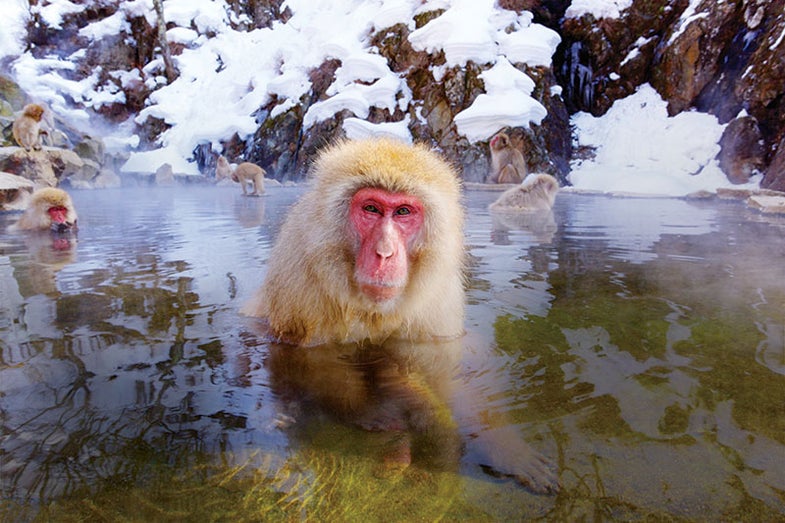 While snow monkeys may be the main event for visiting photographers, they are only one of the fascinating variety of species to be found in Japan. I saved these marvelous primates (technically, Japanese macaques) for the last shoot on my recent trip, and began this time on the northern island of Hokkaido.

Winter is the ideal time to photograph Japan’s wildlife. All of the bird species, including the iconic red-crowned cranes, eagles, and swans, migrate from Asia south to Japan during the winter and gather in a number of accessible locations. The snow monkeys come down from the hills and congregate around the hot springs during colder weather. Wildlife images can also be more dramatic with the stark beauty of fresh snow on the landscape.

This island nation has a population of about 125 million, so photographing Japan’s wildlife is not like visiting remote locations in Alaska or Antarctica, where you can have subjects all to yourself.

Most international airlines offer daily flights from major cities to Tokyo’s Narita international airport. Narita is more than an hour away by train from the city center, but there are many departures that will efficiently transport you to wherever you need to go. I took a train to Tokyo’s Haneda Airport; from there, I took a regional flight to Kushiro, a city on Hokkaido’s east coast. Finally, I rented a van and drove to the town of Tsurui to begin the tour.

Magical Cranes
This first stop would focus on the endangered red-crowned cranes that winter near Tsurui. There are several observation centers nearby; farmers feed them, so the cranes are easy to photograph. (Note that some centers charge a small fee for entry.) Groups of 50 to 100 cranes are not uncommon, and they will often approach quite near. I brought every possible piece of equipment, but found that I most often used my 500mm f/4 IS lens with teleconverters on my tripod, or my 70–200mm f/2.8 IS lens, handheld.

Red-Crowned Cranes, Tsurui:Using the same rig as above but on a tripod, Cornforth captured these cranes “dancing” on a fresh snowfall. Exposure 1/500 sec at f/5.6, ISO 320.

Typical photos here will be isolated cranes and full-frame portraits. But you’ll get more dramatic photos with the cranes in flight, so keep an eye out for takeoffs and landings. Watch for the cranes “dancing” during a fresh snowfall (and cross your fingers for wintry conditions). Other birds such as whooper swans, black kites, and white-tailed eagles are often encountered. No matter what the light is doing, shoot at at least 1/2000 sec to capture birds in flight.

Soaring Eagles
After a few days in Tsurui, I drove along meandering country roads to my next destination, Rausu. Each bend in the road revealed a beautiful landscape of snow-covered fields backed by forested, rolling hills. I even encountered a fox during one of my detours to search for owls along the fence lines.

Rausu, a quaint fishing village located on Hokkaido’s northeast coast, is the gateway to Shiretoko National Park. During the winter, pack ice from the Sea of Okhotsk drifts south and is often just offshore. Several boats depart the harbor well before sunrise to take adventurous visitors out to photograph the eagles.

I’ve spent a lot of time photographing bald eagles in Alaska, but it did not prepare me for the nonstop action of shooting white-tailed and Steller’s sea eagles. Once at the ice edge, the fisherman proceed to throw fish onto the ice, attracting an incredible number of birds. It is truly cold, especially when the wind is blowing, so make sure that you dress for warmth.

Try to find an open spot near the bow of the boat so that you can shoot eagles flying in from either side. If the sky is clear, find a good place to photograph silhouetted eagles perched on icebergs or flying across the rising sun.

The boat will probably be somewhat crowded, so forget about using a tripod (or even a monopod) for your big lens. I’m fit enough that I can handhold my 500mm lens for short stints, but it’s never easy. So consider using a 300mm f2.8 lens with a teleconverter on a smaller-sensor camera body to maximize your comparable focal length. (A 300mm lens with a 2x teleconverter on, say, a Canon APS-C body gives you an equivalent full-frame focal length of 960mm.) Either way, the best way to track a flying eagle is to handhold your camera. Use a wide-open aperture with a fast shutter speed, and vary your ISO based on the light level.

Swan Lake
After a week on Hokkaido, I set out for Lake Kussharo, about 35 miles inland of Rausu. This picturesque location is a volcanic caldera, with a large lake surrounded by the crater rim. During the winter, most of the lake will be frozen, except along the south shore, which is where whooper (pronounced “hooper”) swans congregate.

Expect to see more swans than you can imagine. Though I do not advocate feeding wildlife, many people buy popcorn inside the small restaurant and store to feed to the swans. (This will certainly bring them in close and keep them interested.) I did not need a big lens; a medium telephoto was perfect for photographing patterns in groups of swans. Break out a wide-angle lens to take advantage of the approachable wildlife and channel your inner landscape photographer; just remember that you will have moving subjects in your foreground.

Finally, Monkeys
After a week on Hokkaido, I flew south to Haneda airport to begin the final leg of my tour. After arriving in Tokyo, I departed for the several-hour train ride to Nagano, where I spent the night.The ultimate goal: spend the last few days at the Jigokudani Monkey Park.

Most visitors to Jigokudani stay in town and walk up the mile-long trail for a short visit. But I stayed at the Kourakukan guesthouse, only 5 minutes from the hot springs—and the monkeys. You can take a bus from Nagano to the trailhead, but better yet, hire a taxi to drop you off in the parking lot nearer to the guesthouse, especially if you have lots of camera gear and other baggage. Then get up early enough each morning to have the monkeys all to yourself for a few hours before the first tour groups arrive.

As I climbed the short hill and strolled into the park, the reality of being among a mass of adorable, squawking primates began to sink in. The ground and the hillsides in the narrow canyon were covered with monkeys, especially as I approached the main hot springs where they congregate.

Like all the other wildlife locations that I had visited during my Japan trip, the animals were fed several times each day. Since they don’t have any fear of humans, they will come very close. I left my 500mm lens behind and used mostly my 70–200mm and 300mm focal lengths. When I stood at the edge of the pools with monkeys only a foot away, I made ample use of my wide-angle zoom lens.

I was also hoping for some fresh snow during my visit, but instead was treated to warm and sunny spring-like conditions. If it had been colder, there would have been more monkeys in the hot springs. The unseasonably clear weather also made lighting conditions difficult. My solution was to photograph in the shade or wait for a cloud to pass overhead to reduce the extreme contrast range in the canyon.

Conversely, the steam coming off of the hot springs could also soften my photos to the point of ruining them, but with some careful composition, it could enhance images with an ethereal quality.

So stay flexible. Bring lots of memory cards to Jigokudani—and eat a big breakfast! You’ll want to stay all day to photograph, but eating in front of the monkeys is a no-go. Attempting a snack on an energy bar, I suddenly found a macaque with in arm’s reach, ready to pounce. I’ve never experienced a gaze that was so focused and menacing. At that moment, I decided that I should probably go hungry—and go back to shooting.

A Winter Wildlife Tour in Japan:Jon Cornforth began his photo trek capturing images of red-crowned cranes near the village of Tsurui (A). He motored to Rausu (B) to photograph sea eagles from a boat off the coast of Hokkaido. Then it was on to Lake Kussharo (C) to catch the action of the whooper swans. After a regional flight into Tokyo on the main island, he made a road trip to Nagano (D), for a noisy encounter with the snow monkeys in Jigokudani Monkey Park.