Tips from the Pros: Posing Subjects for Group Portrait Photography 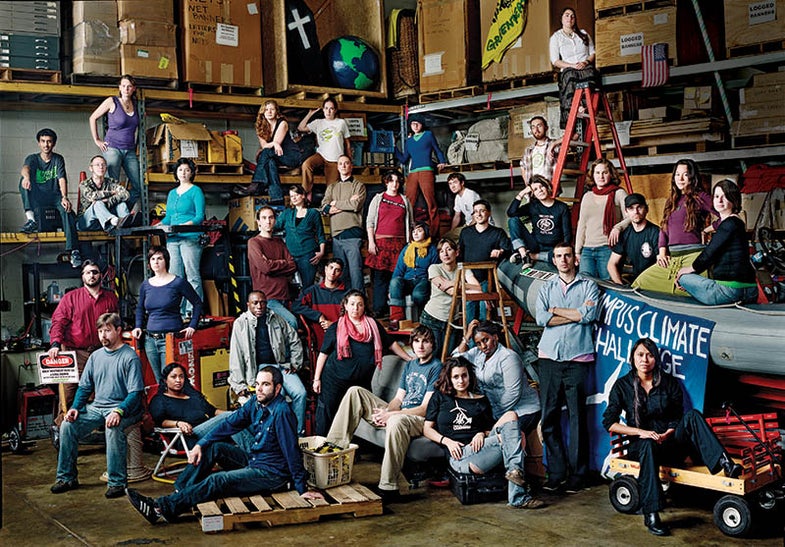 Big family portraits are hard. Clothing and calendars need coordinating, and an appealing, well-lit background needs finding. You’ve got to keep spirits high while you coordinate myriad other details so that everyone looks perfect for the split second that the shutter is open. The good news? Despite the seeming impossibility of it all, great family portraits are indeed possible, and we’ve gathered a panel of seasoned pros to explain how.

Your first task is to help your subjects look relaxed and unselfconscious. Art Streiber, the great L.A. celebrity portrait photographer and advertising pro who shot the opening photo explains, “Even though you may have 35 people in the shot, it should feel like they all just strolled in and stood there. To get the look, ask your subjects to stand or lean naturally and casually. Have them cross their arms, cross their legs, or rest a foot on a chair railing.”

Before family members take their places, observe their natural body language. Spencer Heyfron, the editorial shooter from Brooklyn, NY, who shot the fashion below, says: “It’s surprising how some people are completely at home in certain stances. Watch for those poses, and use them to your advantage.”

Spencer Heyfron posed office workers for a fashion story in Lucky. When Heyfron shot this fashion lineup he was careful not to duplicate the shoulder, head, leg, or foot placement of his five subjects. “Just a slight turn of the body can work wonders,” he says. Not only for the person who turns, but for subjects on both sides of her, too.

As you begin to place your subjects, vary the visual elements. Mix up clothing colors, genders, races, heights, ages, and poses. Avoid lining up heads, and don’t let two adjacent subjects both cross their arms, for example. Mix up shoulder alignment so that no two people are aimed alike. “Don’t be afraid to twist people toward and away from the group’s center,” says Streiber. Not all the people on the left side of the frame should be aimed toward the right, and vice versa.

Cat Thrasher took this intimate portrait of her parents using a Hasselblad 501 CM body and 80mm f/2.8 Carl Zeiss lens on Fujifilm Neopan Acros 100 film. “Having your subjects touch releases them from the obligation of formality during the shoot,” says Thrasher. “It signals that they can express their love and intimacy. Also, touching a loved one who is nervous or anxious helps that person relax.”

To get relaxed and casual poses, act and speak in a relaxed and casual way yourself. To do this may require some prep. Cat Thrasher, the Charlottesville, VA, pro whose parents you see above, says, “I find it helps to have a little repertoire of upbeat go-to phrases and go-to poses. I also collect tear-sheets of beautiful poses and show them to subjects. It relaxes them because they learn roughly what’s expected of them.”

Unless you’re posing a soccer team or rock band, avoid placing people in a straight line. Instead prop your set with sofas, high back chairs, and stools so that people can kneel, sit, and stand in ways that vary head heights for a nice rise-and-fall rhythm. “Give people something to put their hands on,” says Streiber. “Either the back of a chair or someone else’s shoulder.”

Peter Yang photographed these four Texans for a Texas Monthly magazine story on the dying breed of cowboys. Because they were essentially individuals and not part of a family or organized group, he posed each separately in his own space. “You could almost crop each guy out and have a nice portrait of him,” says Yang. “More often when I shoot groups, I try to highlight their connected qualities by having the bodies overlap, asking the subjects to touch if it’s appropriate, and making sure that the overall shape of the group has a cohesive feel. Not for these guys, though.”

To give your portrait some structure, compose the group using a geometric pattern. Two common solutions are “apex” and “grid” poses. Streiber’s group on the opening spread is posed on a grid, while Peter Yang’s cowboys, above, and Buff Strickland’s campers are posed with a subject forming the apex of a triangle. Yang, the famous editorial shooter from Brooklyn, NY, placed the shortest cowboy on the horse, to give him some extra presence.

Another posing strategy is to create a rhythm across your group. Dustin Snipes, the L.A. sports specialist who shot the football team, alternated standing and seated subjects. Yang created a rhythm by alternating blue and white shirts with his cowboys. Is your group large? Break it down. “Don’t try to pose 12 people simultaneously. You’ll go crazy,” says Streiber. “Break up the group into 3-, 4-, or 5-person subgroups.”

Dustin Snipes shot the Westlake Village High School football team for ESPN High School magazine. Three of the team’s players have famous dads. Shot with a Nikon D700. For his portrait of a suburban Los Angeles high school’s varsity football team, photographer Dustin Snipes wanted to keep things light. Instead of posing them classically (and seriously) on a gridiron, he took the team fishing. When you want to add humor to a group portrait, he says, use an unexpected or nontraditional location and a good prop. “In this case, it was the largest fish I could afford from a nearby grocery store,” he laughs.

When composing a family group that includes a diverse range of ages, pose the restless ones—i.e, the kids—as your last step. As Yang explains, “If you’re shooting six people, you can’t have six constantly changing variables. I start by locking in subjects who look good, and whom I sense can hold a pose. With the cowboys, I posed the outer two guys to serve as anchors, and then focused mainly on the horse, which was a wildcard.”

Children can often be similar wildcards. Get everyone else into position, and then focus on the kids. Keep talking and directing, and don’t let them get distracted or start to zone out. It also helps if you try to remember their names.

Prior to a shoot, Streiber asks his subjects to wear clothing in earth tones such as black, beige, or brown. He’ll also ask for jewel tones like burgundy, emerald, celadon, or teal. But no primary colors. “Primaries in a big group are lightning rods. Red, orange, yellow, green—your eyes go right there, and that’s not what group portraits are about.”

For this promotional still for a Chicago theatrical production, Saverio Truglia wanted his subjects to reflect a coherent camaraderie, which comes across in the shared gazes, similar body language and wardrobe. At the same time, though, their facial expressions suggest that they’re distinct individuals. “They’re all invested in their future. But they don’t all feel the same about it,” says Truglia. Truglia’s bicyclists is an example of apex——or triangular— posing.

Saverio Truglia, the Chicago pro who shot the bicyclists says, “I ask people to layer, because it can add visual interest, and give me more to work with.”

For his bike riders, Truglia used a background darker than his subjects. “It separated the subjects, popping them forward, while the subdued background created [an editorially appropriate] sense of gloom.”

Streiber likes posing his groups in corners, as he did for our opening photo. “The walls that converge into a corner, move forcefully through the frame, compelling you to look more deeply into the picture,” he says.

A geometric background can help you frame your subjects, as it did for Streiber’s opening shot. But you don’t want too many lines back there. “With groups, there’s already so much going on visually, that I like to keep backgrounds simple and not distracting,” says Buff Strickland, a lifestyle specialist from Austin, TX.

In many ways photographing kids in groups is easier than adults, says Buff Strickland. “They’re less self-aware than adults, and are willing to get cozy with other kids standing nearby.” What you don’t want to do is put them in locations or situations with which they’re unfamiliar. They will freeze up or freak out. Strickland’s campers are another example of apex——or triangular— posing.

Shooting on a tripod is essential if you want to be able to swap out faces digitally. “It’s often the case when shooting groups that someone will blink. I’ll regularly shoot on a tripod so that replacing heads is easier,” says Truglia.

Lens selection is also important. For Truglia’s portrait of the three bicyclists, he used a somewhat wide-angle lens to emphasize the main character’s central dominance.

In a portrait of equals, however, he warns that a wide-angle lens can elevate a close subject by exaggerating their size relative to more distant figures.

For large groups, you may be tempted to use a wide-angle lens to squeeze everyone in. Think twice, though. With subjects equally distant from the camera, wide angle lenses make outer subjects seem large relative to those placed in the center of the frame.

How to capture large groups without wide-angle distortion? Art Streiber suggests a “side-by-side” composite. When he’s scouting locations, he makes sure there’s room for the camera to be placed back from the group. Then he gets out a normal lens, poses the left side of the group, and makes a set of exposures. He then pivots the tripod-mounted camera to the right, poses the subjects on that side of the frame, and makes a set of exposures. Both sides are then composited, and the result is distortion-free. Our opening photo is a side-by-side and all its subjects appear equal, with an almost cinematic presence. Splitting the group into two also makes posing less daunting—and isn’t that an appealing thought for your holiday group portrait?