A chartered flight, a couple cameras, and a tiny window of opportunity 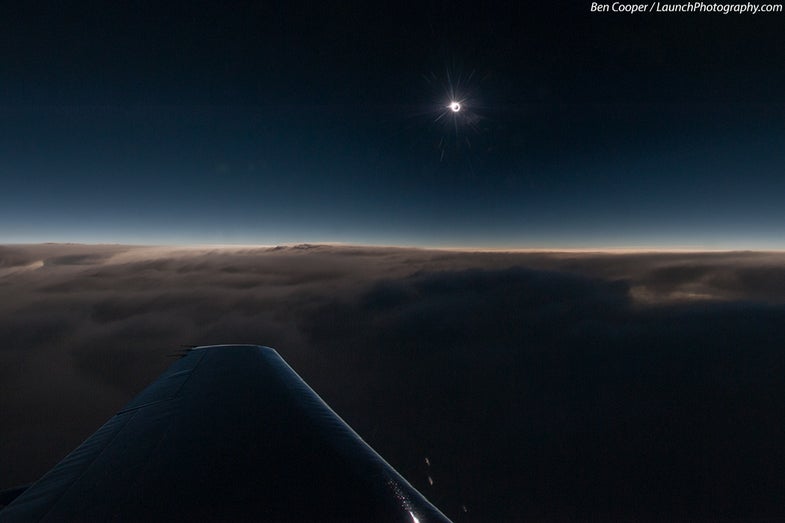 You’ve likely seen Ben Cooper‘s work before. In fact, we’ve featured it a few times here on PopPhoto.com. He’s known for his work with the space program, but he recently attempted to capture a difficult solar eclipse photo. The process required an intense planning, incredible precision, and a chartered plane. Here’s the story behind the shot.

On November 3rd, 2013, a total solar eclipse was visible along a narrow path stretching from the central Atlantic ocean (south of Bermuda) all the way across into central Africa. Total solar eclipses occur somewhere on earth an average of every 18 months.

People travel all over the globe to try and catch them. Some people even get hooked, traveling to as many as they can.

This year’s eclipse was much shorter than a typical event. It had a maximum of just 99 seconds. A typical eclipse lasts between two and seven minutes. It also occurred in a rather remote area over parts of Africa with less infrastructure, so many chasers decided to sit this one out. Several groups made it to Africa and some were on small ships in the Atlantic ocean.

I was planning to skip this one myself until early September, when I got word of a small group trying to charter a jet in Bermuda to do something never done before. Going up in an airplane to see an eclipse is nothing new, but the plane typically follows the path of the eclipse and waits for it to catch up. We took a perpendicular path, like two cars hitting an intersection at a high speed. It left no margin for error. We needed to be at the right spot at exactly the right time to get a few seconds of totality.

I planned a very hasty 24 hour trip, flying from Orlando to Bermuda (with stops in NY and Boston) Saturday and coming back Sunday. The eclipse was slated for 7:08:00 at the spot we chose (we chose a round number on purpose). We chose a takeoff time around 5:35am to give us about 30 extra minutes in case of headwinds or other factors. We wound up getting to the spot early and looped twice before setting up for the intercept. It took a ton of planning, but it worked out excellently.

Once we were airborne, we took some of the plane’s seats out so we had room to shoot. We had to do this fast, so one of the plane’s techs was on board to help and we practiced it the day before.

The actual flight was just under three hours. Once the seats were out we had about an hour to get all gear in place. In all the commotion, it didn’t even occur to me to take a photo of my setup, which I regret since it’s something I typically do.

I brought along my usual two-camera setup, one wide and one tight. With my wide angle on a D700 and ISO 200 f8 I intended to capture the airplane’s wing and sky below, with the eclipse. I was successful with this, and this is the shot I wanted the most. I am always a fan of wide angles that truly capture the experience. I set it up at one window and used the intervelometer timer to have it begin firing 15 seconds before the total phase and keep going. I bracketed seven stops continuously.

The other camera, which I was manning, had a 400mm on my D300s for effective 600mm, which I have used for my other total’s as well. Again, I bracketed seven stops in high speed hoping to capture different exposures for the “beads” and “diamond ring” effect (when there is still a dot of sunlight peeking out) as well as a greater exposure in case we hit complete tonality. The diamond ring requires about 1/2000 even 1/4000 second (ISO 200 f8), as even the tiniest pin-prick of sun is blindingly bright. For added stability, I clamped the 400mm down with a Superclamp but kept the ballhead free since the plane was moving.

We wound up hitting some turbulence at the last moment and the images may have suffered a bit. There were a few obstacles to overcome, though, all of which needed to be accounted for. First, there are the airplane windows through which we had to shoot. It’s also extremely tough to pre-focus for an event like this and you have very little time to adjust.

Ultimately, I am slightly disappointed I did not get the clearest shot of totality/diamond ring up close this time, but thrilled that the wide angle turned out. It was not an easy shoot, but the experience will likely be invaluable during the next eclipse, which occurs in March, 2015. That one, however, will be nearly four minutes long and will provide more time to adjust and check the photos quickly for focus.

Special thanks to good friend, photographer and eclipse chaser Don Hladiuk for helping ensure these two sets of photos turned out. While doing video, he also stood by at the window with the wide angle, helping stabilize it and prepared to take over the camera if it did not fire on time.