You Can Do It: Portrait Photography On Location With Softboxes 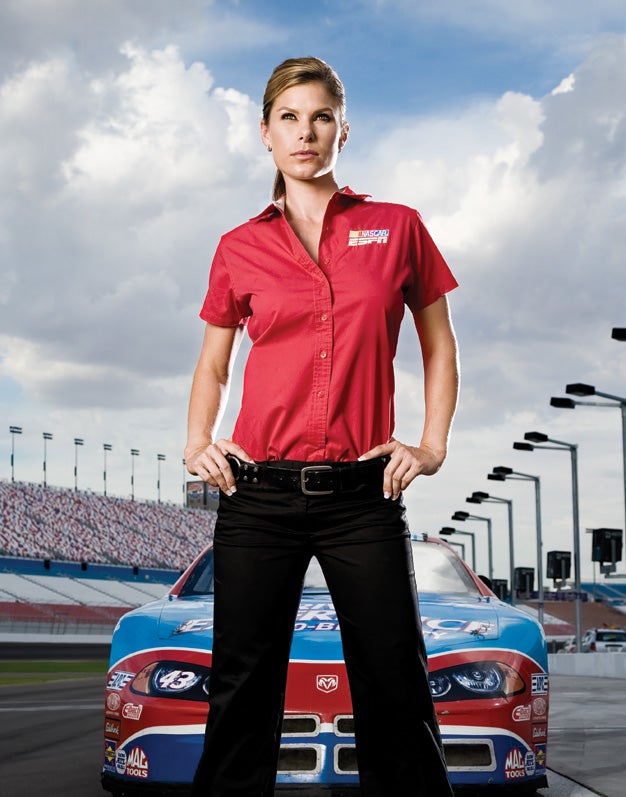 Newcomers to advanced lighting can be confounded by the way pros often describe strobe power settings. For instance, Ian Spanier, the New York-based portrait, advertising, and editorial photographer who shot this eye-catching portrait, says he set “the key light to f/10, the highlight to f/11, and the fill to f/5.6.”

Hmm. The outputs on his lighting gear aren’t calibrated in apertures, nor did he set any of these three apertures on his lens. And why is he talking about f-stops when strobe output is rated in watt-seconds?

Answer: He’s using a form of shorthand for communicating lighting ratios that’s based on readings from a handheld flash meter. This is necessary for building multi-light setups like the classic three-point lighting scenario that he used here.

Spanier started this portrait of Jamie Little, ESPN’s NASCAR reporter, by deciding on a base exposure for the dramatic sky. After averaging a few spot meter readings at ISO 100, he landed on 1/160 sec at f/10.

Before setting up his front lights, Spanier went to work on the accent or rim light that strafes Little’s arms and jawline—he likes to set up his lighting from back to front because “it lets me start with a foundation and build on it.”

For that accent he positioned the backlight out of view of the camera and then determined its output. He wanted bright highlights, and knew that flash output would have to meter 1/3-stop brighter than the background; 1/3-stop over f/10 is f/11. (The higher the flash reading’s aperture, the brighter the strobe output.) He held his flash meter beside Little, and aimed its dome back toward the backlight, while an assistant adjusted the strobe output until the flash meter read f/11.

Next, he placed the main (or key) light and powered it to an exposure of f/10, equal to the background. In order to pop the subject off the background and fill in shadow detail, he decided at this point to set f/8 as his actual working aperture.

Finally, his front fill needed to be considerably dimmer to throw just a touch of light into the shadows, enough for a meter reading of f/5.6.

Kris Holland/Mafic Studios
For his portrait of ESPN reporter Jamie Little at the Las Vegas Motor Speedway for Muscle & Fitness HERS magazine, Ian Spanier used a classic three-point light setup: back, main and fill lights. His backlight—used to separate and define Little’s figure from slightly darker background—was a Profoto Grid reflector and Pro 7 strobe head (A) powered by a Profoto 7B power pack ** (B)** , which he hung from the light stand as ballast to prevent the light from toppling over on an unusually windy afternoon. The grid added a focused hardness and brightness to the light rimming her figure. In contrast to this hard light was the softer main light. For this, Spanier used the same Profoto configuration as for the backlight, except the grid reflector was replaced by a much more diffuse Photoflex Medium OctoDome** (C)** with two baffles that evened out the light. Finally, the fill light (the same Profoto pack and head) was also softened—this time by a Photoflex Large Softbox (D).

How to
lighting
Portraits
Shooting