Tips From a Pro: George Lange on Effortless Portrait Photography

Pro shooter George Lange shares his tricks of the trade 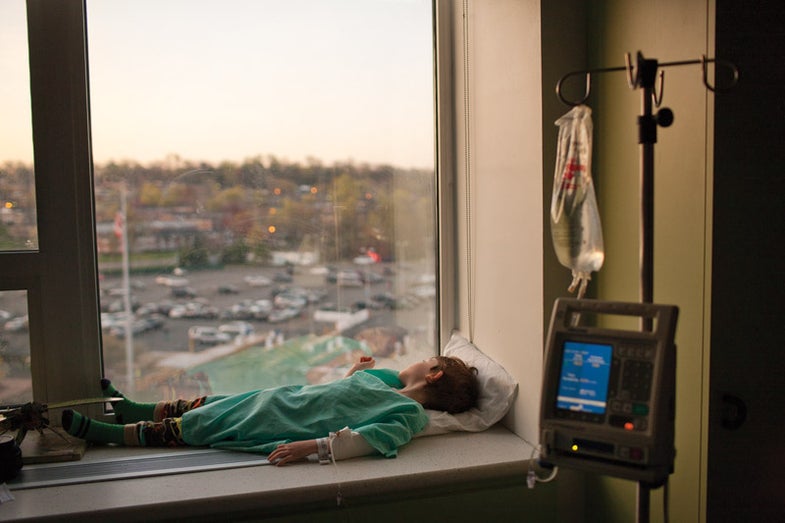 Says Lange, of this photo of his son, awed by the beauty of the sunrise from his hospital room: “This is one of those places you rarely bring your camera— who wants to remember? Yet we were together and it was a moment full of more wonder than sadness.”. Photo by: George Lange
SHARE

Seasoned pro George Lange has photographed everything from the cast of Seinfeld to the births of his sons with a lighthearted touch that makes his thoughtful and emotional pictures appear completely spontaneous. We talked to him to find out how he does it and got his tips so you can try it yourself.

How did you get started shooting?
I was born in Pittsburgh in 1955. I started taking pictures from when I was about seven years old and I’ve taken pictures every day since. I went to the Rhode Island School of Design, graduated from there, moved to New York and worked with Duane Michaels and worked with Annie Liebowitz for a year; the last six months she was at Rolling Stone and first six at Vanity Fair. I did everything for her—I was the main assistant. I traveled all over the world with her. Annie was 1,000% invested in the work that she did. It was powerful to be around and inspiring. After Annie, I decided I would never assist again, and I left to start my own career.

How do you make the portraits seem so natural?
I totally clear my mind. I try to have very little in my head and not think about how the final thing is going to look—I love the process of discovering something special while I’m shooting. Most of the time I just want to let it steer toward something that I never even thought of. I don’t want to restrict the possibilities of the picture by planning too much ahead.

What do you shoot with?
I’m really into this Canon EOS-1D X that I got a year ago. It’s basically a high-end sports camera, but I don’t use it that way. It gives me a couple of extra f-stops, and I’ve gone from shooting 1,000 pics a day to 3- and 4,000 pictures a day. It’s changing the way I see—you can shoot the arc up to the hero shot and the arc down from the hero shot. I’m getting pictures that I’d never seen before, and I’m shooting lots of pictures of my kids moving at 1/1000 sec that I could never have gotten years ago. And there’s no “not enough light” anymore, which is also very liberating. Now even a match is more light than you need.

Do you have a favorite lens?
I mostly use the 24–70mm f/2.8L; I rarely use a lens longer than a 50. I like to be able to touch subjects when I’m photographing them. I don’t like being much further than arm’s length. So between 35mm and 50mm I take most of my pictures.

How does that distance affect the way you photograph?
I don’t want to be screaming across the room at my subject, but I don’t want to be uncomfortably close either—my shooting distance is about the same as having dinner with someone. And I never crop a picture in post. I make it in the camera intuitively, and it’s rare that I will look later and say I should have moved closer.

How do you set your camera?
I am really like a child—I like taking pictures like I’m still seven years old so I could care less about the settings. If it’s a little dark the ISO is generally between 1200 and 1600. I make super-fast decisions: I’ll just take an exposure and look at it on the screen and then adjust off that. Lots of times I won’t even get it right, but it doesn’t matter because you’re shooting RAW and you have so much leeway. In the end, I don’t even care that much if I don’t get the picture. I still had the experience. It’s about that process of seeing and wanting to remember.

How do you edit when you take 3,000 exposures a day?
It’s a nightmare, especially when you are also personally invested in all the pictures! I’m turning in sequences to clients that work as animated GIFs or stop-motion HTML videos. For the most part, my work—and most people’s these days—is seen on the computer screen, unless it’s on my mother’s wall in Pittsburgh. You’re editing for media that people are not spending that much time with, so I try to work as fast as I can.

How do you get that great natural light?
You have to know the light in your house. Not if you’re living in a basement in Brooklyn, maybe—but so many people live out in the country, and there’s all sorts of light that does special things. We are having these incredible dusks out in Colorado, and every evening we go out and take pictures in that light for 10 minutes. In my house, when there’s a light on in the bathroom and it rakes across the bed, the light is ridiculous! It’s not like I’m some genius that I’m taking these pictures—it’s just that I’m aware that there’s good light and I use it.

You photograph your family a lot. How do you balance between photographing and being present?
My wife is super nice about it. My wife and I are both artists—my job is to mine that part of my life and explore that part of my life, and she does that, too. So there is a certain understanding and a real trust between us. Still, every time I pick up my camera it’s like: Do I want to photograph this or do I want to experience this? You have to photograph very quickly—the time that the camera is in front of my face is measured in seconds. It’s a very quick thing that’s happening, and then it’s gone. The way I’ve taught my kids and taught myself is that, when I’m photographing, we are for a moment appreciating how special what’s going on is. It doesn’t feel like it’s detracting from the live event. Instead it’s taking one step back and saying how lucky we are.

What do you think are the biggest mistakes that photographers make?
I think the biggest mistake is photographing what’s already been done and what’s obvious. Duane Michaels used to say, “Tell me something I don’t know.” I know what the view out of the Empire State Building looks like; don’t show me the destination, show me the journey. I used to take my son into New York from Maplewood, NJ every Sunday. We’d go do one thing and then come back. I realized it was the journey that made those experiences so special and not the thing that we went to see. In a picture, I want to know what you aren’t telling me. Photograph a secret. Photograph something you see, but you’d never think to photograph, or something you feel but you’d never think to photograph. One of the advantages I have is that the way I photograph is almost a reflex of muscle. I can see something and I don’t have to think about it; before I know it, I’ve taken the picture. 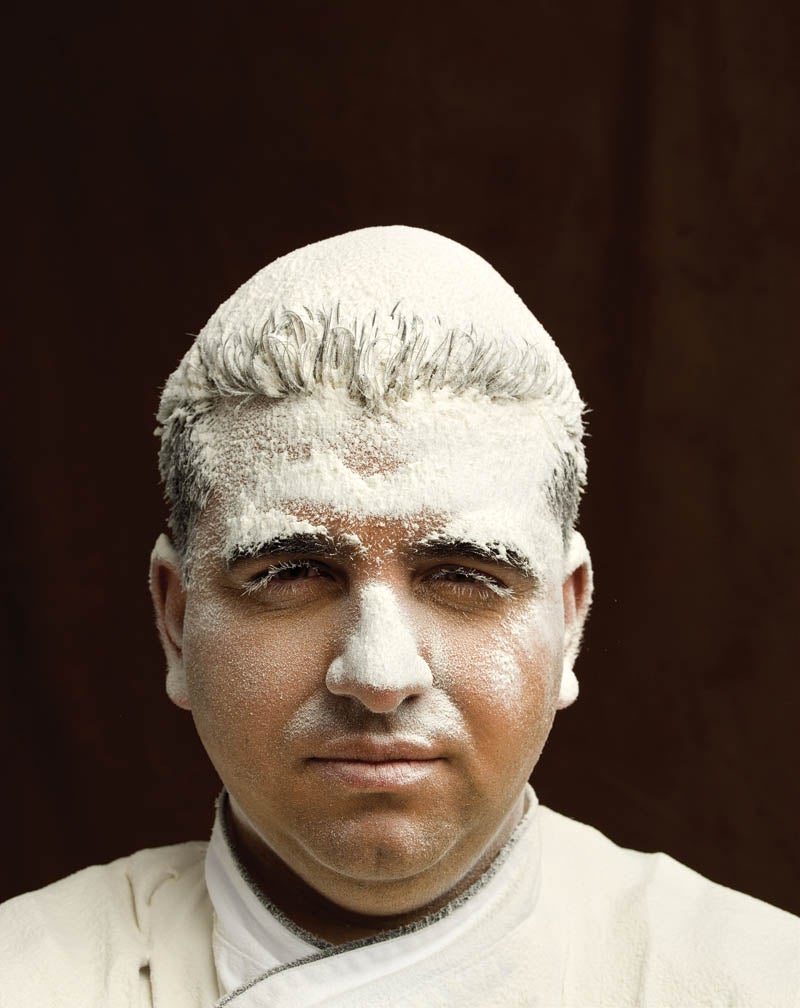 Sifting flour onto the Cake Boss for TLC. 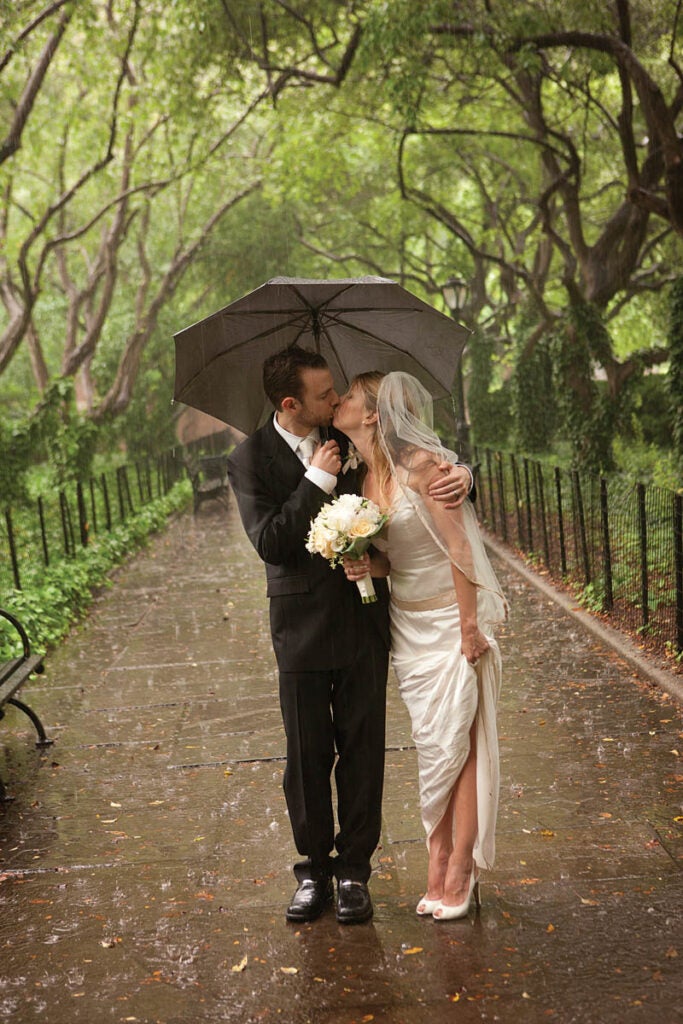 An intimate post-wedding moment made better by bad weather. 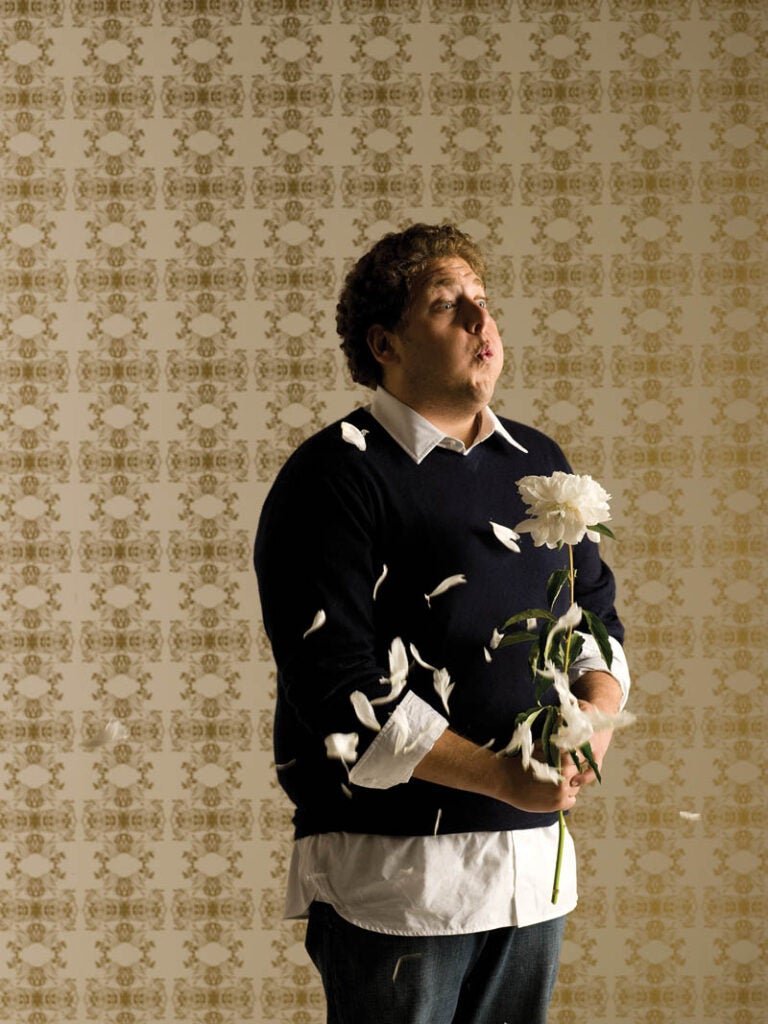 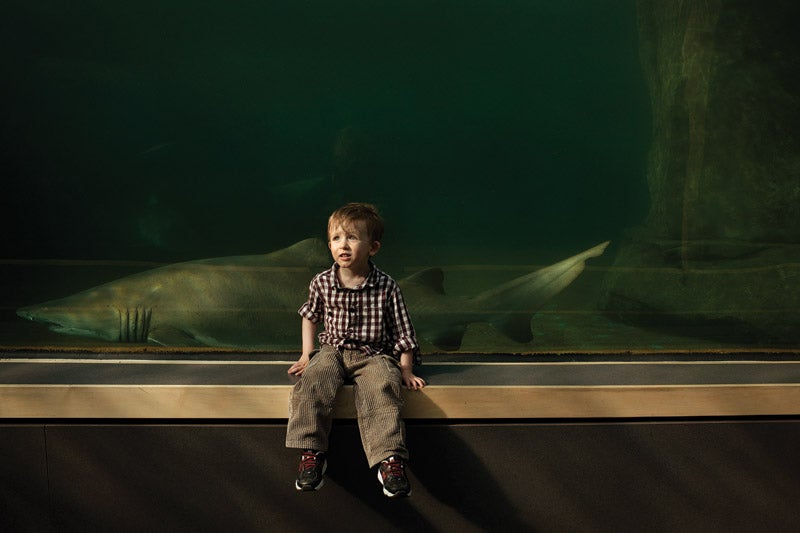 The photographer’s son pauses in some good light while his dad waits for the shark. 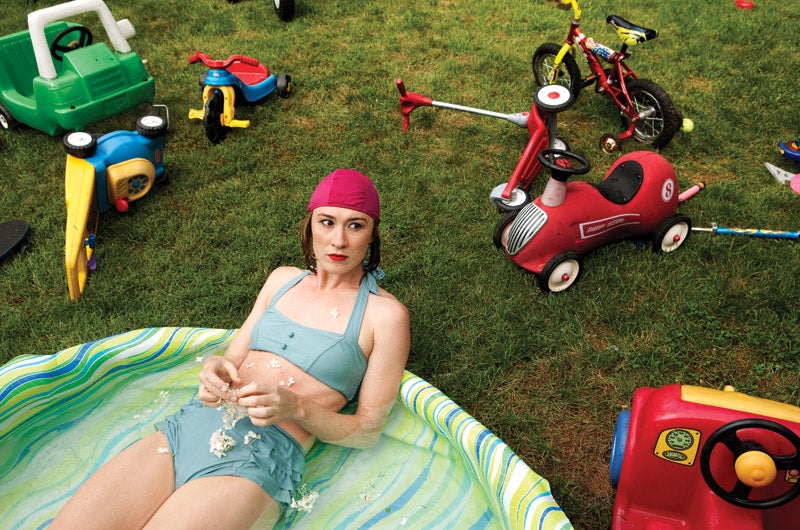 Lange fell in love with Jeni’s Splendid ice cream in Columbus, OH four years ago, and began a still-ongoing project documenting the company, in exchange for their dessert. 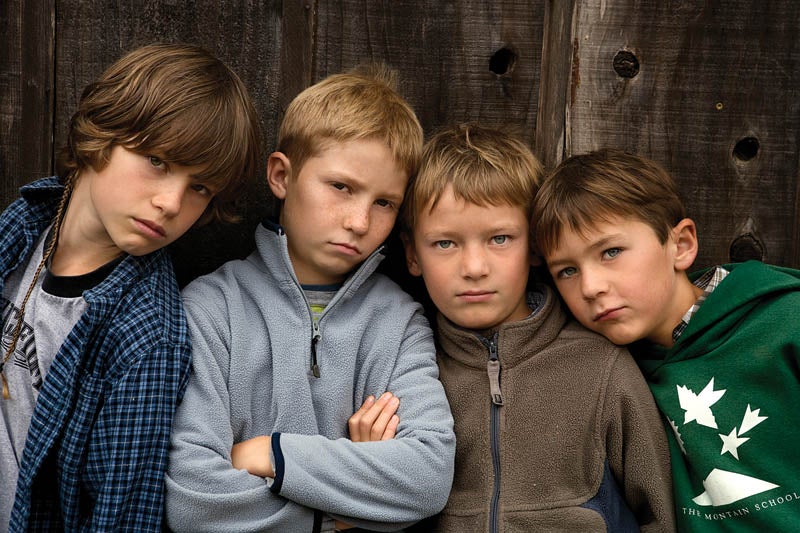 They look posed, but this foursome ran off a split second after staring down the photographer. 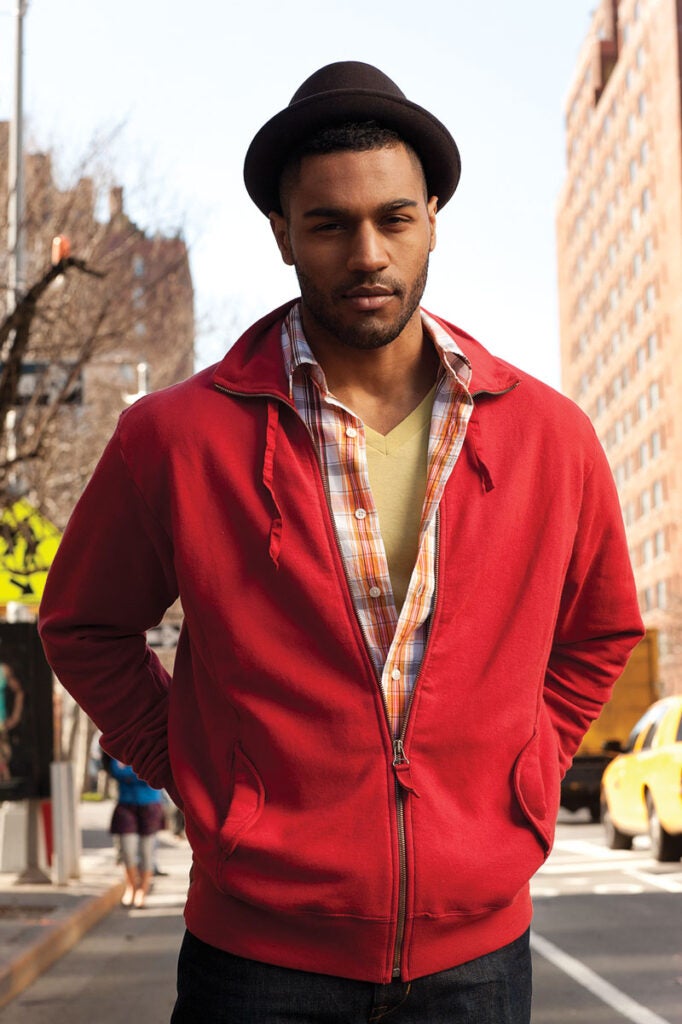 Man on the Street

On assignment for Microsoft, this model was photographed in New York City’s Meatpacking district, where Lange loves the morning light. 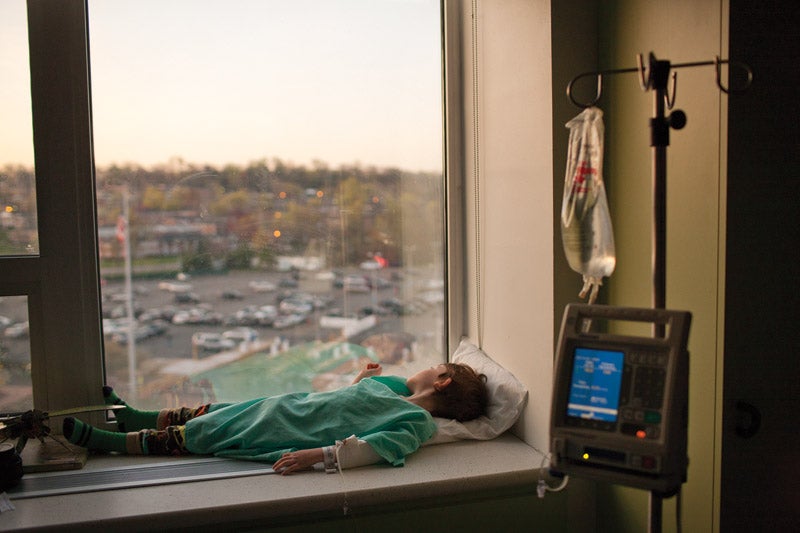 Says Lange, of this photo of his son, awed by the beauty of the sunrise from his hospital room: “This is one of those places you rarely bring your camera— who wants to remember? Yet we were together and it was a moment full of more wonder than sadness.” 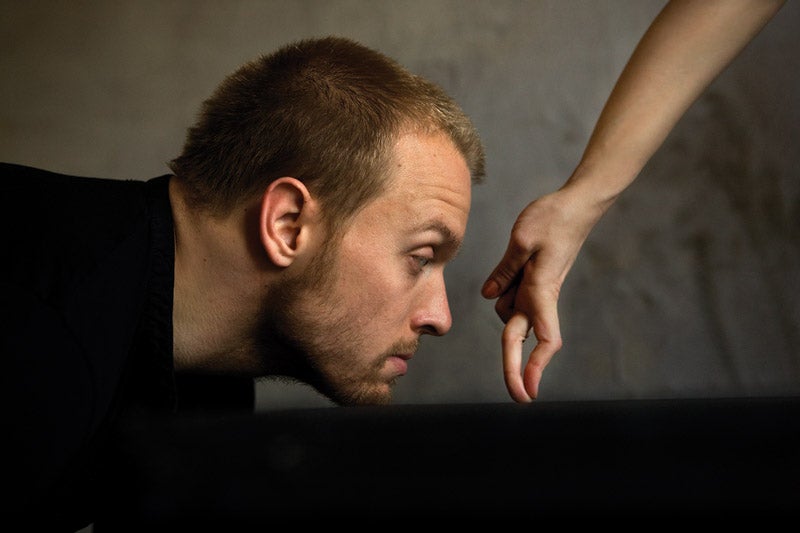 A member of dance company Aszure Barton & Artists, for which Lange is company photographer, during a run-through performance. 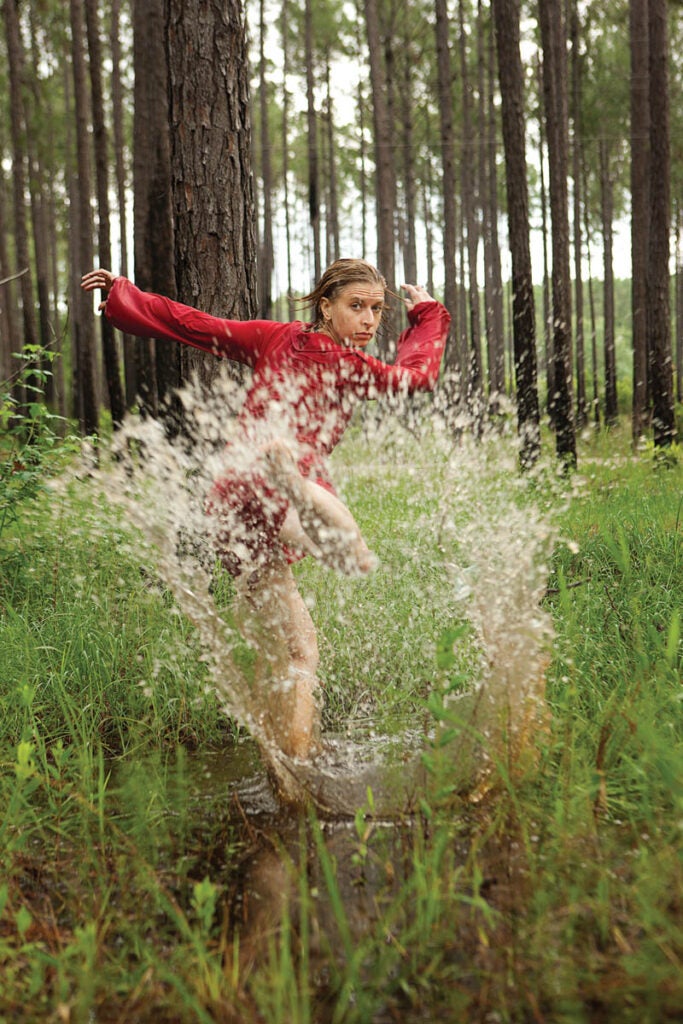 Years into his friendship with choreographer Aszure Barton, Lange and Barton made this picture together in the swamps at White Oak in Florida.
Photography Tips
Portrait Photography