Use the biggest light modifier you own to your advantage 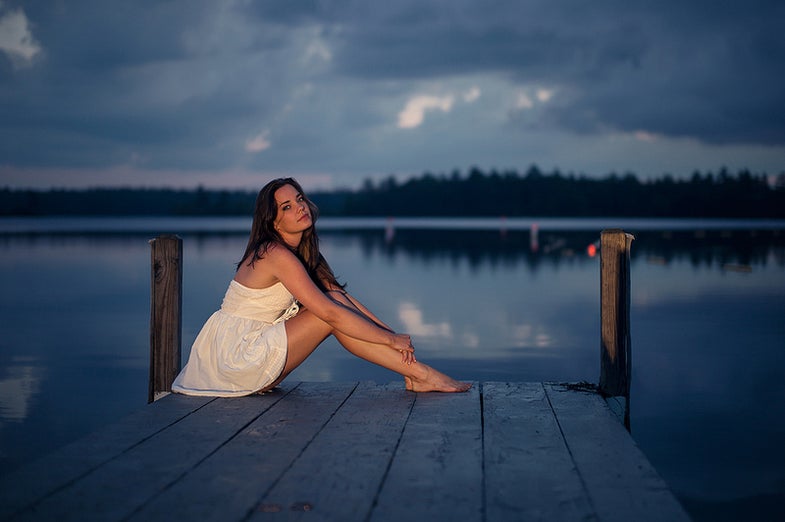 _A while back, we asked our Twitter followers what their favorite lighting modifiers were. We got a whole variety of answers, but when Raymond Larose replied with “car headlights” and a dramatic portrait photo, I was intrigued. Raymond shared some tips for using your car’s hi-beams and lo-beams for making an interesting photograph. _

Night time is the most obvious time to try something like this, but it can work any time when the sun isn’t overpowering the beams from your car. Raymond typically keeps a low ISO and a wide aperture to keep things sharp in dark conditions. “For the image above, I was lucky enough to have 1/60 hand-held and kept the ISO at 160. In darker situations, I jump up to ISO 320 and usually pop the camera on a tripod. I shoot between f/1.4 and f/2 99% of the time.”

There’s a wide variety of things that can effect the color of the light thrown by your headlights. The amount of dirt on the headlights, the kind of bulb that’s installed, and even the moisture in the air can affect the final look, so bringing a grey card is probably a good idea. “I keep the white balance set to auto and adjust as needed in post,” says Raymond.

It’s also worth noting that your car may have more than one set of lights. “My headlights are roughly 5700K as opposed to my fog lights which are much cooler at around 3500,” says Raymond, so be sure to experiment with all your options.

“You basically have two settings with this light source: Hi-beam and lo-beam,” Ray explains. “Not a lot of variation.” Because of this, your most effective technique for changing light intensity is to actually move the car closer or farther from your subject.

“For the image of Mary on the dock, I was about 30 yards back, hi-beams on. The lo-beams were not doing enough. This distance gave the proper illumination against the night sky.” Finding the right distance is a bit of a process and it can help to have someone in the car to move it back and forth.

Getting into your final position can be tricky. “You’re moving a car around, rather than a light-stand.” Because of this, you have to consider things like uneven ground, which will move the light beam up and down.

“I tend to use the headlights straight on, which poses the problem of where to stand,” says Raymond.” If you can get close enough to the car to stand between the headlights, it will cut down the shadows, but because you can’t adjust the light output, that’s not always an option.

For the top image, Raymond came up with this solution: “I had to get myself out of the light, which meant being a little off-center to the right on the dock, and having Mary pose to camera left. You can catch a glimpse of my shoulder on the last pier post on the right.”

In a way, headlights are modifiers in their own right, but if you want you can experiment with other mods like scrims and reflectors. “I have played with modifying the light in the past by taping thin cotton curtains over the headlights,” says Raymond. “I’ve also shot in the thick fog with my daughter, getting some pretty soft light in the process. For the image here, I left them unmodified.”

You can also use gels to change the color temperature of the light, but you’ll need fairly large sheets of gel to cover the lights. And you’ll likely need to cover both lights to avoid unattractive mixed light.

“You need to pick spots that you can get your car to, obviously. But the not-so-obvious piece is having a location with enough space for the maneuvering you need to do to align the light.”