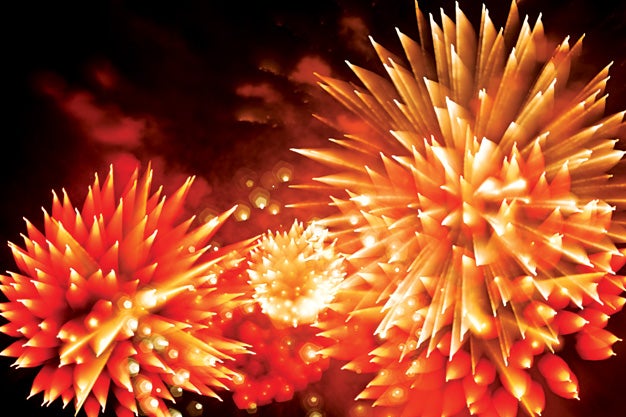 Every summer David Johnson of Ottawa makes his way to the international fireworks competition in Gatineau, Quebec, camera in tow. But for years his photos, though cool, didn’t quite capture “the ooh and ahh experience of actually being there,” as he puts it. Then he discovered focus blur.

Similar to zoom blur, this technique involves manipulating the lens during exposure—in this case, by manually focusing (or defocusing). It requires exposures of a quarter of a second or longer.

In Johnson’s 1-sec exposure here, the photographer rendered the bursts as defocused blurs radiating out from a center point. As each burst flew outward, he sharpened focus, turning them from solid-looking petal-like shapes to pinpoints of light. Focus blur is so popular a technique, it has its own group on Flickr.

Want to try focus blur this summer? Here are some tips, in addition to the step-by-step instructions.

■ Keep shutter speeds relatively short. “When your exposures exceed 1 sec, you start to quickly pick up smoke and haze, as well as multiple explosions, which can be visually confusing if they occur at different times during your refocusing,” warns Johnson.

■ Hold steady. While pressing the shutter release and refocusing, be careful not to jiggle the camera, which can introduce motion blur—not the kind you want here.

■ Watch your batteries. Because longer exposures can drain batteries, charge yours fully before leaving home.

Step 1
Gather your gear. “SLRs are crucial for focus blur, because they let you refocus during exposure,” says Johnson. Other musts: a tripod, and a normal to mid-range telephoto prime or zoom lens.

Step 2
Pick a camera position. Johnson prefers pure black sky behind his fireworks, and he avoids buildings, trees, and other distractions. Position yourself upwind of the display, so the smoke doesn’t come between you and the bursts.

Step 3
Compose and test. With your camera on the tripod, aim the defocused lens toward the expected display. Set a low ISO and the shutter to Bulb. The size of the lens aperture affects the width of the fireworks’ “petals,” so make a few test exposures, starting with Johnson’s settings of 1 sec at f/4, ISO 100—if the petals are too narrow, open the aperture wider.

Step 4
Make your exposures. When the fireworks go up, press and hold the shutter release. As the burst fans out, evenly rotate the focusing ring until the image is sharp. Release the button to close the shutter.

Final Step
Experiment. As the show goes on, experiment by altering the speed at which you refocus, the aperture you use, and the direction of focus, going from blurry to sharp in some shots and the reverse in others.