You Can Do It: Use Two Lights to Freeze Action 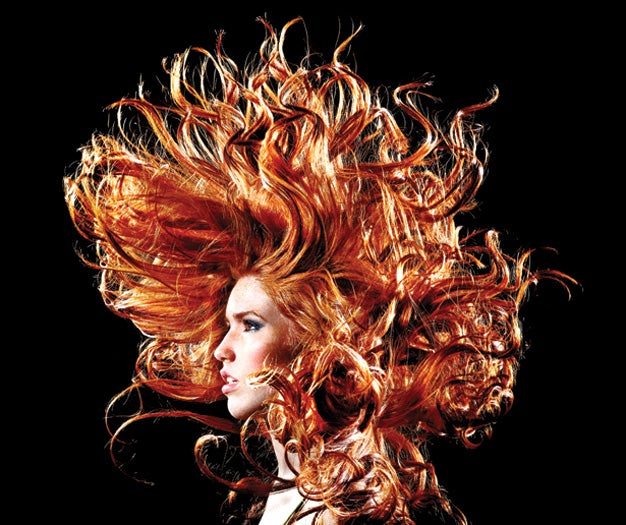 Tadder exposed for 1/1600 sec at f/11, ISO 100. He could set such a fast shutter speed and have it assist in freezing the hair mid-air, because the leaf shutter in his 110mm f/2.8 AFD lens, like all leaf shutters, can sync with the flash at any of the shutter's speeds. Tim Tadder
SHARE

Tim Tadder, one of the country’s hottest advertising photographers, has made a career of freezing all sorts of action in its tracks—like the billowing red hair of model Sarra Hansen in the photo shown here. Held aloft by a massive industrial fan on the floor behind her, her tresses flapped wildly, yet Tadder, based out of Encinitas, CA, still managed to capture every strand of hair tack-sharp.

How? With twin-tube strobe heads. Also called bi-tubes, these are unlike most studio lights in that they have two flash tubes and two power cords per head.

Tadder’s, from Profoto, use U-shaped tubes that were powered by two Profoto 7a power packs each. This setup afforded him shorter flash durations and quicker recycle times than would have been possible with a single-tube head producing an equal amount of light.

“To achieve the kind of sharpness you see in the moving hair here, I needed action-freezing power of really short flash exposures,” says Tadder. “It’s that frozen quality that makes the image so striking. I didn’t want blurry hair.”

Because Tadder had two power packs per head, he could have produced twice the light, 4800 watt-seconds, from a single head had he chosen to use full power. But he didn’t need that much light. He modified the output with a beauty dish and 20-degree grid, and used reflectors for fill.

Tadder offers a few other tricks to pull off a shot like this:

● DON’T USE a regular house fan. It won’t be strong enough. Rent a large industrial-grade wind machine and set it to High. It should be able to suspend all the hair—if only for a moment or two—so you can get the shot.
● DON’T WEIGH DOWN your model’s coif with lots of hair product.
● AVOID HAVING THE MODEL toss her hair around. “Yes, the head toss gets the hair moving, but it’s the huge fan that keeps it up,” says Tadder. “Besides, you could hurt the model’s neck.”
● “AND, OF COURSE, make sure your model has tons of hair,” the photographer advises.

To freeze his model’s hair mid-flight, Tim Tadder lit her with two Profoto ProTwin Tube flash heads (A), each outfitted with Profoto beauty dishes (B) and 20-degree grid attachments, and powered by a total of three Profoto 7a power packs (C). Two reflectors (D) contributed front fill, and his background was a roll of black seamless (E). A 50-inch industrial fan turned to its highest setting (F) lifted the model’s hair aloft. Tadder outfitted his Phase One P65+ camera and digital back with a Phase One 110mm f/2.8 AFD lens (G), and tethered the rig to a desktop computer (H) running Phase One’s Capture One Pro 6 software. “In post, we used Adobe Photoshop extremely lightly for this shot,” says Tadder. “We just fixed some stray hair and cloned out some of the awkward bits.” What was the hardest thing about producing this shot? “Nothing,” he answers. “If I were digging ditches or curing cancer, we could talk about difficulty. This was ten exposures of pure fun.”