How to shoot epic landscape photos of the night sky

You will want to bring some coffee! 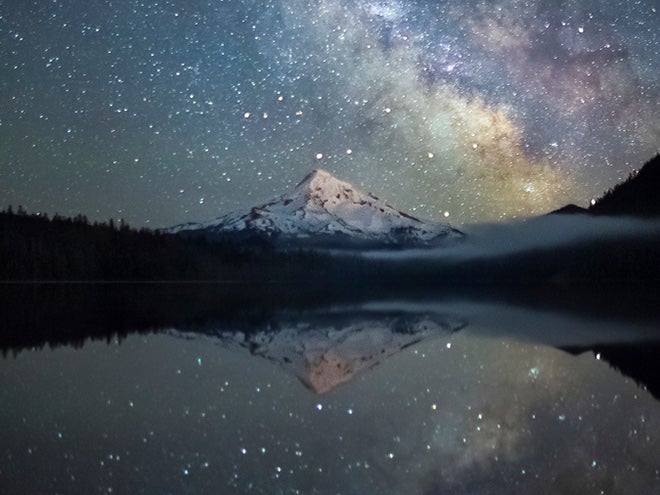 A star field reflected in the water. Ben Canales
SHARE

Growing up in New Jersey, photographer Ben Canales didn’t have a lot of stars to look at. Now, however, he spends many nights out in the cold with his camera pointed towards the horizon, capturing the heavens and the land below them. He shared with us some crucial tips for getting amazing shots of the night sky.

What do you look for in a location for shots of the stars?
One of the first things you have to do is get away from the city. Whether you’re traveling or at home, you have to go somewhere without light pollution. Ideally, you can try to get at least 50 miles from a big city if you want really clean skies.

After that, I typically look for a landscape feature I can key on. Is there a mountain on the horizon or a lake that will provide reflections of the stars? I often look for a human element like an old barn or a ruin or something like that to include in the foreground.

How do you balance the foreground with the light of the stars?
I try to make everything completely dark. If I start with complete darkness, then it’s up to me to add light. I can add it at any level I want to. On a moonless night, the stars set a certain light level. Then, I’ll have a headlamp or some small LEDs I can position in order to light paint onto the scene. I can choose what I want the viewer to see. I’ll take anywhere between five and 25 shots of a certain scene using different motions with the headlamp until it starts to look right.

How do you manage the light of the moon?
You can go out when there’s no moon—what astronomers call a new moon—up to a half moon phase or less. Once you get more than that, the moon becomes so bright that it can actually make the sky look like daytime. On a full moon shot, you have to peer into the sky to see the stars.

No moon gives you the most clarity in the stars and the brightest milky way and all that stuff. Once you start factoring in the moon, you can use it to illuminate a really big landscape scene. It’s always important to be aware of the moon phase: when the moon is rising or setting and what angle it is coming from. You don’t want to be surprised by it.

You have to have a pretty good understanding of the night sky to get shots like this. How do you track where the stars will be?
There’s a fantastic online program called Stellarium. It’s kind of like Google Earth for stars. You punch in the location at which you’re going to be and the time you’re going to be there and it takes you to that spot and simulates the star field, the moon phase, and the brightness of the location at that time. You get a 360-degree view that you can scroll around and look at.

Darkskyfinder.org is useful as well. It uses population densities to try and guess about light pollution levels. It’s a good way to research where you should go.

Does the time of year during which you’re shooting make a huge difference?
It has taken me a couple years to learn something that astronomers know by heart. In the summertime, from about June to October, the milky way is particularly vibrant. One reason is that it’s standing vertically until about August and that’s what’s really going to make it show up in our shots. And for us northern hemisphere folks, there’s a particular bright section of the milky way that only rises above the horizon in the summer months. In the winter months, it lays perpendicular to and never crests the horizon. It also gets more lost in the light pollution.

The southern view is what you want. The northern view looks very messy. It looks like someone spilled a salt shaker into the sky. The southern view has that globular glow. So, when you’re picking a location, you want it to have a non-light-polluted view of the southern half of the sky.

How does the weather play into a successful nighttime star shoot?
Over the years, I’ve learned to interpret the cloudy descriptions on weather websites. If it says mostly clear, then you’re fine. Passing clouds are fine. Partly cloudy is usually the tipping point and once they say mostly cloudy, then it’s usually not worth trying. You’re going to go anywhere between 45 minutes and three hours, so there’s a big commitment to these efforts.

What kind of shutter speed are you using to keep the stars in place rather than having them form trails across the photo?
Thanks to cameras with great high ISO performance, you can get a static shot of the stars in under 30 seconds. And that’s really only happened in about the last three or four years. When I first got into this, everyone was doing star trails, but it was mostly because they couldn’t get their camera’s ISO up high enough. Now, because of these insanely high ISOs, people are getting cleaner 30-second shots that freeze the position of the stars.

What if we actually want the star trails? What’s the best way to go about creating them?
There are two methods for creating star trails.

The static method is where you take a 30-second exposure and keep repeating it over and over with something like an intervalometer. Then, in Photoshop, you just combine them all as layers into one file. You switch the blending mode to lighten and Photoshop will progressively overlay the stars so you get trails. This is getting popular because it also gives you the files you need for a time lapse video all in one effort.

Then there’s the old-school method where you attach a cable release to the camera and you do single exposures of anywhere from 30 minutes to three hours. So, instead of using ISO 3200, you’re going to ISO 400 and instead of F/2.8, you’re using an aperture like F/8. You just have to do the math to compensate the extended shutter time.

Both methods have their own distinct look.

Your shots are very much landscape photos, do you always use a wide angle lens?
I do enjoy a wide angle lens. You always want to see more of a scene. But, I’m realizing that my particular desire is for a 24mm lens. A slightly tighter shot brings more attention to whatever I choose to be in the foreground. If I want to get a really wide shot, I’ll do an 8-10 shot panorama that will give me a really wide view, but without the distortion.

What kind of gear do you need to bring for a night shoot?
You need a tripod, obviously. An intervalometer is also nice if you’re going to be doing star trails. One thing I found out about was those little hand warmers that you put inside of gloves or boots. I bring some of those and tape them around my lens barrel because as the night goes on, there tends to be moisture condensation. You’ll set up a star trail or time lapse shot and everything will be fine. Then, later in post, you find out that the lens fogged over at 2 AM or something. A hand warmer on the lens will keep the temperature high enough for that moisture to build up.

A lot of people don’t realize how cold it gets shooting stars. It’s not that people have never done anything at night before or have never been cold, but usually all our activity outdoors is actually active or you’re sitting around a campfire. When shooting stars, you’re standing by a tripod for 30-seconds to five minutes at a time. The only motion you’re doing is to push the shutter. We’re not generating any heat, so dress like five times as you think you should because there’s nothing worse than shivering through the whole night and not being able to concentrate on the shots. I dress like the marshmallow man out there.

What do you use for a light source when it comes to painting the objects in the foreground?
I use a headlamp as a light source in a lot of my shots. Everyone thinks you need a bright light source, but they forget you’re trying to balance your foreground with starlight. A headlamp is plenty. Sometimes I’ll bring a little lantern. Those constant light LED panels are fantastic if they’re dimmable. I’ll put them on the lightest setting, it’s barely turned on, and that’s usually enough light to blast a whole scene. I never bring a big giant mag light or anything like that.

Can you offer some specific camera settings that will give a good starting point for a star shot?
The go-to settings are 30-seconds at F/2.8 or whatever the fastest aperture your lens offers. Then set it to ISO 3200 or higher. Shoot RAW because you want all that data to push and pull in post. I generally set a white balance of tungsten or fluorescent. If you do auto balance, you’ll likely get this ugly orange night sky. With time lapses, white balance can also change as the night goes on. The more that you can get right in camera, the easier it is when you get home.