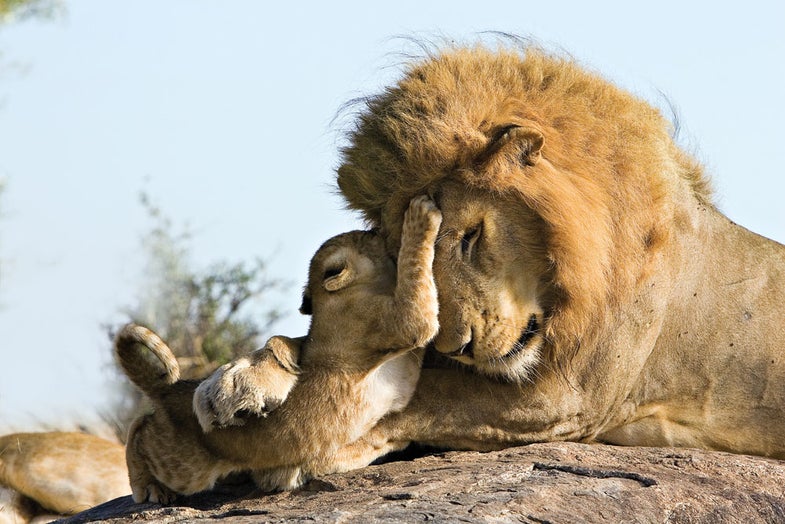 After giving birth, a lioness shelters her newborns in a den, raising them completely alone; the rest of the pride—including their father—doesn’t see them. Wildlife photographer Suzi Eszterhas had stumbled across such a mother and her two-week-old litter while shooting at the Masai Mara Reserve in Kenya, and knew instinctively that these young lions offered a golden opportunity.

She also knew she’d have to wait. For weeks, Eszterhas stayed at the den site, often not shooting a single image. Finally, when the cubs were between five and seven weeks old, and too rowdy for Mom to handle alone, the lioness trotted out her young to meet the rest of the pride—and their father, for the first time. The photo of that first encounter has become one of her best sellers, and she considers it one of her finest moments as a photographer.

Much of the photography of baby animals hinges on patience, whether waiting for just the right moment to shoot, working to gain the trust of an animal, or even waiting by the phone for a scout on another continent to ring with news.

“If you spend enough time around these animals, if you wait through the slow periods, you get these incredible action-packed moments,” says Eszterhas. “You get to witness stuff that’s very special and very rare.”

Student of Behavior
Eszterhas grew up watching birds in her backyard and taking notes on their behavior. Not only did it hone her eye (and patience), but it also instilled a belief that great wildlife photography comes only with a great understanding of animal behavior. Prior research is crucial, and Eszterhas will spend months, even years, talking to researchers and reading numerous studies on whatever animal she plans to photograph next.

That study then translates into intense observation in the field. “It helps to predict where you’re going to find them and where you might take a good photo,” Eszterhas says.

While working with orphaned three-toed sloths at the Aviarios Sloth Sanctuary in Costa Rica, Eszterhas followed a wild mother and her newborn into the forest. Small, well-camouflaged creatures that hang high in the trees, the sloths were a challenge, but knowing they typically feed on the same tree for three to five days, she learned the mother’s patterns, and could soon predict how long she would stay in a tree, and where she’d go next.

Understanding animal behavior can also keep you safe. Eszterhas notes, for example, that a lion will yawn when it’s happy and full, but a grizzly bear’s yawn means it’s stressed and could charge.

Observing and understanding behavior is also crucial to gaining the animal’s trust. Eszterhas stresses the importance of building a relationship with the animals, to prove you won’t harm them or their young: “Once you get their trust, if you ever violate it, it’s hard to get it back.”

This is a particular challenge with mothers who have just given birth. “Once they get a newborn, even the most habituated, most calm, most workable mother can turn very sensitive, somewhat schizophrenic, so you don’t know how to predict her behavior,” she says. “There’s a lot of maternal hormones that are pumping through them where it’s all about protecting and hiding their young.”

As the saying goes, you never want to get between a mama bear and her cubs, but Eszterhas has found ways—even when photographing brown bears (grizzlies). The time it takes to gain an animal’s trust, again, varies: While some gorillas will let you approach them just two days after giving birth, she spent weeks without shooting a single image while habituating a bat-eared fox couple.

The Right Gear
When it is time to shoot, Eszterhas uses a Canon EOS-1D X (having recently upgraded from an EOS-1D Mark III) and loves that it’s almost impossible to fill its buffer, considering that she sometimes snaps thousands of images a day, often in long bursts. Advances in sensor technology and processing have also allowed her to photograph monkeys in a thick jungle at ISO 6400 with relatively low image noise.

The lenses Eszterhas uses often vary from species to species. For big cats and bears, she almost always uses a 500mm tele, while for apes she uses primarily a 70–200mm zoom, sometimes a 300mm, and keeps a 1.4X teleconverter in her back pocket.

But on-the-fly adjustments are necessary depending on the size of the animal and proximity, to say nothing of working exclusively with daylight. Eszterhas admits there’s plenty of trial, error, and luck involved, whether her subject is the lioness choosing to introduce the cubs to the pride during the day instead of night, or the bat-eared fox family having their pups in a rather shallow den.

Locating animals with newborns is another challenge in itself. For about a year and a half, Eszterhas was on call for four female tigers to give birth. Finally, “I get a call from my contact in India, a real garbled, clearly overseas voicemail saying, ‘Rajberah’s nipples look good,’” she laughs. Observing a mother’s swollen or ringed nipples in the wild is one indication of a new litter, and the specific mating patterns of animals like ring-tailed lemurs also make work easy.

But Eszterhas is often at the whim of nature, even with the help of researchers and conservation groups advising her where animal families might be found. And some of the biggest obstacles in wildlife photography are due to human agency, whether from poachers, deforestation, or the social or political issues of a specific country. “You have to work with some local obstacles, but in the same respect you gain—you have to gain—an incredible appreciation of the cultures you’re working in,” she says. “If you don’t, you won’t be accepted, you won’t be respected, they’ll boot you out.”

Not All Warm & Fuzzy
What Eszterhas seems to love most about her photography is all the drama that comes with babies. Tracking cheetahs, she’s photographed riveting gazelle hunts and a mother instructing her cubs how to hunt; she’s also witnessed the tragedy of a cheetah losing all five of her cubs. “It’s really not just about the warm and fuzzy soft portraits, it’s about the whole stories, all these challenges that these animals face as they grow up.” she says. “And some of them aren’t warm and fuzzy at all.”

Most of the photos here appear in Eszterhas’ newly completed Eye on the Wild, a children’s book series whose six volumes each cover a species from birth to adulthood: Cheetah, Gorilla, Lion, Brown Bear, Sea Otter, and Orangutan. The photographer was adamant that they be aimed at children, believing that commitment to wildlife conservation and passion for photography must begin at a very young age.

Eszterhas does limit her photos for kids’ publications to the warm and fuzzy, so her more stark images, such as the hunting cheetahs on page 96, do not appear. “That would be way too much for the kids to handle,” she says.

Aspiring wildlife photographers note: Great images can often be found close to home. After traveling from Antarctica to the Arctic and everywhere in between, Eszterhas returned to her home in San Francisco to shoot an animal she grew up photographing: sea otters.

“Here’s this project that just kinda came around full circle, brought me right back to where I started,” says Eszterhas. “And I loved it, I loved every minute of it, working close to home. One of the things I think about traveling that’s ironic is, especially when you live in a place like Northern California, you realize actually how beautiful it is, and how amazing it is here, and how much wildlife we have on our doorstep.”

Suzi Eszterhas’ Eye on the Wild, published by Frances Lincoln Children’s Books, is available on amazon.com. See more of her work, and info on her tours and workshops, at _suzieszterhas.com._ 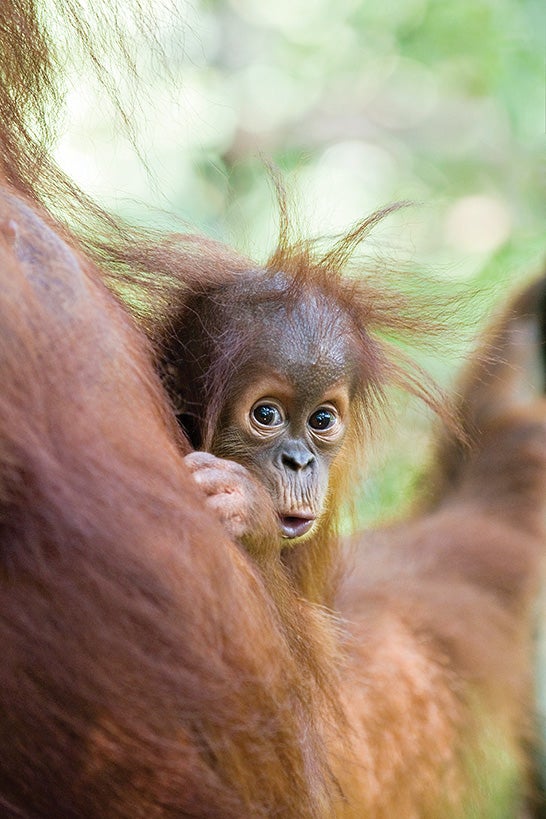 This 9-month-old Sumatran orangutan is one of only about 7,000 left, their homes continually destroyed by deforestation. Eszterhas says her photography “is not just about the wildlife, not just about the animals, it’s about the politics—you can’t ignore it.” Shot made with a Nikon D700, 70–200mm f/2.8 Nikkor lens, 1/100 sec at f/4.5, ISO 1600. 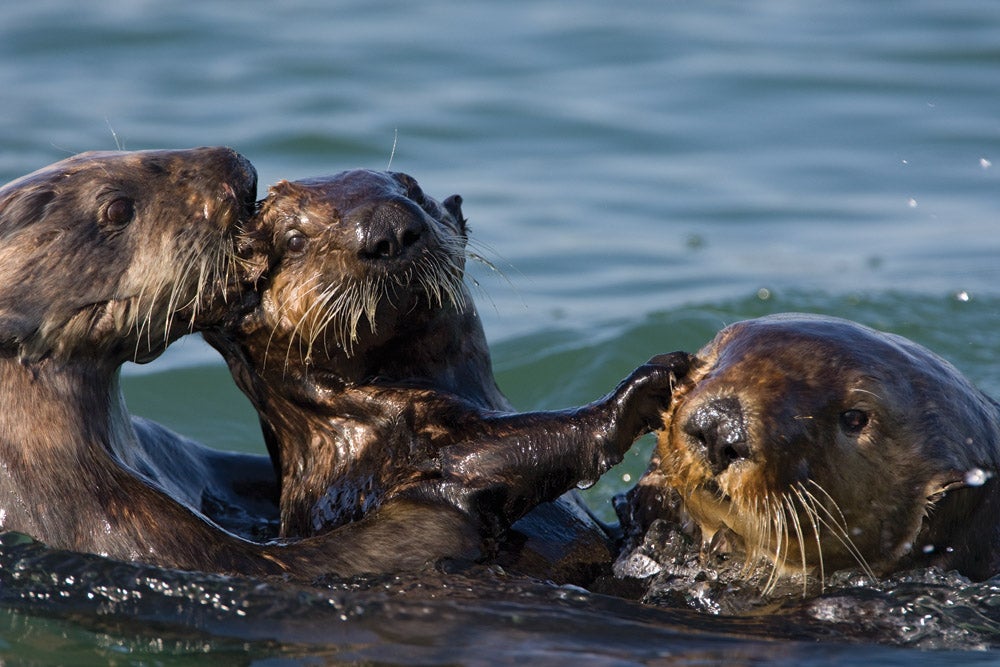 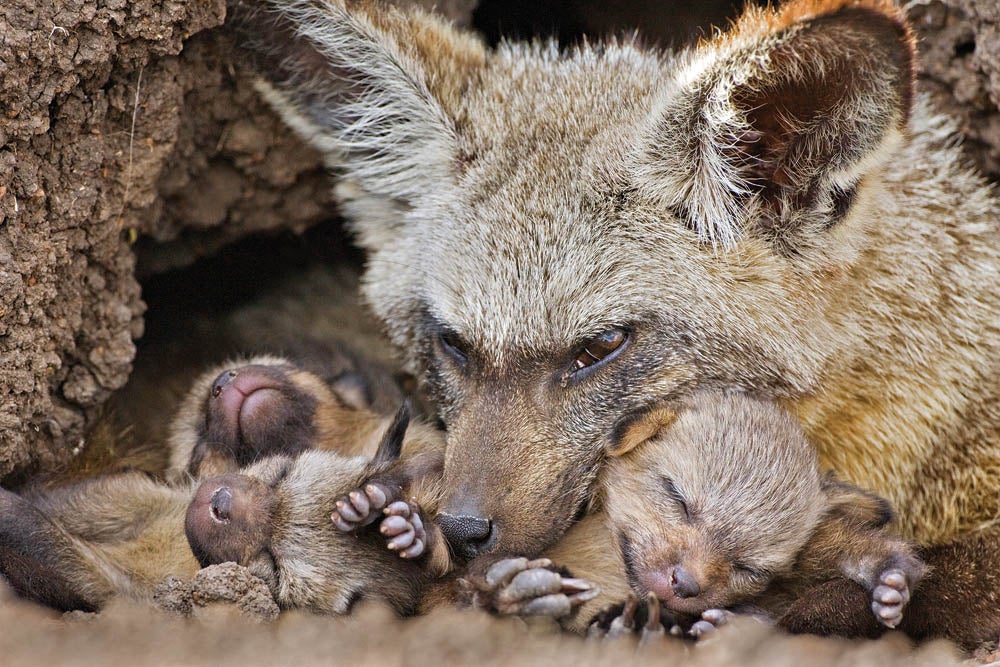 Masai Mara Reserve, Kenya
A new father guards over his 13-day-old pups in his den. The photographer used the same gear as in the otter photo, facing page, minus the teleconverter, to make the shot at 1/320 sec and f/7.1, ISO 640. 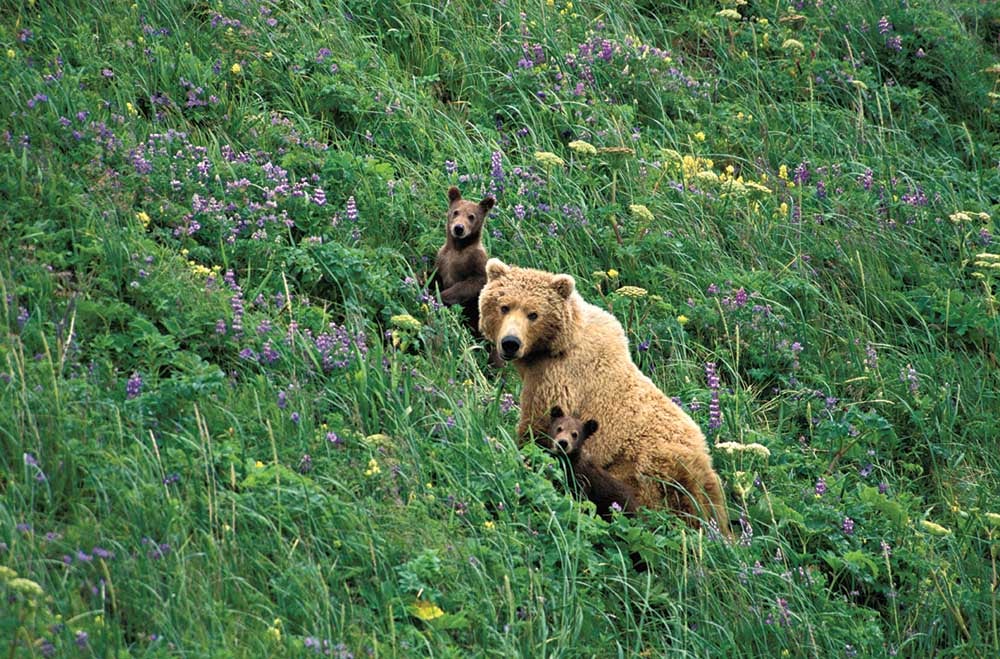 Eszterhas shot these brown bears in an area of Alaska where they are generally comfortable with people (Katmai National Park), but she still advises extreme caution—she works with an expert bear guide, and says if a sow looks stressed, don’t mess with her! Shot on Fujichrome Provia 100 in a Nikon F5 with 500mm f/4 Nikkor lens. 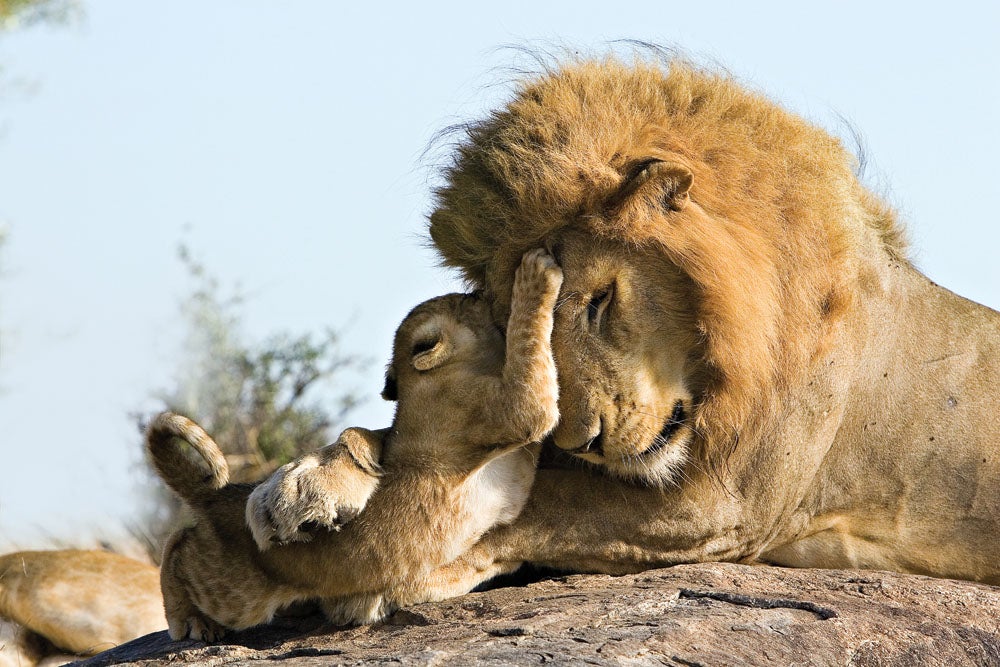 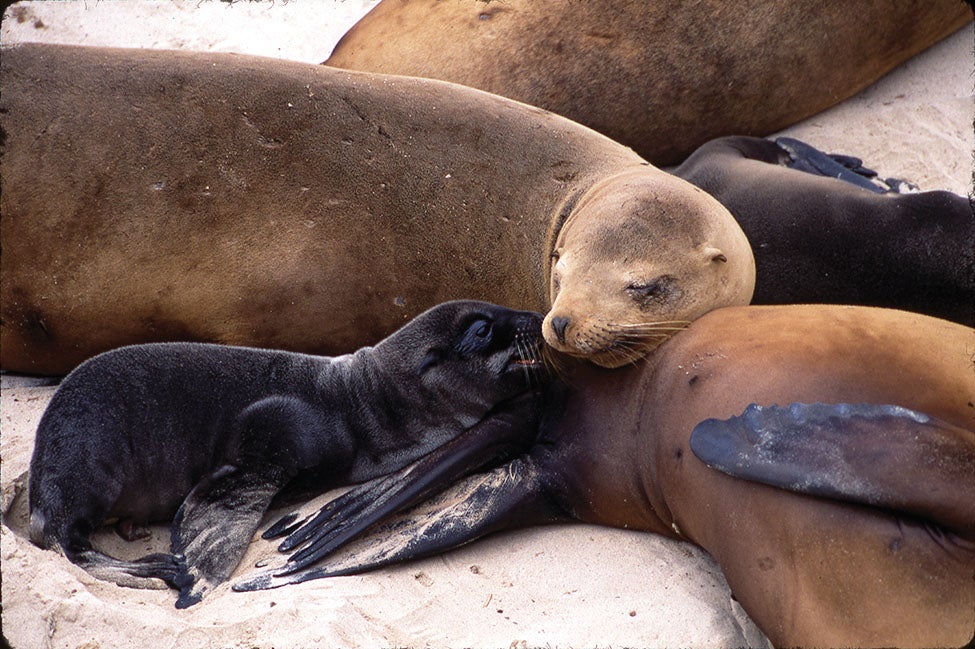 Eszterhas urges photographers to learn to take in every detail of their surroundings. “What the animals are doing, where the light is, where the vegetation is, is it in your way, can you go on this side, can you go on that side?” She captured this 2- to 3-day-old California sea lion pup nuzzling its mother on San Miguel Island, CA on Provia 100 with a Nikon F5 and 500mm f/4 lens. 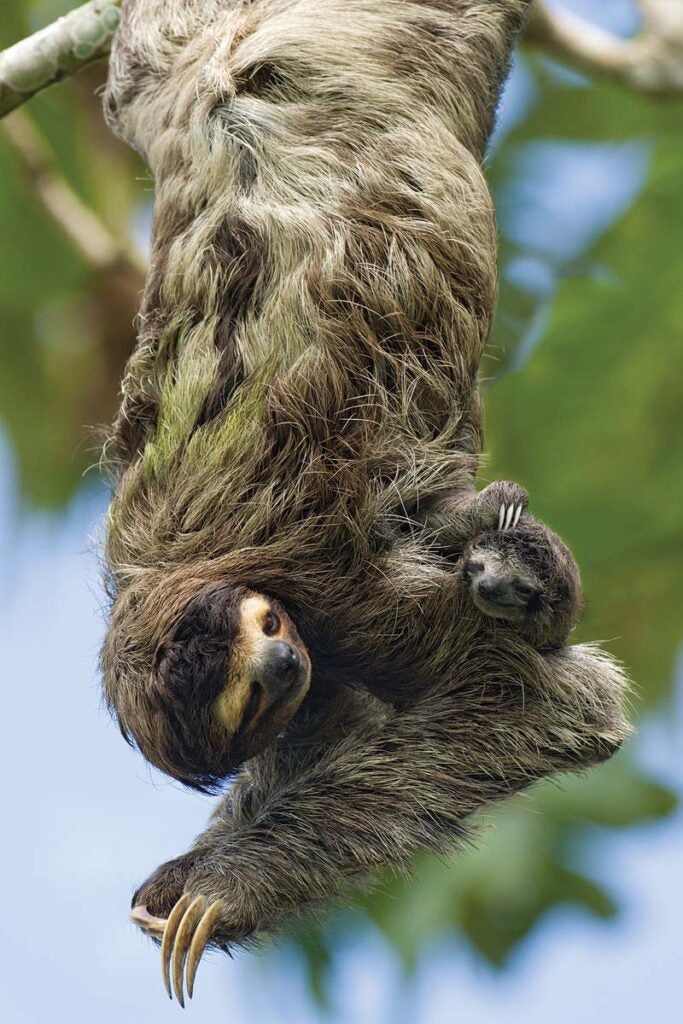 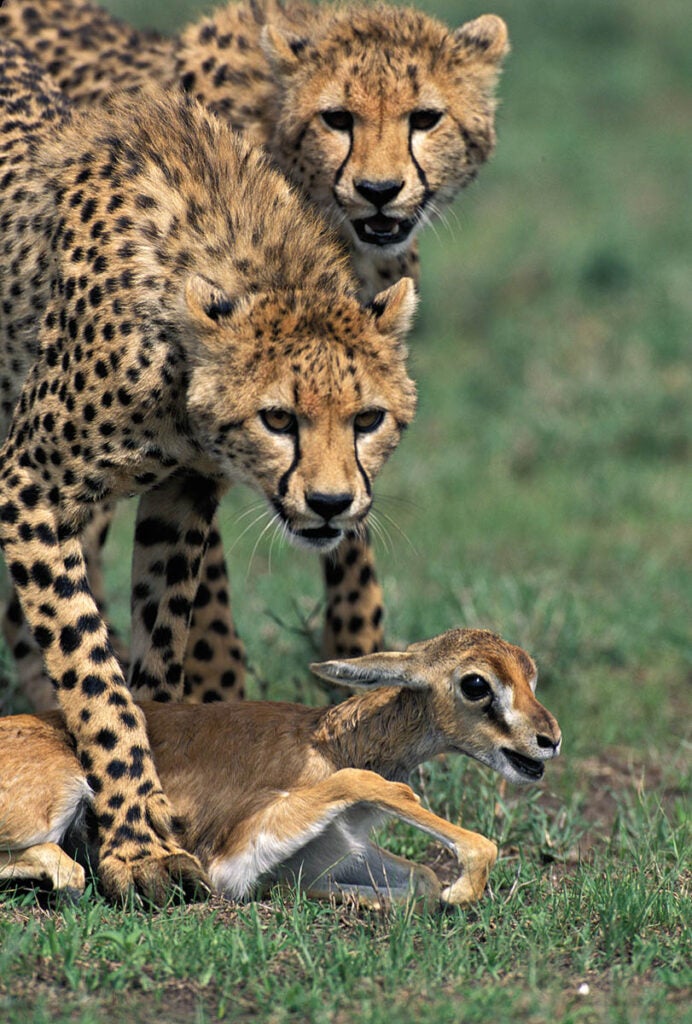