My Project: A Father Uses Photography To Communicate With His Autistic Son

In his series "Echolilia," professional photographer Timothy Archibald explores his relationship with his autistic son Elijah 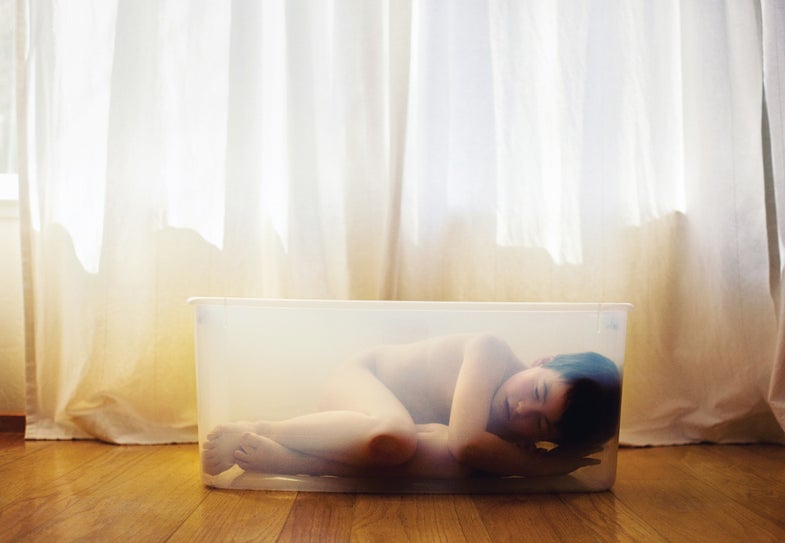 Echolilia depicts Elijah's favorite rituals, such as listening to music on the lawn and curling up in a toy bin. Timothy Archibald
SHARE

When the San Francisco-based photographer Timothy Archibald began photographing son Elijah at age 5, his intentions didn’t extend beyond documentation. Elijah was socially withdrawn, fixated on things like mechanical objects and a ritual need for repetition. One day, Archibald snapped a few pictures to bring to behavioral specialists—Elijah was later diagnosed with autism.

But that first shoot would turn into a unique three-year collaboration between father and son. The results are edited into a series titled Echolilia—a term that describes the repetition of phrases, common among those with autism. Archibald’s photos capture Elijah’s repetitive rituals.

The series began with capturing habits that had driven Archibald crazy. “There were things that Elijah would do with his body, that I couldn’t get him to stop,” he says: teetering on the edge of the sofa, curling up inside a toy container, or lying on the lawn every day to listen to music.

Once he began shooting these moments, their roles shifted. “He didn’t like being the subject, but he liked participating,” Archibald says. When shown a photo of such behavior, the boy would suggest doing it in another way or another place—both of them were interested in the process.Looking together at the back of the camera, “we had this mutual sense of discovery,” Archibald says. “It took me out of the role of a dad, and taught me to accept his differences.”

Elijah, receiving positive rather than negative attention for his rituals, could share something special with his dad and has started taking his own photos.

Most of all, though, Echolilia is a document of a father and son creating their own visual language.

Archibald’s photos have appeared in Time_,_ Forbes_, and_ Smithsonian_. See more at timothyarchibald.com._ 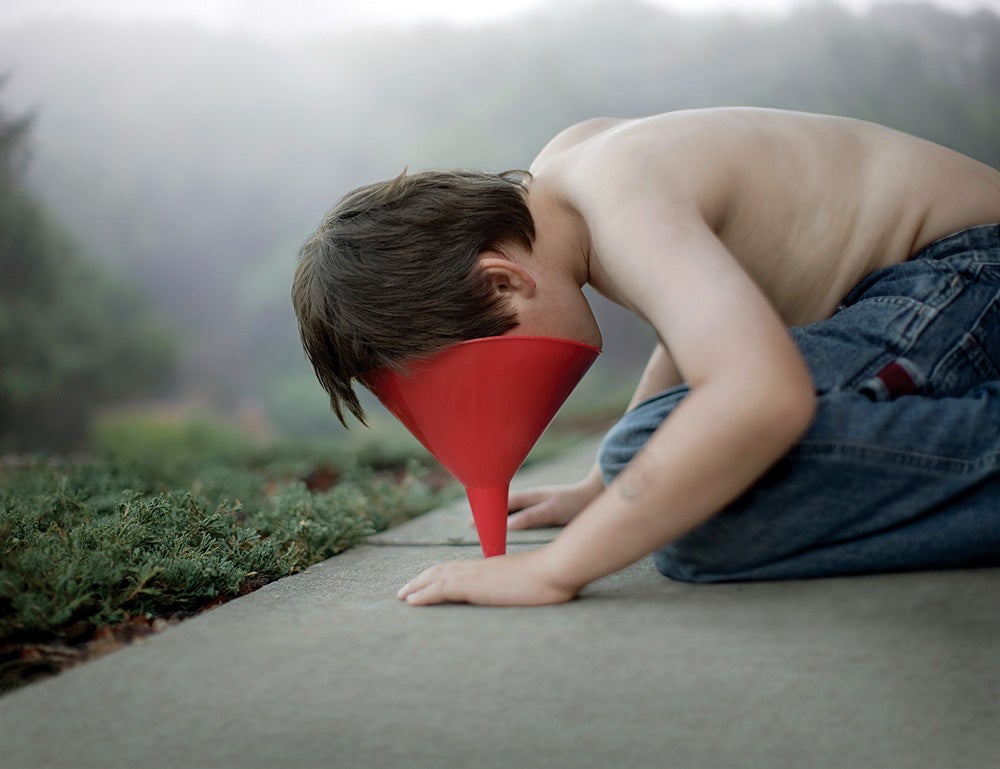 There is a quality of utter distractedness that Eli often times exhibited, punctuated by times of hyper focus – this type of mental focus that no one could break him free of. This image that resulted when he realized the kitchen funnel fit perfectly around his head seemed to represent in a visual manner this quality of hyper focus. 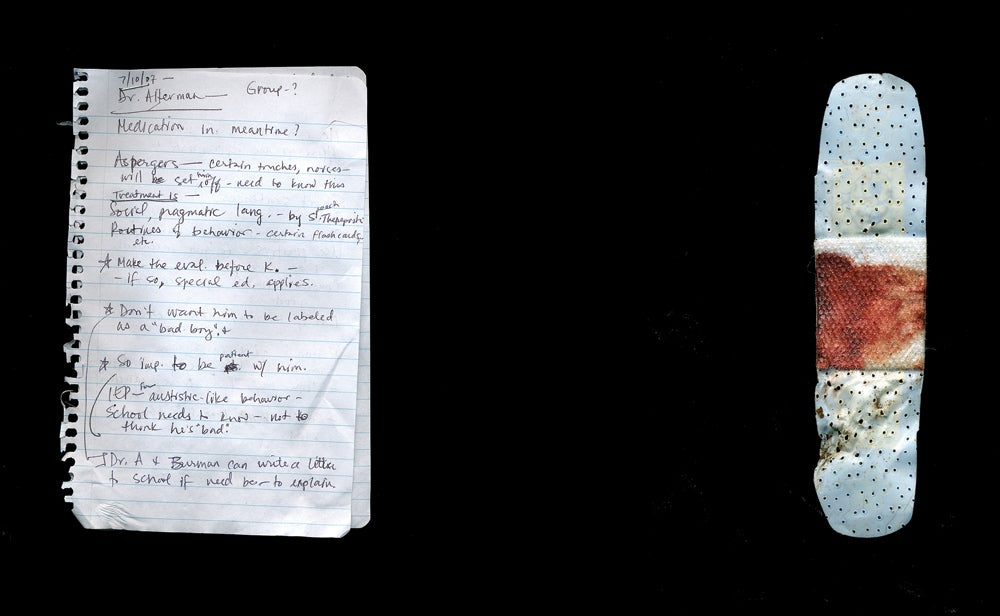 Notes From The Appointment

As all of our concerns began steering to Eli and what made him different, I began to collect our notes and items that seemed to document our days. Here was a note page from an appointment we made with a specialist, paired with an everyday mundane part of childhood – this simple band-aid. 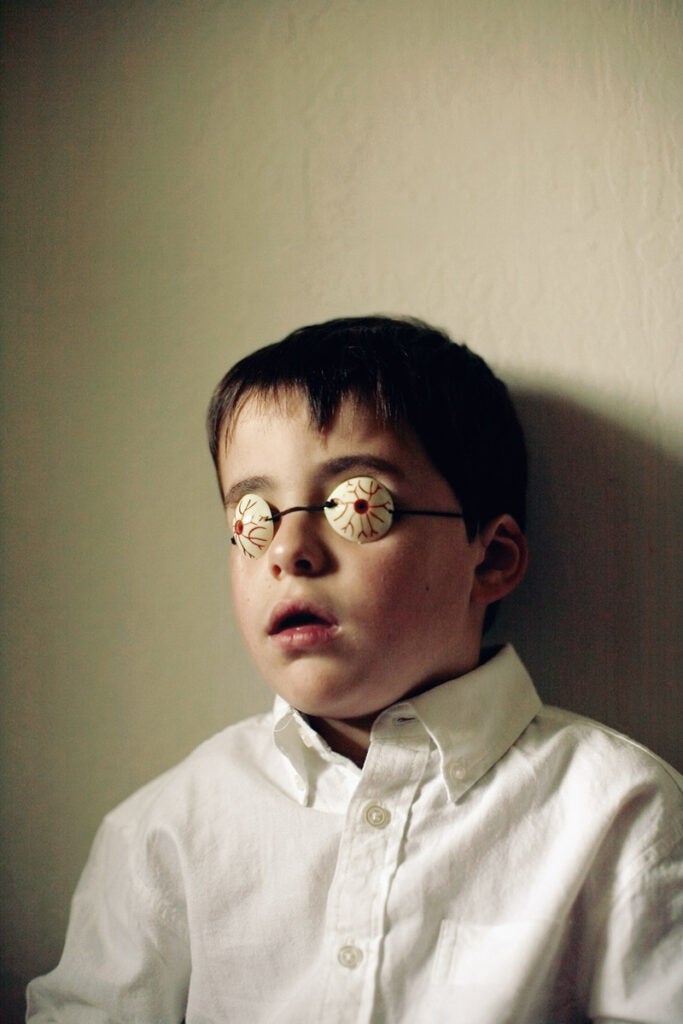 One Halloween Eli became preoccupied with a cheap pair of plastic eyes that fit over his own. They allowed him to look radically different to his toddler brother, pets, and friends – confusing them and scaring them to Eli’s great amusement. There was something with that action and role-play that stuck with me: he seemed to enjoy the power that came with being different, even for just a day. 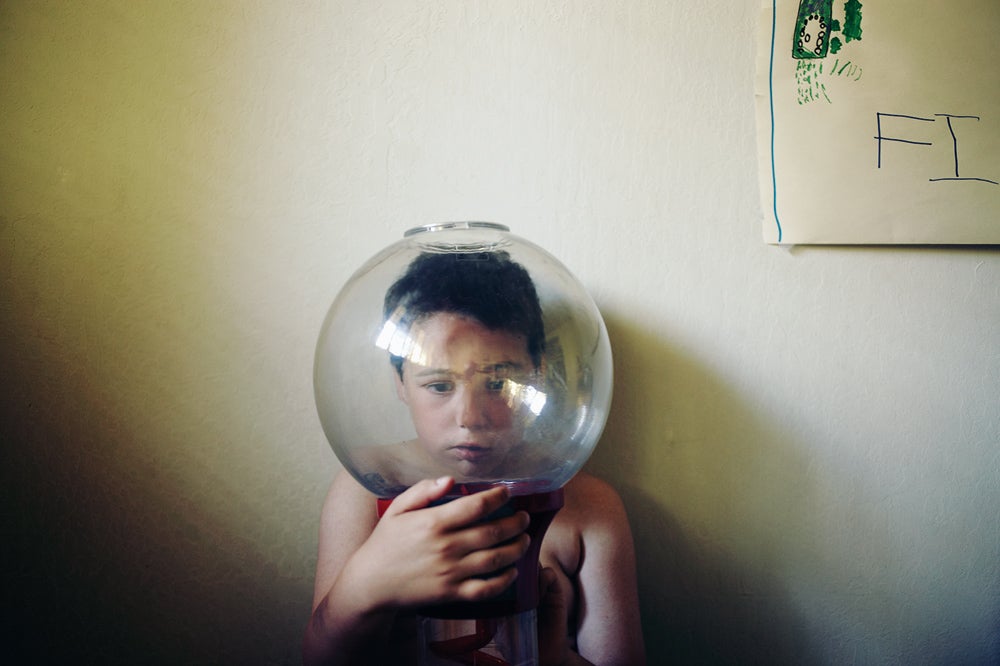 Always having an unending curious nature about all things mechanical, Eli here is exploring the workings of his gumball machine. 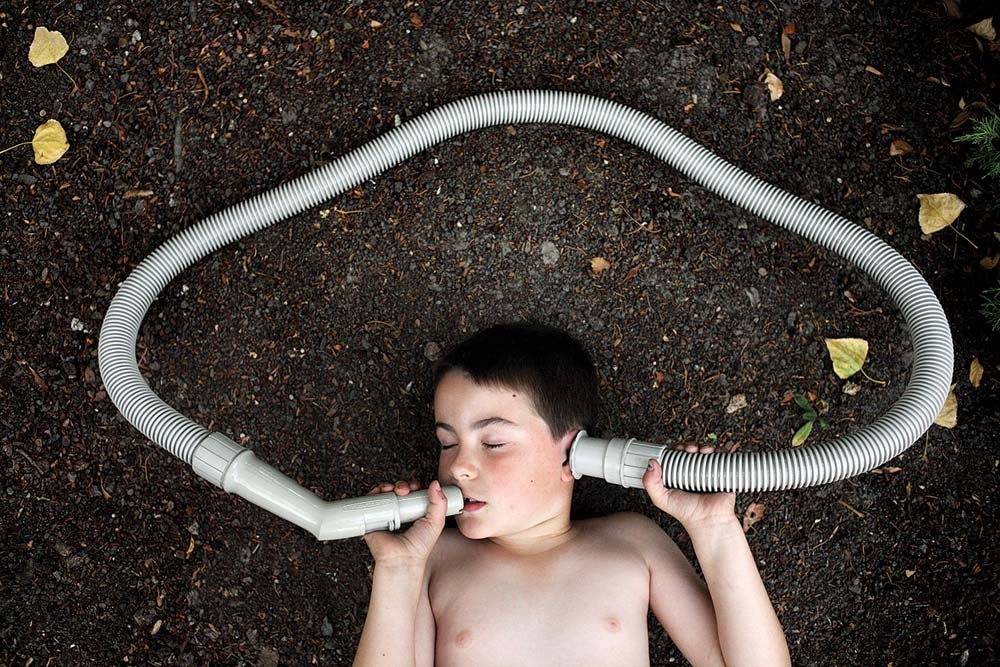 I had come home for the day and realized that Eli had discovered that he could blow into one end of the vacuum hose and hear the sounds and vibrations amplified thru the other end of the house. He was doing it over and over and over and finally we asked him to do it outside. It was summer, it was warm, and as I watched him doing it out in the land, amidst cement and trees and dirt and leaves, it started to look like a metaphor. A metaphor for what? Well, I don’t know, but it seemed to reference listening closely to yourself, speaking only so you can hear yourself, and the feeling of being totally at peace with that closed system you have created. We tried the shot in a variety of places, but this dark soil area surrounded him in a way that seemed totally fitting. 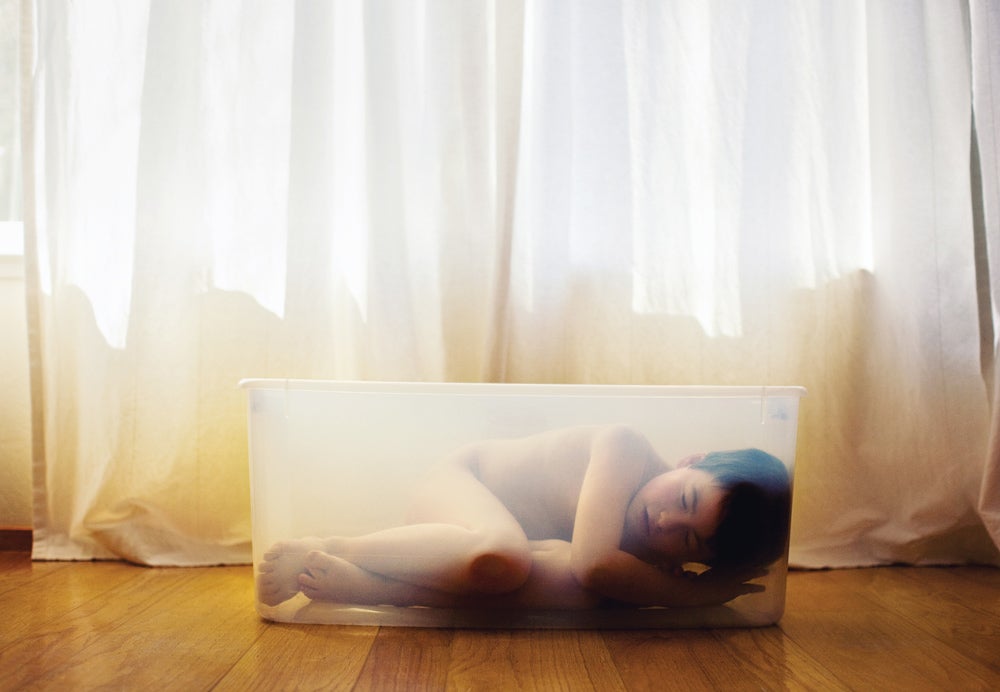 Elijah In A Fairy Tale

One evening Eli and his brother were playing in the living room. They had dumped all of the toys out of their plastic toy bin and laid them out on the floor. Eli got intrigued with the idea that he could fit his entire body into the plastic container – it contained him perfectly. We talked about making that photograph the next day when the sun was filling the room, thinking it would make a great shot. The following day I picked him and his brother up from school and had the container where I wanted it – in the beautiful light. His brother was watching TV behind us as Eli and I began making the photographs, thinking it would be like he was a baby, naked in the mom’s womb. He got in and starting adjusting his hands, his toes, his legs, his head with tiny movements. He’d pop out, come over to the digital camera, look at the shots, and rework his pose. The shoot lasted roughly 10 minutes, and then we made lunch. 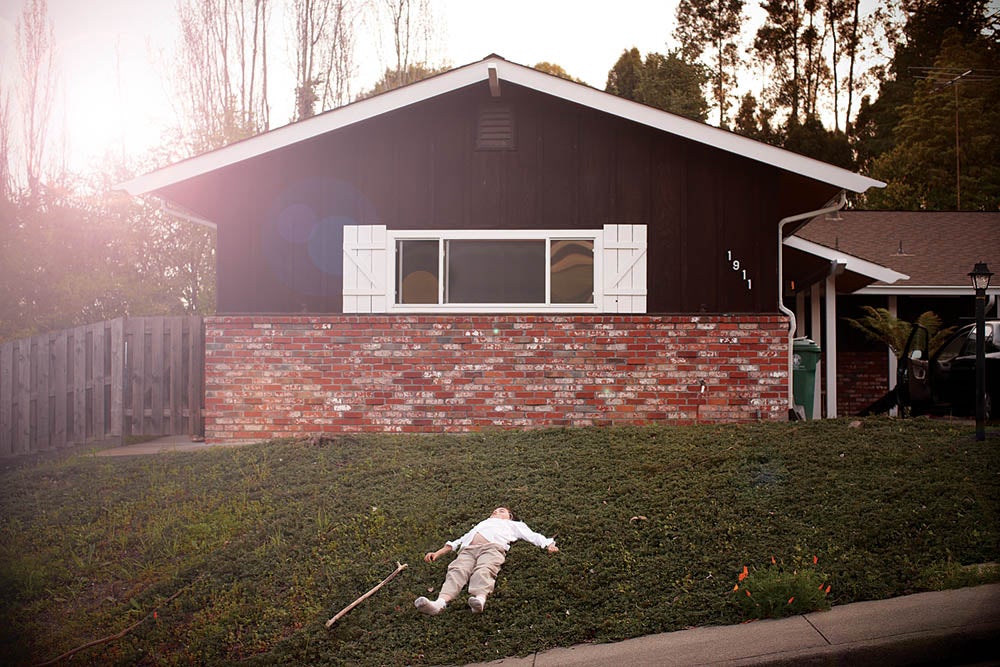 Eli loves to have his senses stimulated. When the iPod came into his hands his favored state was one depicted here: back down to the scratchy ground, face up to the sky, and music filling his ears. Striking to view at sunset, or even mid day for that matter. We made this photograph one pretty fall evening when he was eight…the last image for the project.
Features
Autism
How to
My Project
Share
Shooting