How To: Mix Light Sources to Warm Up an Interior Photo 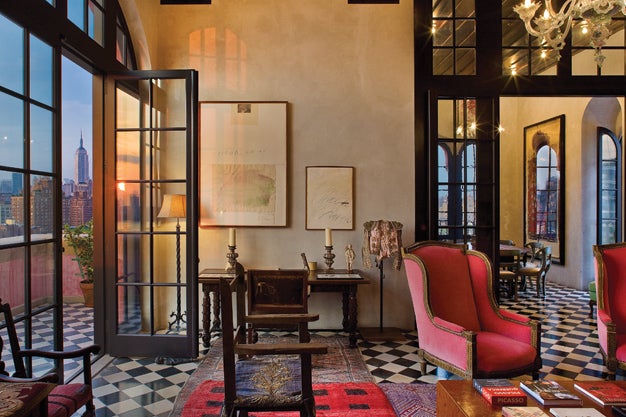 Some photographers go to extremes to avoid using light sources with opposing color temperatures (mixed light). For interiors, like those that New York-based pro Evan Joseph specializes in, it’s common for shooters to switch out floor- and table-lamp bulbs, or even tape large and expensive color-balancing gels over windows in order to wrestle all the light in a given scene to a common color temperature or Kelvin number.

Not Joseph. “I’ve spent most of my career shooting under mixed light,” he says.“I find it energizing.”

For this photo of artist Julian Schnabel’s palazzo-style Green-wich Village triplex, Joseph art-fully played up the mixed light to highlight the sunny feel of the room and its Italianate stylings. To emphasize this warmth, he used tungsten studio hotlights and a tungsten-gelled strobe, while composing to include as many windows and open doors as possible. The strategy resulted in repeated patches of cool blue sky that worked to set off and emphasize the interior’s sunny warmth even more.

Other forms of lighting magic at work here:

Balanced light intensities. To capture this scene with full detail in both interior and exterior views, Joseph set up his interior lights, and then waited until the exterior light levels perfectly matched the interior’s. “I had about an 8-minute window to get my shot,” he remembers.

Finessing the fill. “My intent was to make the shot seem to be lit only by ambient sources. Ironically, it takes a lot of fill lighting to mimic the look of ambient light.” says Joseph. To achieve the desired effect, he set up lights in both the living room in the foreground and the dining room in the distance. He then set each to a relatively high output that overpowered the ambient lighting. Finally, shooting tethered, he studied previews of the lighting on his laptop computer as he incrementally lowered light output until the presence of the artificial fill lighting was practically undetectable.

New York architectural photographer Evan Joseph had three goals in making this image of a famous Manhattan penthouse. All three required careful attention to lighting. He wanted to showcase the Empire State Building view, capture the rays of the setting sun as they struck the living room wall, and play up the rooms’ tawny, Tuscan-esque glow. He started by lighting the living room with a warm-toned Lowel Tota-light (A) which he aimed into the chamber’s upper corner to open up shadows. The one light wasn’t enough, so he added an equally warm Lowel Omni-light (B), which he placed further into the room, softening its output with a Westcott Scrim Jim diffuser (C). He then lit the distant dining room by bouncing an orange-gelled Dynalite Uni400JRg strobe (D) off one of its walls. Finally, shooting tethered to a laptop (E), he shot tests and studied the results on its screen as an assistant changed strobe and tungsten output until interior and exterior lighting were in perfect harmony.