You don't need underwater housing gear to capture the creatures of the sea. 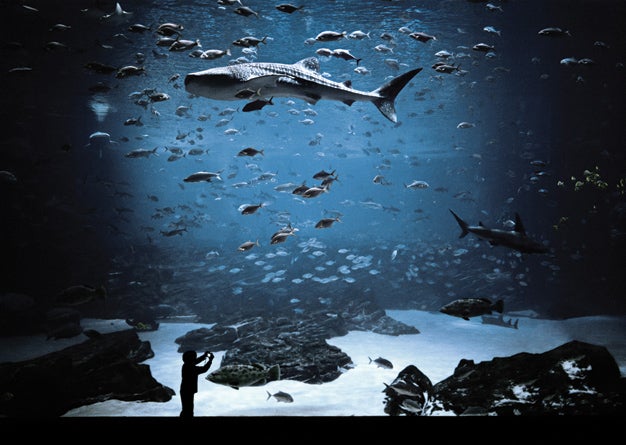 The images that comprise this composite were all exposed for 1/60 sec at f/6.8 on Kodak Portra 400, metered at ISO 200. Kyle Ford
SHARE

Shooting in a massive public aquarium may be your only opportunity to net a sea creature as magnificent as Kyle Ford’s whale shark, above. The project will be fun, if fraught with challenges.

The good news? Ford, a fine-art shooter and photography professor at Skidmore College in Saratoga Springs, NY, has catalogued a set of techniques that makes shooting in large aquariums doable. Here we offer a handful of his best.

Scout the aquarium. The day before you shoot, visit the aquarium and decide which scenes to capture. Determine where to set your tripod and what equipment to bring. Gauge visitor traffic and determine the best shooting times.

Set up your rig. On the day of your shoot, set up your DSLR and tripod. Focus, then check it by zooming into a test image on the LCD. When the scene is adequately sharp, lock focus by switching to Manual Focus. Make sure the MF ring doesn’t shift as you shoot.

Meter and set exposure. Ford recommends spot-metering the darkest subject area for which you want detail and then closing down two stops. Shoot in RAW at the lowest ISO that will allow a shutter speed no slower than 1/60 sec. If you intend to combine images, use identical exposures for each.

Get their best sides. Shoot when the fish are close to the glass and their body language is colorful and indicative of the species. “It’s a bit like hunting,” says Ford. “I wait for a series of decisive moments. It took three hours to make the 10 images that I combined for this shot.”

Fine-tune in post. Adjust sharpness, contrast, and color balance, and clean up debris and bubbles. Making a realistic-looking composite image takes a lot of practice and patience to build your skills. “It’s a meticulous process that actually feels a lot like painting,” says Ford.