The modern masters of black and white landscape photography 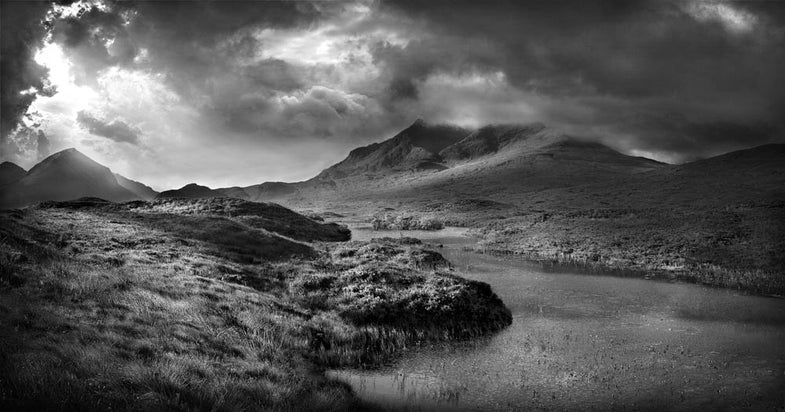 Chris Clor caught the photography bug at age 12 when his grandmother gave him an old Kodak Instamatic, and he began darkroom work soon after. While working in a portrait studio, he studied photography at a community college. He freelanced as an advertising shooter in the Detroit area and is now based in London. See more at www.clorimages.com. Chris Clor
SHARE

When we set out to find modern masters of the b&w landscape, we were astonished at the quality and variety of monochrome scenics being made today. Three artists tell us why digital tools have both transformed b&w and kept it thriving. One started as an audio design engineer, another as a photojournalist, and another as a commercial shooter. All of them were drawn to creating landscapes in black and white, and while all three can be said to work in a “classical” style, each has a distinct character to their images. Staying with Film The sole film shooter of our trio of monochromists, David Fokos might be considered a traditionalist’s traditionalist, particularly given his camera gear: a vintage Korona 8×10 view camera, plus one—and only one—lens, a 210mm f/5.6 Rodenstock Apo-Sironar-S. (On 8×10, the lens is the equivalent of about 28mm in 35mm full-frame terms.) He uses Kodak Tri-X Pan sheet film. But after developing the film, Fokos goes digital. If a negative looks promising, he scans it at very high resolution (the grayscale image file is—hold your breath—800MB) and sets to work on it in Adobe Photoshop. He often spends more than 100 hours on an image—and sometimes ends up discarding it anyway. Why not capture digitally? A major reason is that Fokos prints big—sometimes up to 7½ feet wide. “And 8×10 film gives me the resolution they require,” he says. “It’s only been within the last couple of years that digital capture has been able to rival this.” Fokos also notes that the reciprocity failure (the tendency of film to be underexposed at long exposure times) of Tri-X helps keep highlights from blowing out during such long exposures—sometimes as long as an hour.

Which brings us to the David Fokos look. “For scenes that contain a lot of motion, my exposures range from 20 seconds to 60 minutes,” he says. “This process eliminates what I have termed visual noise—all the short-term temporal events, things that are moving, that can distract us from focusing on the underlying fundamental forms. In a way, it is like peeling back a page to reveal a world that, while very real, is not experienced visually.”

The first image in the accompanying gallery, of Shark Tooth Cliff on Martha’s Vineyard, MA, was taken at about 90 seconds. At that duration, Fokos realized that the moon would show motion blur. So he took a fast exposure, too, and composited. He also adjusted local contrast and burned in the top and bottom.

Fokos’ other image in the gallery, “Eight Rocks and a Stone,” was made on Lucy Vincent Beach on Martha’s Vineyard. Captured at less than a second at f/45 or f/64, it is one of Fokos’ few images that stops motion. He says he wanted “to make an archetypical image that represents my summer spent walking on that beach.”

Digital at Step One

While Chuck Kimmerle’s compositions evoke the last century’s landscape masters (he cites Edward Weston and Fay Godwin) he believes that digital is a different aesthetic from film. “Digital capture has a different look and feel than does film—not better, not worse—and I feel those differences should be celebrated and used to advantage,” he says. “I would never try to make one look like the other. If I really wanted or needed a Tri-X look, I would shoot Tri-X film.”

Kimmerle shoots with a Nikon D3x, and his lenses include the Nikon 24mm, 45mm, and 85mm PC-E for their tilt and shift controls. For the photo “Sage Fence, Dead Horse Road, WY,” in our gallery, he used a 24–70mm f/2.8 AF-S Nikkor to make the exposure at 1/4 sec at f/8, ISO 100. “This image is a good example of right place at the right time,” he says. “The sagebrush is located along a fence line I had driven past half a dozen times, never noticing anything special. Then, after a day of looking for photographs, I was heading towards home and, shortly after sundown, literally saw it in a new light. The soft, directional, post-sunset light directly at my back made the branches glow, as if lit from within.”

As do most serious digital B&W shooters, he captures in RAW and converts later. In terms of “Sage Fence, Dead Horse Road, WY,” Kimmerle felt that the image looked too sharp and harsh. So he added a blurred layer in Photoshop, a technique sometimes called the Orton Effect (after Michael Orton, who pioneered the technique using slide sandwiches).

Kimmerle, who usually confines his edits to dodging and burning, notes that this was an unusual level of manipulation. “Working digitally offers far greater control and many more options for interpretation than can be found in a standard darkroom, especially for black-and-white work,” he says. “Sadly, many people fall victim to the traps of the power of post-processing. They don’t know when or how to hold back, to be subtle. They do too much because they can, relying on digital tricks and gimmicks that mask an image rather than enhance it.”

Kimmerle makes landscape images exclusively in black-and-white, he says, for two reasons. “The first is that I am far more interested in an object’s form and texture than I am its color,” he says. “Those traits are more powerful, more emotional, than an object’s tint and hue. The other reason is that I am a firm believer that creative photography is a two-step process: the creation of the image, and the presentation of the print. Or, to quote Ansel Adams, ‘The negative is the score, and the print the performance.’”

To peruse the website of Chris Clor, you might get the idea that he’s two different photographers. His commercial work in color for corporate clients tends toward wildly imaginative (some might say over-the-top) composites clearly not meant to represent reality. His black-and-white landscapes, such as his photograph of the Isle of Skye, are highly classical, even austere. “Since much of the black-and-white subject matter I shoot is landscape or cityscape, I have adopted a more straightforward approach to the photography, prefering almost no manipulation,” he tells us. “Something about black-and-white demands a bit more photographic realism, since at its core it is already an abstraction—we see in color.”

Clor is currently using very different gear. “I prefer my Sony NEX-7 paired with a bucketful of old Olympus OM lenses I own from my very first real camera, an Olympus OM-1,” he says. “These are lenses that are around 30 years old, and in my book, outperform the modern lenses.”

Our monochrome masters agree: to hone your b&w skills, just do it. A lot. “You need to put the hours and miles in,” Clor says. “I would suggest planning a photographic excursion to a place that interests you—not a vacation with the kids where you work in some shooting, but a trip devoted to photography.”

“To become better at working in black-and-white, I think it is important to immerse yourself in it completely, training yourself to see the world as it looks in compositions of black, white and gray,” Fokos says. He suggests capturing images simultaneously in RAW and monochrome JPEG to view the image on the LCD in b&w.