How To: Master the “Decisive Moment”

Good photos come to those who wait—and watch 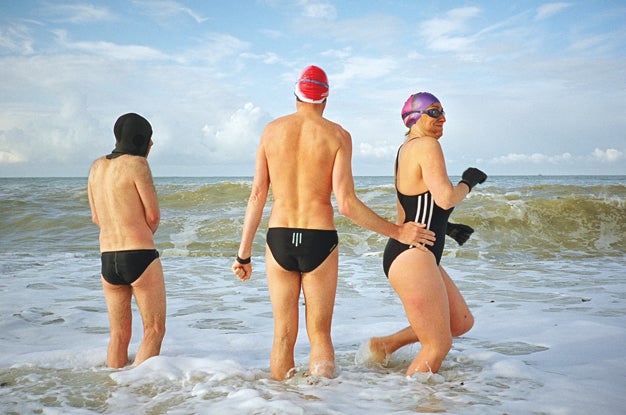 Henri Cartier-Bresson pop-ularized the “decisive moment,” and his style of 35mm candid photography owes a lot to anti- cipation and timing, not to men-tion a dab of good luck.

Fortune certainly paid a visit to photographer Kevin Meredith one cold day in May a few years ago at Brighton Beach in England. As he prepared to go for a swim with some of his close friends, this implacable shooter sensed a quiet moment coming together.

It was 7:30 in the morning, and the warm sunlight contrasted sharply with the cold water. “Brighton Beach has a steep drop-off, and you can get knocked over by its waves,” Meredith says. “My intrepid friends stood in a line waiting, and, when a gap appeared between the waves, they all stepped into the surf together.”

As a large wave formed and began to approach, he raised his old Contax T2 compact film camera to his eye, anticipating the subtle tentativeness just before his friends dove in. “Sue was facing the same direction as the boys, and I was waiting to get the three figures looking out to sea,” Meredith says.

As luck would have it, he didn’t catch the moment he had prepared for. And because you can’t chimp film (he was using Agfa Ultra 100), Meredith didn’t know he’d missed his shot until the resulting prints returned from his photo lab.

“It’s one of those fluke images,” he says. “As I began to press the shutter button, Sue got cold feet (literally) and turned as if to say, ‘Oh, blimey, I’m not getting into that!'”

For Meredith, the photo comes together in his subjects’ seemingly choreographed body language, from the cold arms and clenched fist on the left side to the reassuring hand on the hip and the twist of the body on the right.

Meredith now ranks this photograph as one of his all-time favorites, although he admits it’s a “photographer’s photo.” (Maybe that’s why we liked it so much.)

His friends? They were less impressed. “They’re like, ‘Well, you can’t even see my face!'” he laughs.