Tips For Better Reflections In Your Photography

Take control of your reflections for more dramatic photos 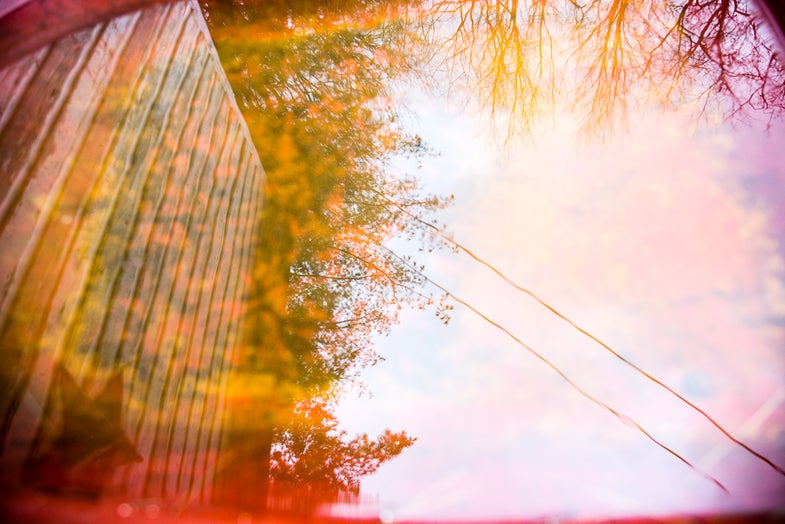 Reflections are tricky things. Sometimes they ruin our portraits when they show up on a subject’s glasses. Then, they go and turn a typical landscape scene into something surreal and beautiful. In this article, I’m we will focus on the love aspect of our love-hate relationship with reflections. So, here are some tips for making the most of them.

Get a polarizing filter

A reflection can be an interesting element in a photo, but it can also be a distraction. A polarizing filter can help control it a bit. The image above was shot without a filter. Notice the heavy reflection. The image below, however, was shot with a cicular polarizing filter. The circular polarizer is one of those filter you can’t really replace with Photoshop. It actually helps control the amount of reflection in a scene (among other things). Depending on how much you turn the filter, you can actually control the amount of reflection visible in a scene. It’s a tool you should have in your bag pretty much at all times.

Shiny objects and camera flashes rarely mix well together. In fact, high-end product photographers spend insane amounts of time and effort getting reflections to look just right on things like jewelry and watches. It’s an art form in itself. So, most of the time, your best bet is likely going to be natural light. If you do have to use flash, try using a the biggest light source you can find to throw even light on the scene and keep the light itself out of the reflection if possible so you don’t get a big hot-spot in your image.

If there’s a face in the photo, it should probably be in focus**

The human brain is naturally attracted to looking at pictures of human faces. When you’re eye gets to the face, it likes to see it in focus, even if it’s not the subject of the photo. It’s not a hard and fast rule, but it’s something viewers will notice, so if you’re going to throw blur on that face, you need to have a good reason for doing so. For instance, maybe a wedding shooter wants to show off a the gown while the bride looks in the mirror. Will it work? Sometimes. But, it’s more of a challenge to pry the viewers eye away from the face and onto the primary subject.

Reflections can be unpredictable, even if you’re using a polarizing filter, so you have to give yourself a little more leeway when it comes to small, blown out highlights or slightly lost shadow details. Often, reflections can have a surreal feel about them in the first place, so slight technical imperfections won’t be as glaring. Worry about the overall tone and look of the image rather than ruining an entire photo to keep from one small blow-out.

Consider your stance on symmetry

Composition is always crucial, but with reflection photography, symmetry plays a huge role in the success of an image. That’s not to say an image needs to be totally symmetrical. In fact, sometimes it’s a lack of symmetry that makes a photo work. This is also a great time to try cropping the frame right down the middle, something normally discouraged by that old stickler, the rule of thirds. We suggest you try both. Shooting a skyline on the water? Split the frame right down the middle with your first couple shots, then move the horizon to the very top and very bottom of the image. See which one most appeals to your eye.

Use caution when including words

Like with faces, our eyes are often drawn to words in a photograph. When we see words, we read them. It’s what we’ve been doing our entire lives. But, with reflection photography, the words can often be a mirror image, making them difficult to read. It will immediately give the photo a surreal or weird feeling, which may or may not be what you’re looking for. You can even flip the image later to make the reflection read correctly, which often looks even weirder.

Depending on the surface you’re using and the lighting situation, reflections may not have quite as much contrast and sharpneass as you’d like. If you’re using Adobe Photoshop Lightroom 4, try pushing up the contrast slider a bit in order to add some definition. If your highlights start to blow out, you can rope them back in by slightly reducing the highlights slider. The clarity slider is also good for defining the edges of your reflection by upping the midtone contrast. Just don’t over do it.

Look for texture to add intrigue

For a pristine reflection, you can’t beat something really flat. Calm water or glass are the old standbys. But, finding something with a little texture can add contrast and drama. A lumpy piece of metal might not be as flattering as a flat, shiny piece, but it might be more interesting. Also, you can mix rough textures with smooth in the same image to add even more drama. Shoot a reflection in a puddle, but try including some of the surrounding pavement to frame the reflected scene. You can also drop a small rock or into the water to create ripples and see how that changes the resulting image.

Use a tilt-shift lens to totally kill your own reflection

OK, so this one requires some specialized gear, but if you have a tilt-shift lens you can actually take a straight-on photo of a mirror without your reflection in it. Get more in-depth details here.

ENTER OUR REFLECTIONS PHOTO CONTEST FOR A CHANCE TO WIN A COPY OF ADOBE LIGHTROOM 4 AND A PHOTO BOOK.