Anything for the best angle 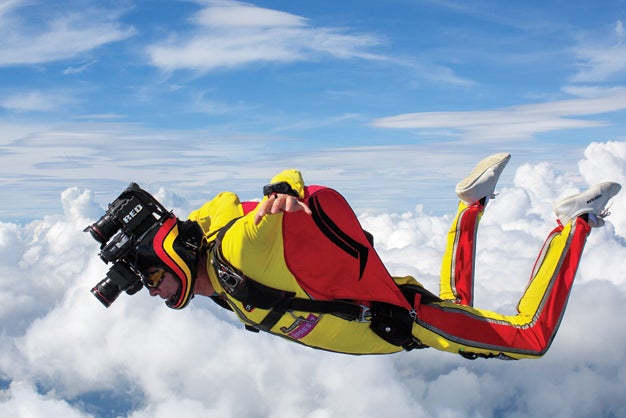 What came first: flying or shooting?
I started working with photography when I was 14, and I first started skydiving on my 19th birthday. I thought my first jump would be a one-time thing, but once I’d landed, I knew this was going to be part of my life. The aerial perspectives are a photographer’s dream, so I knew I wanted to shoot it. By my 24th jump, I had a camera mounted to my helmet.

What kind of work have you done professionally since then?
I’ve done photography on editorial shoots for various clients. I mainly do cinematography and have shot for feature films, television productions, and international sporting events such as the Olympics. I’ve also produced several skydiving features.

What kind of gear do you need?
It varies, depending on the shoot, but on most jumps I’ll have four cameras helmet-mounted. One is a video camera for playback; one is a movie camera [RED or 35mm film], and I’ll have two still cameras. These have ranged from a Hasselblad 6×6 to a Canon EOS 5D Mark III, with wide-angle and fisheye lenses. The heaviest camera I’ve had mounted was a 32-pound film camera on the set of Cliffhanger. I use custom cable releases, with a switch that lets me fire the trigger with my tongue.

How much freedom do you have to compose your shots?
Speed has a lot to do with it. If someone jumps before me, or if I’m capturing a team, I’ll accelerate to catch up with them, or decelerate if I’m the one who jumps first. But once I’m there, I respond to instant information: what the people are doing, where the clouds are positioned, and how it fits into three-dimensional space.

What’s tricky about shooting in the air?
You only have one minute to shoot. You have to anticipate lighting, cloud cover, and make sure that your settings are intact before jumping. But when you’re actually shooting, you almost have to live in the future to anticipate shots. If someone’s coming at you from 20 feet away, you’ll want to shoot at a 5-fps burst rate. You get a better shot if you’re prepared and wait until the moment is happening. I go into a dream world, and don’t know what I’ve captured until I’ve landed.

How do you deal with the fear?
You learn to embrace it. You accept the fact that you might die but don’t want to, and you make sure to have both your survival and camera gear prepared for the moment. Once I’m at the ready state, waiting for a jump with people lined up behind me, my mind clears out and I go into automatic.

What are things you have to do in the air to get the shot?
Positioning and having spacial proximity to your subject is key. I’ll go on shoots where I jump first, and I’m accelerating faster than my subject, or I’ll be photographing group jumps with faster acceleration, and have to adjust my speed to fly up or down.

What was your craziest experience in the air?
It feels crazy right before you shoot: A green light goes on, you’re hanging outside a plane watching other aircraft get into formation, and the next minute you’re dropping though gravity in a camera-focused dream state. But one highlight was the opening ceremony of the Summer Olympics in Seoul, 1988. There was a lot of danger in landing at the stadium, so training was a long road. But on the day it happened, everything aligned itself to happen perfectly. I was up in the air, shooting stills and also live transmission to an international audience. The world was watching what I captured as I dropped through free fall: That was a crazy experience.

Norman Kent has performed and photographed close to 23,000 skydiving jumps. The 56-year-old credits this with shaping his other photo work: “It’s like having extra muscle or attention span when you’re on the ground,” Kent says. See more work at PopPhoto.com/Kent and normankent.com.