For his latest film, Winged Planet, this filmmaker used creative camera hacks to get closer to birds than ever before 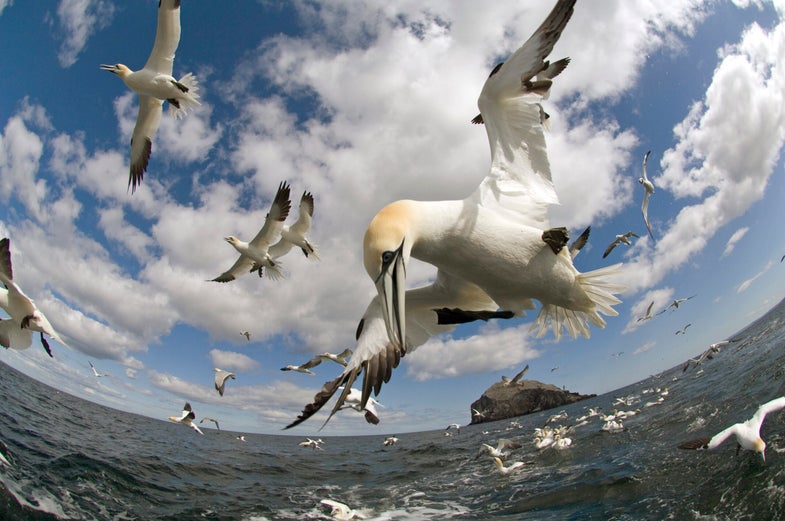 Filmmaker John Downer is like the MacGuyver of nature documentaries. Using clever camera disguises, he’s able to get a camera where no photographer would ever be able to shoot. For his latest project, Winged Planet, which airs on Discovery Channel October 6th, he got an up close look at wild birds using a whole arsenal of clever camera hacks. Yes, that includes mounting cameras directly to the birds themselves.

How long did it take to shoot all the footage for Winged Planet?

it was four years in all. At the beginning, we didn’t really have the technology to complete it. But, the technology has been growing as we’ve been filming.

One of the cameras you used was mounted to a wooden replica of a vulture. Can you tell us a bit about how that came to be?

The more similar you can make your device to the bird in question, the more they’re going to accept it. We based it on a model glider, but we were still left with this tail that sticks up. We had to work out ways to get rid of that and replace it with a bird’s tail. It’s a very different craft to fly than a normal glider, but, they accepted like it was one of them. The biggest problem was landing. We didn’t have the feet of a vulture. We could launch it off a cliff, but often there wasn’t a runway for it to land. It’s a worry sending it off a cliff not knowing how you’re going to get it back.

It looked like a standard DSLR strapped to the vulture model. Did you do any customizing?

It was a DSLR actually, but we had to custom build the mount. It had to be incredibly light to function. We had to have a video sent back from the camera as well as recording on board. The pan and tilt could be remotely operated independently of the person flying the glider. The producer was doing that.

Watching the film, I noticed that you shoot a lot with wide angle lenses. This is usually the territory of big telephoto lenses. Is that just part of your style?

I always shoot like that. I want to be there. I want to take the audience there. To get that feeling you need wide angle lenses. The big challenge, then, is how you get those wide angle lenses next to the subject. If you can do that, you can give people the experience of being with the animal.

People in the past have said that birds are boring. Well, part of the reason is that a long lens has a distancing effect. You don’t feel involved with them. So, wherever possible, we were going to have our cameras in there among them. It’s not often done in natural history. It’s relatively easy to sit in a hide with a long lens. The results can be spellbinding, but they’re not involving.

I’m pleased to see an increasing number of still photographers starting to go that route. You want to capture the animal in its surroundings rather than separated from its surroundings.

What other animals have you been able to sneak up on using creative cameras?

I made a film called Lions: Spy In the Den about 12 years ago. We had a camera that was basically a remote-controlled rock that could be trundled in among the lions. It was on wheels and had a rotating turret. It could drive right up to the lions. We shot a lot of that film from that perspective. I’ve made quite a few films like that and they all have this idea of spy cameras that can get wide angle close-ups among the animals.

A rock is one thing, but how do you strap a camera to a bird?

What we had to do was strip down the highest-quality, but smallest HD camera available. We had to engineer it so it was basically a circuit board, a chip, a lens, and batteries. We had to make sure it was as light as possible, but we also needed it to record slow-motion. We wanted to film 50 fps rather than 25 which is normal [The standard in the US is 30 or 60 fps]. So, we had to make the cameras and the mounts so the bird could fly naturally and feel comfortable.

It also needed an extremely wide lens. You don’t to see just the bird’s perspective, you want to see the bird in the frame as well. You’re getting these fantastic wrap-around views that include the arch of the wing. It was quite a challenge. For the first two years we didn’t even attempt it. The technology was getting better and better so we decided to leave it for the last two years of shooting, which ended up being a good decision on our part.

About 20 years ago, all we had was super 8 cameras. We had one stripped down to basically a motor to turn a bootlace piece of film, a lens and, a battery. We managed to capture shots from the back of a bird for the first time. At that time it was amazing. It was grainy and certainly wouldn’t stand up to a wide screen TV [laughs].

How much filming did you have to get in order to come up with the final cut?

For every minute of film on screen we shot 30 hours. We would shoot a lot of material to capture the perfect moment. We were also shooting from lots of different angles on the same event. The remote cameras were either triggered by the birds themselves or they would just be running for a really long time.

Was there one shot that was particularly difficult to get?

With incredible pieces of natural behavior, no matter how much technology you’ve got, you still have to wait and wait for it to actually happen. We’d heard about these baboons that had turned into hunters and they were hunting flamingos. It was an incredible difficult sequence to capture. It took 100 days before we managed to get the shots. They ended up being unbelievably spectacular. You still have to put in the time. It’s a matter of real planning. It can take a huge amount of time, but you know you can get it at the end.

Were there any shots you wanted for the film but were unable to get?

I think you kinda forget them [laughs]. If you don’t get it, you forget it. In the end so much more delivers beyond what you originally expected and I think that’s what’s so satisfying about it. You continually get these incredible things you never thought you were going to get. The lift you get from capturing an extraordinary behavior makes you forget what you didn’t get. Otherwise, it’s a life of regret [laughts].

Do you destroy a lot of cameras trying to in close like that?

We always have to build in a huge attrition rate on the cameras. If you’re afraid to put a camera in the firing line, then you won’t get anything. We do our best to protect them, but a large percentage don’t make it to the end of the production. The price of kit is coming down, though, so you can put a cheaper in the firing line than you used to. You used to have to risk a $50,000 camera. It’s not quite like that anymore.

Has that encouraged you to take more risks?

I’ve always taken a lot of risks. It’s nice to know that the price of an accident isn’t quite so high.