You Can Do It: Shoot Dramatic Bubble Macro Photos 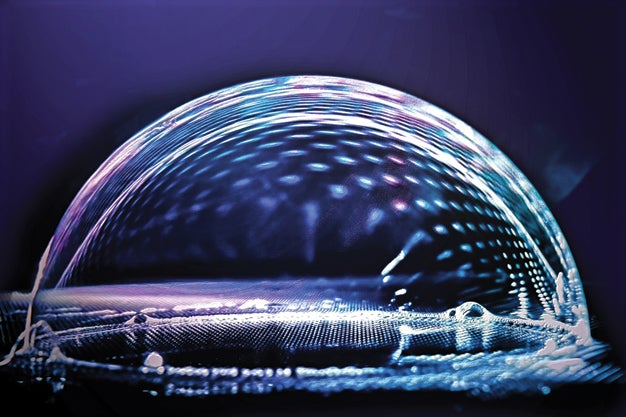 A self-described “accidental” civil engineer, Feryal “Faye” Berber has been translating visions from her mind’s eye into photographs ever since she got her Canon A-1 in 1983. The Ringoes, NJ, resident finds motivation in her curiosity rather than a paycheck. The experiment in effervescence shown here tested her eye, as well as her lighting skills.

Her subject did not require an engineering degree to make: She used a bottle of bubble-making solution, the kind that comes with a wand and geared to kids. With a couple of LED flashlights, some reflective surfaces, and plenty of trial-and-error, she captured this gorgeous purple-hued pattern reflected in and magnified by the bubble’s dome.

“I had to work quickly,” says Berber, who moonlights as a fine-art photographer. “The bubbles had a short lifespan.”

Berber began her experiment with a plain white board and dishwashing liquid, blowing bubbles with a plastic straw. Unsatisfied with the results, she gradually replaced materials until she ended up using a dimpled, aluminum knife case and a 22-inch reflector. Together, these reflected the only light sources, a pair of LED flashlights—one placed at about a 60-degree angle to the camera, the other at about 120 degrees—to great effect.

“I wish I had had five hands,” she laughs. “The stressful part was aiming the lights, blowing the bubble, and pressing the shutter before the bubble burst.”

The textured metal surface provided by the aluminum case reflected light up into the dome of the bubble, creating a field of tiny rainbow reflections. Berber posits that the back of a CD, a cheese grater, or even wrinkled aluminum foil, could substitute for the dimpled metal case.

While not every experiment bears fruitful results, Berber sees her failures as an important part of her photographic process. She says, “Sometimes I spend hours shooting and end up with nothing—except learning.”

After initial experiments with a flat white surface produced subpar results, Faye Berber settled on the dimpled metal case (A) from a Prima knife set. She positioned a 22-inch reflector disc (B) opposite her camera, a Canon EOS 40D with a 17–85mm f/4–5.6 Canon EF-S IS lens (C) mounted on a Velbon CX-586 tripod (D). Using a straw to blow bubbles with some Miracle Bubbles liquid soap (E), she experimented with two LED flashlights (F), aiming them at various angles until she was satisfied with the reflection pattern. The arrangement she settled on pointed each light almost directly at each other, but out of alignment and off axis to the camera enough to capture the reflections in the bubble while keeping the background dark. “First, the light hits the surface a little bit, and bounces back to the dome of the bubble,” she says. “That’s what creates the little rainbows.”