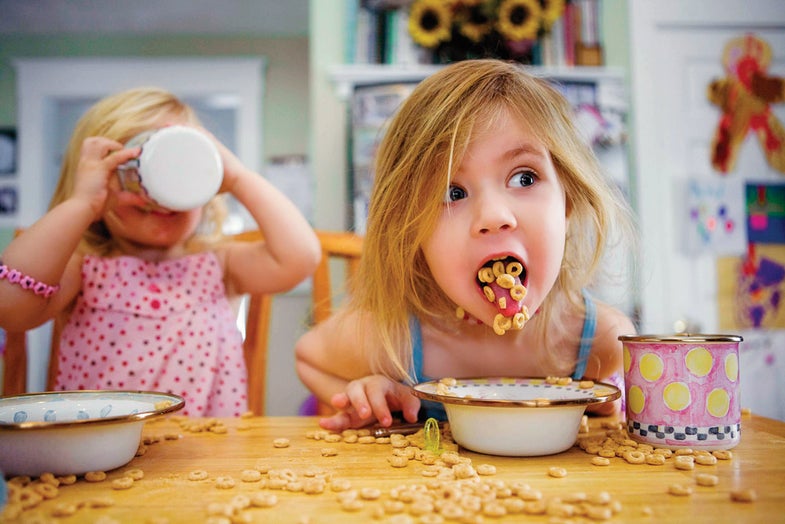 Plan your candids.
Barbara Peacock posed these sisters in front of a colorful background and coaxed them into silliness. She shot with a Canon EOS 5D and 24–70mm f/2.8L Canon EF lens; 1/125 sec at f/5, ISO 320. Barbara Peacock
SHARE

Many decisions go into shooting a single portrait. Often, as we chat with our subjects, we’re not even aware that we’re making choices about framing, subject distance and position, color palette, focal length, lighting, and other elements. But rather than rely on instinct alone, here are some ways to ensure you make the right decision.

1. Frame Them Up
More then any other tools at your disposal, composition and framing help you direct a viewer to appreciate something specfic about your subject. It could be a physical quality such as beauty, or a personal quality of character.

One crucial question: How tight should you frame a face? When Richard Brocken of the Netherlands (richardbrocken.com) made this portrait of his (then) 10-year-old daughter Eva, he wanted to focus attention on her beautiful eyes. Their gaze reflects a calm, Zen-like quality unusual in a child so young. So he moved in as close as possible with his Nikon D50 and 50mm f/1.8 Nikkor to capture a single eye and cheekbone.

“Because I’ve photographed my children all their lives, they’re very used to it,” says Brocken. He was able to move within 18 inches of the child, and she remained relaxed, composed, and unselfconscious.

“My first concern is always to focus on what’s important in a portrait, and here it was that eye,” he says. After some experimentation, he found that converting the image to black-and-white drew even more attention to this limpid window into the soul.

For subjects with whom you are not quite so intimate—or who feel less comfortable being photographed—you can use a telephoto lens to let you stand farther away, though you may need to crop for the exact framing.

For a less intimate view, move back for a half- or full-length portrait. This shifts the attention from your subject’s skin and facial expression, placing it onto the body, gesture, and background. (It also takes the pressure off your subject to appear fashion-magazine “perfect.”)

2. Depict the Surroundings
Environmental portraits, in which the nature of the background is almost as important as your human subject, can make a portraitist’s life easier.

Christopher Dibble, a Los Angeles-based photographer who made the male portrait shown here as part of a fashion spread (christopherdibble.com), specializes in finding simple yet evocative backgrounds for his pictures of actors and models.

“My eyes are constantly looking at locations and evaluating their potential as portrait backdrops,” he says. “Whenever I see a background with possibility, I take a photo with my cellphone and e-mail it to myself with the location and time of day. I’m looking for interesting light and the ability to control any clutter or distractions. There must obviously be room to shoot someone in the space, and the scale and proportions of the human body have to make sense within the larger scene.”

Once he finds a great background, Dibble uses his own lighting to bring out its character.

3. Light Your Way
Whether it’s a set up you create or the ambient one you’ve found, lighting—and shadows—can lend mood and presence to your subject, while drawing attention to (or deflecting it from) specific physical traits. The right light can make heavy people appear thinner, and carefully placed shadows can help conceal any number of perceived flaws that your subject may feel uncomfortable about.

“Don’t be afraid of shadows,” Dibble says. “I wanted to create some tension with the lighting in this cabin portrait, so I put an orange gel over the main light to create a warm glow, but I also made no attempt to fill in the shadows.” Almost completely black, they impart a mysterious, almost uncomfortable or threatening feel to the portrait, giving it the compelling, edgy quality that Dibble likes.

4. Working with Groups
Ironically, the best way to capture individual personalities may be to photograph them with others. Subjects who are particularly self-conscious and nervous whenever a camera comes out often relax when someone else is in the frame. These ancillary subjects can take the pressure off, offering a distraction that produces engaging facial expressions in an otherwise uncomfortable subject.

You don’t even have to leave the other person in the photo. When your goal is to photograph grandparents, for example, shoot them with a grandchild, framing the shot so the child can be cropped out later.

Barbara Peacock, a pro shooter (barbarapeacock.com) based in Westford, MA, who photographed the snacking sisters here, agrees that groups can be easier than individuals. “Siblings are great to shoot in pairs,” she says. “They have this symbiotic thing going that can work to a photographer’s advantage.”

Individuals in groups tend to quickly engage with each other, helping them to ignore the camera. With some pairings, capturing great facial expressions can be relatively easy.

5. Relaxing Your Subject
When Anne Makaske set about making this stunning black-and-white portrait of her grandmother, she knew her model would be uneasy. “To take her mind off the camera, I started by taking pictures of her home, of a house plant, testing the flash, and checking the camera,” she says. “When I started to take her picture, she had forgotten the camera and wasn’t aware that she was my actual subject.”

Based near Arnhem in the Netherlands, Makasker (annemakaske.com) stresses the importance of patience in relaxing her subjects. It’s only after they become accustomed to the camera, that they start to reveal their true character. It also allows you to capture natural gestures, rather than stiff poses.

“Making a portrait takes time,” she says. “Whenever you want to see a part of your subject’s soul reflected in your image, you need to invest time and learn what moves your model. Discover their characteristics, and try to bring these traits out.”{C}

How does she get such insight-ful images? “By watching very closely,” she says. “I try not to direct, because whenever I ask someone do something specific, they don’t really do what I want, and the result is often awkward. I’ve learned to trust that something will happen on its own. I watch to see how my subjects arrange themselves, who stands in front, or on the side, and who seems to dominate. Then I go under the black hood [of her 4×5-inch view camera] and wait to see what happens.”

Panas attributes her success to not being critical—and, yes, many subjects will often infer criticism if you start to direct them. “I want my subjects to feel good about themselves. If you direct too much, they get confused.”

Like Makaske, she finds that patience pays off. “I try to wait until I can relate to the subjects, before I start working in earnest. It usually happens when what they’re saying to each other begins to make sense to me,” she says. “It’s a very intuitive process, and one that’s very exciting.”

7. Wardrobe and Props
Often, clothing choices can make or break a portrait. It shouldn’t distract from your subject or clash with the background. “I ask my subjects to wear dark, muted colors—no patterns and no jewelry,” says Panas, who mainly shoots outside. “I like for the clothing colors to work with my backgrounds, which are mostly the greens and gray of nature. A white shirt wouldn’t work.”

She also likes to make sure the style of clothing in group portraits is roughly congruent from subject to subject, without actually matching. “If some subjects are casually dressed, and others more formally, it can [adversely] impact the overall image,” she says.

The two sisters in Barbara Peacock’s photo benefitted from her eye for color. Clean, strong hues in the clothing, props, and backgrounds all work to imply a sunny, child-friendly world. “The house belongs to a friend of mine,” Peacock says. “I was lucky there were many colorful backgrounds. My job was to make sure the kids were positioned so that I could utilize that color.”

So while both the clothes your subjects wear and the environment in which you photograph them should reflect their personalities, make sure they don’t fight each other. If they do, consider changing one—or both.