You Can Do It: Turn Your Aquarium into a Fish Photo Studio

Give your marine friends the Avedon treatment 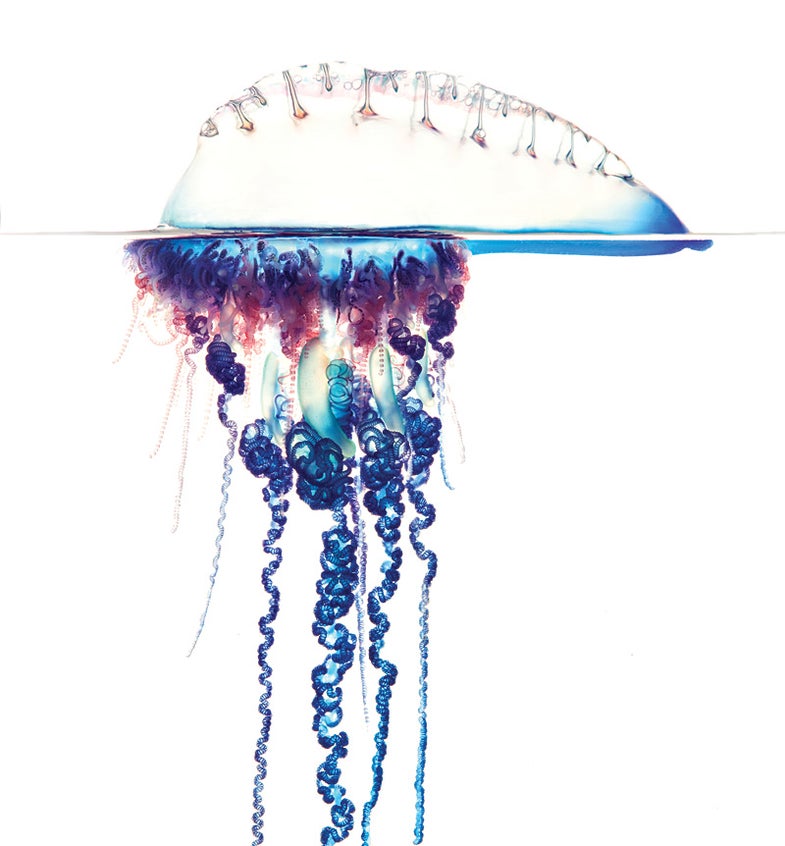 Miami Pro Paul Marcellini is no stranger to Pop Photo. Readers may remember his high-impact black-and-white wildlife photos. What you may not know is that Marcellini (www.paulmarcellini.com) is a contributor to an international nature portrait project called “Meet Your Neighbours.”

Using the talent of accomplished nature photographers from all over the world, the project (meetyourneighbours.net) presents commonplace—and usually backyard—wildlife and botany in rather uncommon portraits reminiscent of Richard Avedon. Marcellini’s project covers much of southern Florida, and has contributed amazing images of numerous plants, insects, snakes, alligators, turtles, and even undersea creatures­—all cleanly posed against bright white backgrounds.

For the Portuguese man-of-war shown here, Marcellini started by building a customized aquatic tank to hold and photograph such creatures. Made from panes of acrylic, three of its sides are white translucent panels through which he can pop shoe-mount flash units, essentially turning the tank into a water-filled softbox. He shoots the subject through the clear front pane.

If building your own fish tank seems daunting, buy an aquarium from any pet shop—a 5-gallon version should do—and line three of its sides with a white translucent material.

When the shooting starts, you will need an additional transparent acrylic or glass pane, freestanding within the tank. This will help you nudge your subject closer to the front. The reason: To give you as little water as possible between the front panel and the subject, assuring a sharply rendered specimen. As long as it is clear and scratch-free, this moveable pane will disappear when your flash units fire.

Another must? Clear water. “In the field, this can be tough to find,” says Marcellini. “I usually use a white T-shirt, doubled over, as a particulate filter when pouring seawater into the tank.”

In the field is exactly where this photograph was taken. Marcellini shot on Key Biscayne, an island just southeast of Miami. He netted the man-of-war on the beach where it had recently washed up. Then he carefully avoided its stinging tentacles, photographed it, and immediately returned it safely to the Atlantic Ocean.

No men-of-war near you? No problem. Marcellini uses the technique described here for all types of aquatic and semi-aquatic creatures such as small fish, frogs, and salamanders.

Follow Marcellini’s steps to turn your tank into a fish-friendly studio:

Step 1
Gather your gear. In addition to the tank, you will need a macro lens that puts ample distance between you and your subject. If too close, your rig will throw a shadow across the subject.

Step 2
Set up the tank. On location, fill the tank with local water, filtering it through a white T-shirt folded in two. Catch your subject and carefully introduce it into the tank. Let it accustom itself to its new surroundings while you continue setting up.

Step 3
Place your lights. You will need at least two accessory flash units on light stands: one placed immediately behind the tank and the other in front. Fire them wirelessly, if possible.

Step 4
Work out the exposure. Set your shutter to its maximum flash sync speed, use a low ISO, a small aperture for depth of field, and start with the flash units at full power. Find the rear flash exposure by lowering its power until it just barely blows out the translucent white background. Do the same for the front light: Lower its power until it lights the subject, without blowing out color or subject detail.

Final Step
Shoot the photo. Keep your camera parallel to the front glass to prevent distorted proportions. When you’ve finished, return your subject safely to the wild.