Tips From a Pro: Use Ambient Light to Make Your Photos More Dramatic 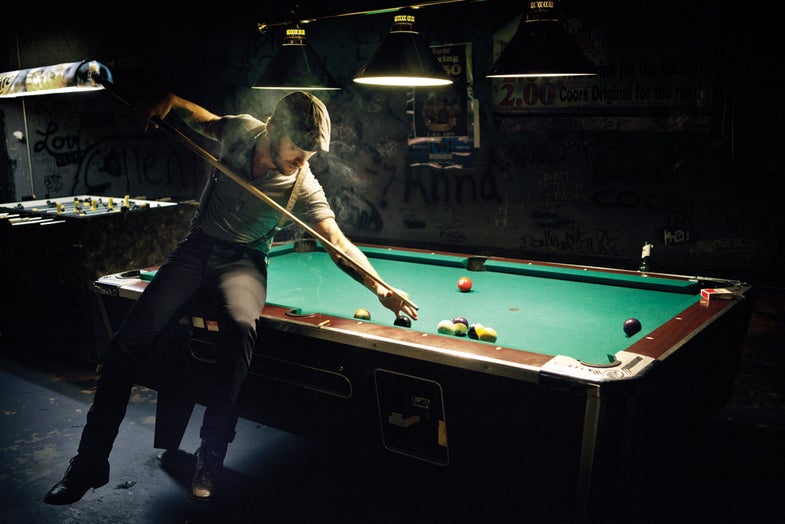 “I enjoy finding good light, instead of making it,” says Alabama-based pro Cary Norton. And most of us would agree.

The available-light strategy makes a lot of sense for many photographers for several reasons: Good light is usually easy to find, it comes in all varieties (flat, contrasty, bright, or dim), and, when you’re lucky enough to find it, costs nothing.

It sure worked for Norton’s portrait of rocker Matthew Mayfield, shown here. He took it during a daylong photo shoot in which he and Mayfield explored colorful locations in and around Birmingham, AL, including this local dive bar and its dramatically lit billiards table.

Norton could have rolled in with a dolly full of strobes, snoots, and umbrellas. But the bar’s own lighting had the right atmosphere to complement Mayfield’s music—anything more would have ruined the ambience.

As Norton puts it, “shooting straightforward suits Matthew’s style. The goal was to capture a gritty feeling, and adding lights would have undermined that.”

Of course, working with available light can be just as difficult as setting up your own—you will need to develop an eye for it. Many photographers would have walked right by this pool table, unaware that between the overhead fixtures and the table top—invisible against background shadows—three cones of potentially dramatic light waited to be exploited. (Norton saw the potential in these cones when Mayfield lit a cigarette and the smoke gave them shape.)

While shooting, Norton hit another common trap: conflicting color temperatures. The lights over the foreground pool table were tungsten incandescents, while those behind his subject were fluorescent tubes. He synched the two sources by first setting the capture white balance on his camera to 3200K, rendering the pool table lights near-white. Later, in Adobe Photoshop CS5, he used layers and layer masks to alter the color balance of the fluorescent-lit areas until they also appeared white.

“I like working with ambient light,” says Norton. “I tend to shoot from the hip and I like finding new ways to use different available light sources—it always turns into something rewarding.”

To lend his rock-singer subject Mathew Mayfield some Southern street cred, photographer Cary Norton brought the musician to a gritty Birmingham, AL, dive bar and eschewed adding his own lighting. Instead, he went with two available light sources: a fluorescent bank in the background (A) and three overhead incandscent bulbs in shades (B). The photographer handheld his Canon EOS 5D Mark II (C), and was able to capture sharp images, in part, because of the high ISO he set. He used image-editing software after the shoot to balance the conflicting color temperatures of the two different light sources.

Cary Norton’s editorial and fine-art photography is suffused with an edgy realism. For more, visit CaryNorton.com.