Tips from a Pro: The Right Lens Makes All the Difference 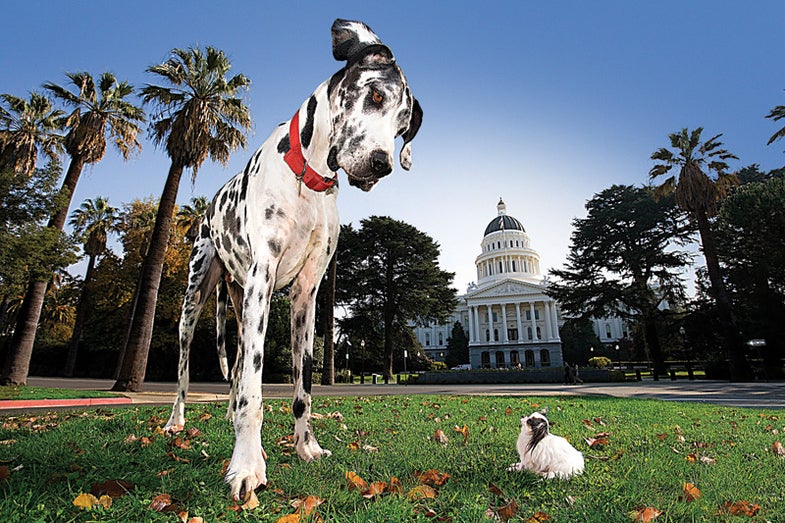 Superwide-angle lenses practically force you to create wacky images, simply by letting you cram so many elements into the picture. It can be a blast to use them to distort perspective. But there are times when superwides are absolutely the right tool for the job. London-based photographer Richard Bradbury turned immediately to his Canon EF 17–40mm f/4L when the Guinness Book of World Records called on him to depict both the world’s largest dog, Gibson the Great Dane, and the world’s smallest, Boo Boo the Chihuahua, in the same frame.

Because both record holders were American dogs, Bradbury wanted the meeting place to be iconically American in nature. He considered the Grand Canyon, New York City, and Washington D.C., among other venues. “We liked the White House because it’s serious, and we quite liked the idea of a serious location for such a fun record,” he says.

However, the real White House would have been impractical, given the potential crowds and other complications. The next best venue? The “White House” state capitol building in Sacramento, CA.

Although the shoot took place outside under natural sunlight, Bradbury used a three-light setup. He placed a softbox on a boom overhead and above the camera, with two backlights coming in from either side at about 45 degrees. The softbox was about five feet off the ground and aimed almost straight down to provide a soft frontlight and catchlight in the dogs’ eyes.

The two dogs were brought in once everything was ready, their respective owners directing them into position. Even though Bradbury only needed one shot, the session took almost two hours.

“When shooting wide-angle in close, the slightest movement from the dogs can change the perspective quite considerably,” Bradbury says. “My shots frame to frame are quite different from each other, but you’ve got to respond to [your subjects]. You keep repositioning and eventually you get enough shots to make it right. There are a lot of throw-outs with animal photos.”

As for the dogs, they had no notion of their relative sizes.”Boo Boo clearly thought she was six feet tall,” Bradbury says. “She wasn’t taking any messing around from Gibson. She held her ground and just looked up as if to say, ‘If you want to come down here, buddy, you’re in for trouble.’”