Tips From a Pro: Infrared Photography

Professional photographer Arthur Drooker shares the tips and tenchniques he employed in his newest book, 'Lost Worlds: Ruins in the Americas' 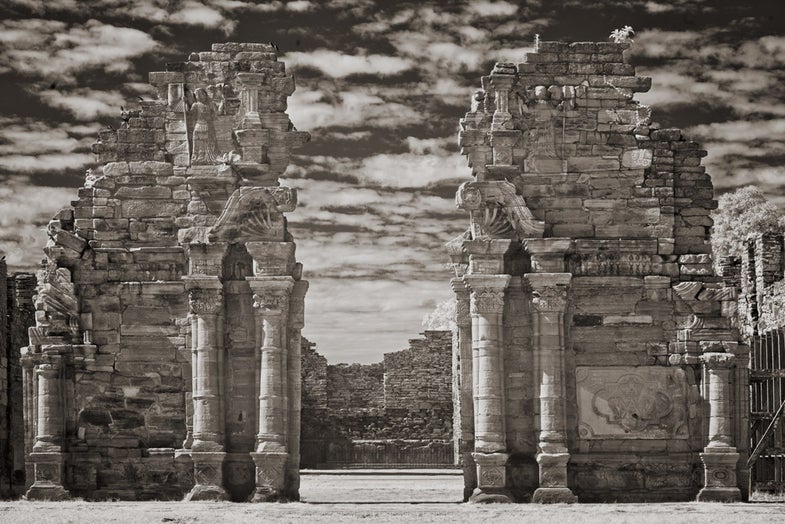 Ancient ruins take on a ghostly, otherworldly look in the photographs of Arthur Drooker, who used infrared capture for the images in his just-published book,_ Lost Worlds: Ruins of the Americas_. Here’s what he has to say about his technique and travels:

How did you take up photographing ruins?
I began my journey in ruins photography in 2004 with a trip to Angkor Wat in Cambodia. Something about those old temples entwined in the jungle wouldn’t leave me alone—I had to go there. I was so taken with these ancient structures that I set out to find ruins and preserve them using infrared photography.

Which came first for you, the ruins or the infrared?
I started shooting infrared specifically to photograph ruins. I find the subject and the format perfectly suited to each other. Ruins are mysterious and otherworldly, and so is the infrared effect.

You worked with IR film before digital. How has digital changed things?
Digital has made shooting infrared much easier. There’s no red filter, no back-focusing, and no changing bags to deal with; this streamlines the whole process. Another advantage to shooting digital infrared is being able to see results instantly, which removes the guesswork and finger-crossing that always accompanied infrared film. However, some things don’t change—shooting digitally hasn’t changed how I evaluate a scene.

That’s quite a commitment, getting a 5D Mark II modified for IR only.
I first modified a 10D several years ago when I found you could convert digital cameras to take nothing but infrared. From there I moved up to a 5D Mark II. It is a commitment, but with the better technology and more megapixels available, I just had to step up. The better resolution also allowed me to make larger prints. With the 10D I would be reluctant to go any bigger than 16×20; with the 5D Mark II I can go to 30×40.

You note that the ruins need to be suitable for infrared rendition. What are your criteria?
They must be situated in nature to get the full effect. Leaves, grass, and overgrowth reflect infrared light, while bricks, stone and wood—the stuff of ruins—do not.

Part of a classic IR look depends on blue skies, puffy clouds, and sunlight on healthy green foliage. Did weather constrain your work?
Weather is certainly a factor. While shooting for Lost Worlds, I traveled to certain areas during their dry seasons to ensure that I’d have sunny days. I joke that when I’m shooting on location, I’m just as much a weatherman as I am a photographer. I constantly check forecasts. Sunny is definitely good. Sunny with some clouds is even better!

Another of your criteria is that the ruins have to be preserved as historic sites. What sort of sites wouldn’t you photograph?
Abandoned buildings, dilapidated barns, or things like the Ninth Ward in New Orleans after Katrina. I don’t want to put any of that down; it’s just that at some point every photographer has to put parameters around what is potentially an infinite subject. I want to photograph places that people can to go to for historical significance and emotional resonance.

How do you work a scene?
By the time I arrive, I’ve already done advance research to familiarize myself with the site, and I have a pretty good idea about what to shoot and what to avoid. I typically spend about two to three days at a site to allow for changes in weather and, just as important, to get all the gee-whiz out of my system and see the ruin on a deeper level.

As soon as I arrive on location, I get my bearings and start looking for what to shoot and when. If the light is right, I’ll start immediately shooting. Other times, I’ll make a note to come back to a specific spot when I know the light will be better. I’m very surgical in my approach. Once I know what I’m going to shoot and when, I work it repeatedly with the intention of fine-tuning the image. This might mean waiting for a cloud to show up in a particular part of the frame, or waiting for a shadow to be just right, or waiting for the sun to dip a little lower to bring out more detail.

This project clearly took a lot of travel. How long do you stay in one area?
I made 10 trips to complete photography for Lost Worlds: one to Central America, two to the Caribbean, three to South America, and four to Mexico. The length of each trip varied from one to three weeks. All the travel was done over the course of about two years.

How did you find hosts, guides, and drivers?
In the case of the Caribbean locations, I received wonderful support from the tourism boards of the various island countries. They saw Lost Worlds as a way to boost cultural tourism, and graciously provided guides and drivers. For the other locations, I relied on a travel agent with whom I’ve worked for several years. Through her contacts I had wonderful guides and drivers in Mexico, Central America, and South America.

You work with R. Mac Holbert for image processing. Tell us about that.
Mac and I have worked together for 17 years. He’s become a great friend and we’ve developed our own shorthand. Typically, I will send him a selection of RAW files and we will work remotely via iChat and screen-share. I watch him work on the files in real time, and we talk about them each step of the way. It’s very much a give-and-take collaboration. No one works curves, shadows and highlights, and midtone contrast in Photoshop better than Mac.

The toning of the images appears to be subtly different in color from picture to picture.
The toning is the same; you probably see different strengths due to varying contrast characteristics in the photo. Several years ago, Mac Holbert and I came up with what we call a recipe for toning my ruins images. I think of it as our version of sepia; it warms up the images just enough to notice and makes a subtle connection to the past.

There is an absence of people in the photos. How do you manage that?
I always go to these places at times of day when there aren’t many people around. The overwhelming majority of photographs in the book were taken with no people around. And in a lot of cases, when people see you’re a serious photographer, they will stop and wait for you. I’ve encountered that many times, and I really appreciate it. But if I’m in a situation where I’ve got to get the light when I can get it, I engage in depopulation in Photoshop.

You sometimes correct jagged or crooked features in Photoshop. In what situations will you do this, and to what extent?
Ruins frequently have crooked walls; combined with the distortion of a wide-angle lens, they can throw an image off balance. In these cases, we’ll find a single wall to serve as our straight line and adjust or rotate the image accordingly. It usually works. Beyond that, I don’t do any additional correcting.

Some purists might view this as excessive fiddling with reality.
As soon as you put the camera in your hand, you are making decisions every step of the way to manipulate the image. It’s all subjective, and photographers have to decide for themselves what is “excessive fiddling.” I have no problem removing litter, or an offending telephone wire, or even people from a shot, if I find them distracting from the composition in any way. I don’t consider this excessive, and frankly, I don’t care if others think it is.

The photos have a ghostly quality. Have you ever felt spooked on a shoot?
Not in an ooga-booga kind of way, but there have been some occasions where I’ve felt a presence, shall we say. Sometimes I feel more connected to a particular ruin than to another. I’m not sure why that is—sometimes I feel it is more than a photographic or visual connection, more deep-seated, psychological or spiritual perhaps.

What sort of information is available on ruins around the world?
All kinds. A lot of my research began by going online and doing simple word searches, such as “Argentina ruins” and, voilà: hundreds—if not thousands—of images would appear, as well as text describing them. I also found a lot of useful information in Lonely Planet and Moon Guides, as well as a variety of books on Mayan and Incan civilizations. Lost City of the Incas by Hiram Bingham—the explorer credited with “discovering” Machu Picchu—was a particular favorite. Another great read is Incidents of Travel in Central America, Chiapas and Yucatan by John Lloyd Stephens, which is considered by many to be one of the best travel books ever written about ancient sites.

What would you suggest to readers who’d like to try ruins photography?
Go online or read books about various ruins and go to the ones that stir you emotionally. Once you’re there, take your time. Really study the site. Look for great light and interesting angles. Try to see the place beyond a typical postcard view. And be patient—you’ll be rewarded.

Arthur Drooker is also an Emmy Award-winning writer and director of TV documentaries. See more of his work at www.arthurdrooker.com and www.lostworldsbook.com. 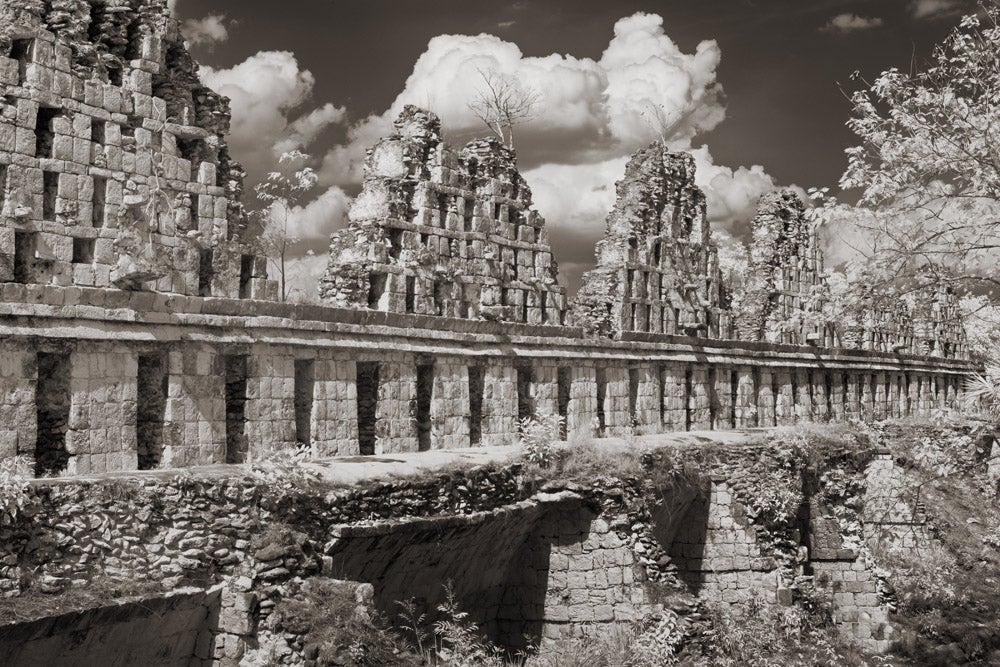 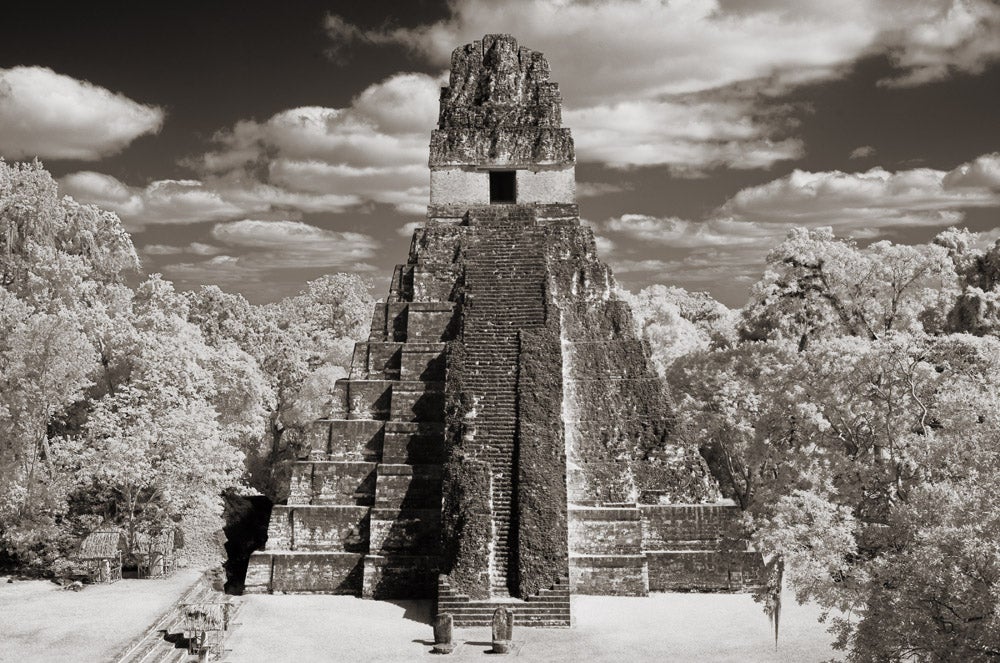 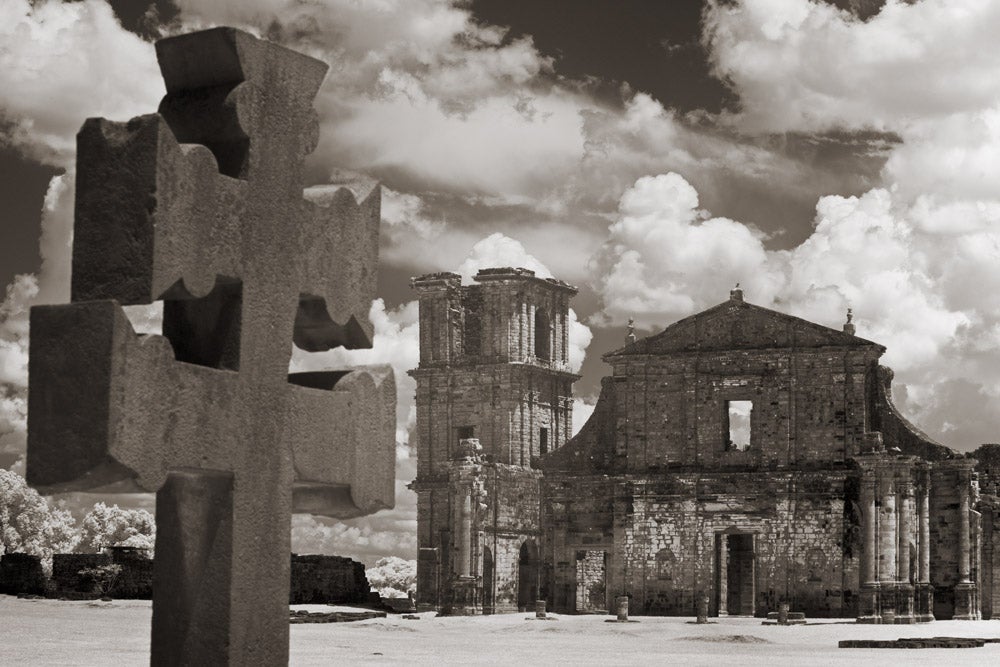 Drooker used his 70–200mm lens to get telephoto compression of the foreground cross against the background ruin. Exposure was 1/100 sec at f/11, ISO 200. 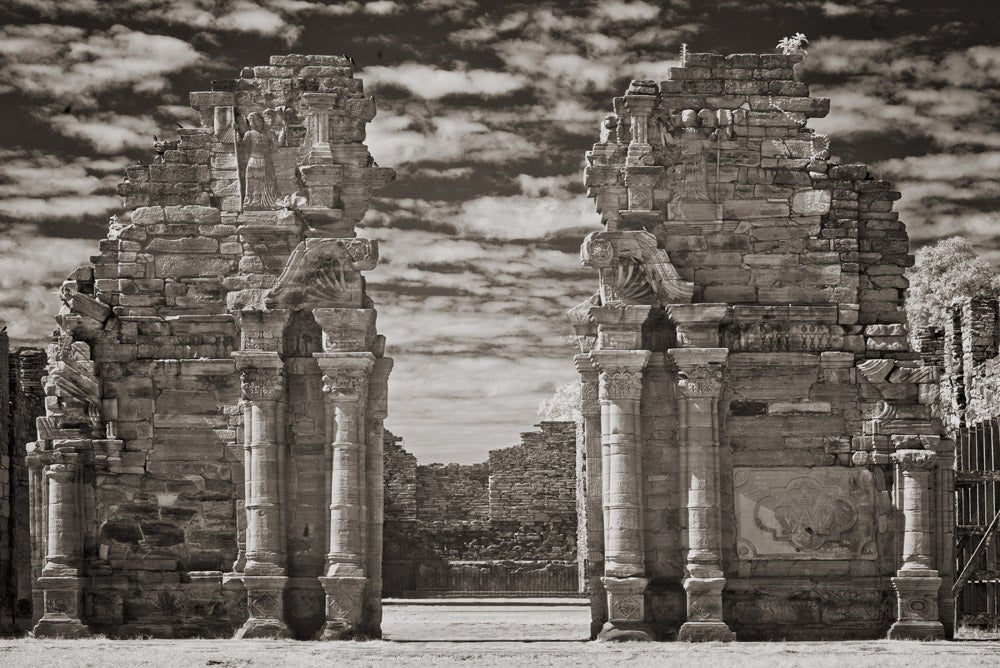 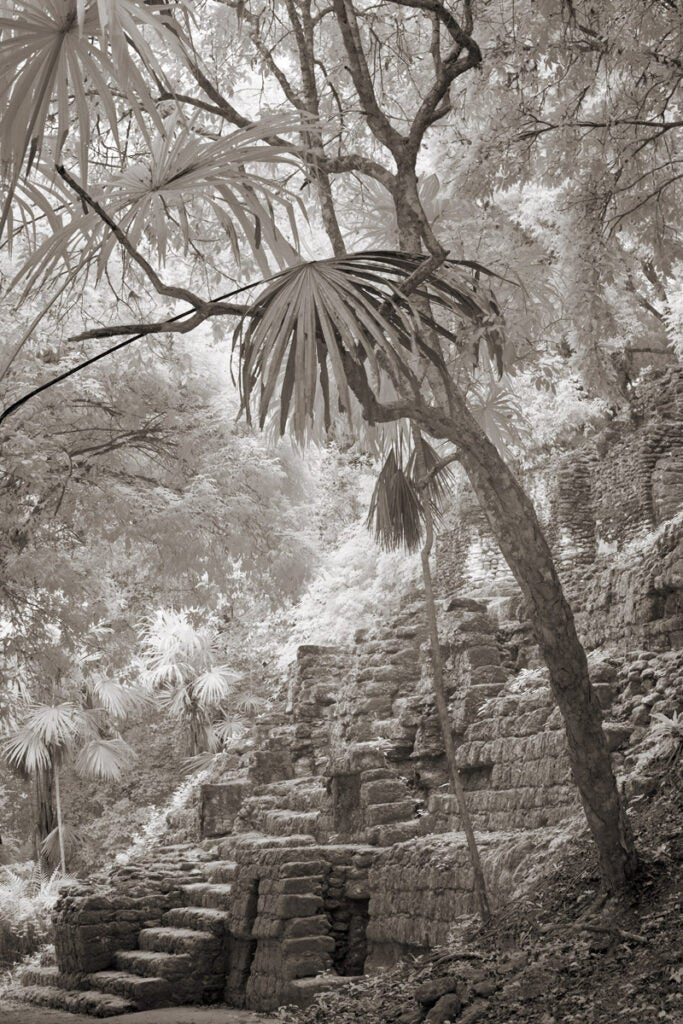 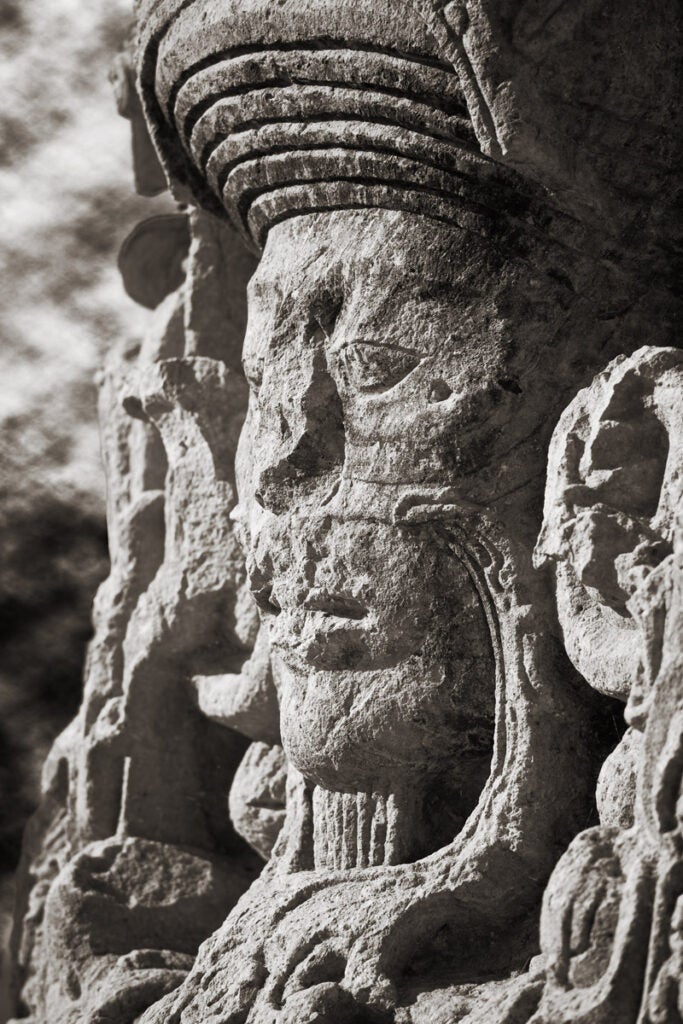 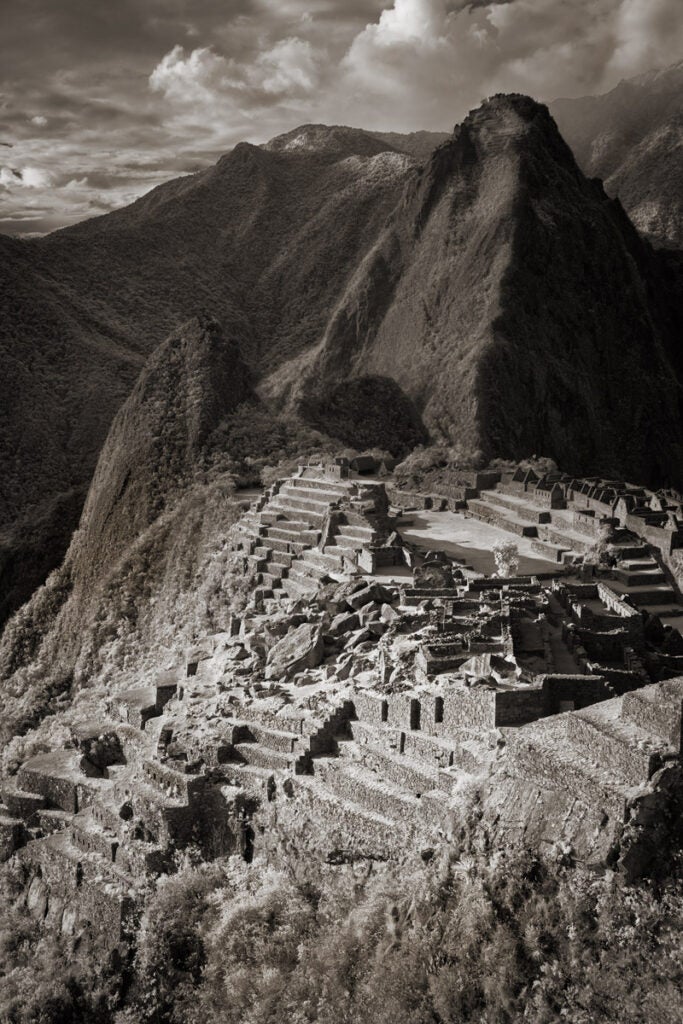 Drooker used the 24–70mm f/2.8L lens for this wide view of the ancient city, shooting at 1/160 sec at f/8, ISO 200. The scene was later “depopulated” of tourists in Adobe Photoshop CS5.
Features
Photography Tips