Tips from a Pro: Cristina Mittermeier On Mastering Environmental Portraits

"Melt into the background, stay very still, and let light unfold in front of you" 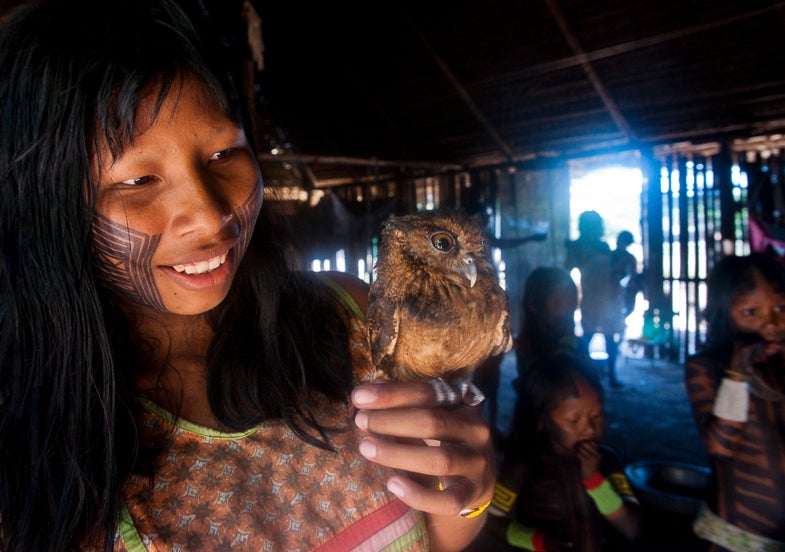 Cristina Mittermeier’s passport has a lot of stamps in it. Her photography has taken her to the furthest reaches of the world, especially during her tenure as president of the International League of Conservation Photographers. Her photographs capture people in their natural environments, offering unique looks into people’s lives and the cultures that shape them. Here, she shares some tips and strategies for making environmental portraits that are both beautiful and powerful.

During a talk, I once heard you say that, even in a portrait, the little people in a frame can really make a difference. Can you elaborate on that a bit?

That’s something that was told to me by a friend of mine who’s a photojournalist for the Boston Globe. We were together in Missouri taking a photo workshop and while we were both exploring our assignments, he showed me a couple pictures and said, “it’s all about the little people,” and that stuck with me.

The foreground of a picture matters a lot, of course, but as you begin to grow in your photography and you begin layering an image, you realize that what the little people are doing in the background is just as important. As you get better at sitting and waiting for the little people to fall into the frame, you even find it very entertaining.

How do you go about developing the skill to do that?

I recently spent a couple of hours by a river in Brazil watching people jump off of an old piece of machinery into the river. Now, when I look at those pictures, what the little people are doing in the background adds a lot to the image. When somebody’s looking at a photograph, the more layers you have, the more time a person can spend going around the frame trying to figure out what the story is. It creates an amazing vignette of life. 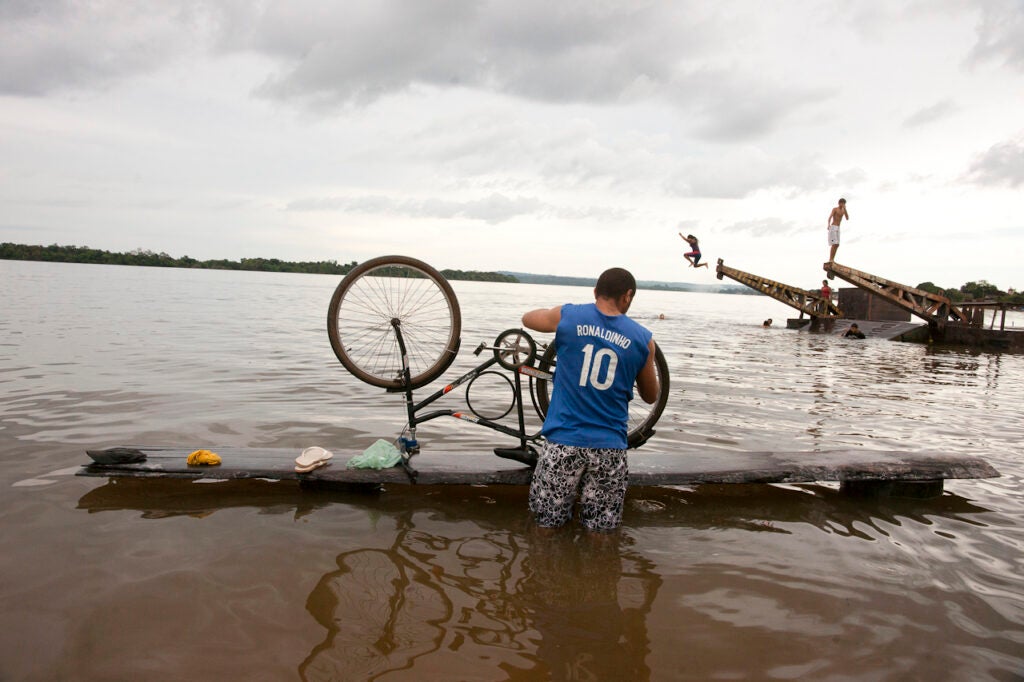 The impacts of the Belo Monte dam

Impact of the Brazil, Amazon, Belo Monte dam on the local and indigenous population, especially the Kayapo

Does this idea clash at all with the old adage about filling your frame with your subject?

In a way you are filling the frame, not with objects, but with concepts and activities. When you’re just starting, you just shoot, shoot, shoot, hoping that things will fall into place. As you relax and start taking the time to really see, waiting for things to fall into place becomes much more important.

What’s your process for picking a place that will be conducive to the kind of photographs you want to make?

Like with any other photographer, my process is continually evolving. Recently, I’ve been falling into that stage of photography where I find a place I really want to be shooting, a perfect scene. Now that I’m a more mature photographer I have the gift of time to just sit and wait for the light to be perfect and things to happen. Seldom do you come into a scene where you find everything in place by some miracle.

I think photography is about having the vision in your head and finding the location where you can make that vision happen and then waiting. It’s the art of disappearing. The first few hours you’re in a location, everybody notices you with your camera, but as time passes by, you just become part of the hustle and bustle. People start ignoring you.

Approaching subjects in our own environments can be taxing. Put that situation in a foreign environment and it must get exponentially harder to make a connection.

Yes. It’s very difficult. Some of my best work is in communities that I’ve been visiting for 20 years. It takes a long time to become part of the fabric of a scene. Sometimes it takes a couple hours before you can start approaching people.

Even if they have seen photographers before, many people don’t like having a camera stuck right up in their face. You want to be polite and friendly and not too chatty. Then you put yourself into the picture. Melt into the background, stay very still, and let light unfold in front of you. That really takes training.

A mature environmental portrait photographer needs to be able to put their shyness away, take themselves out of the picture and not be awkward with yourself.

Do you have any strategies that might be able to help someone who isn’t as comfortable approaching strangers?

When you first approach somebody to photograph they’re usually self-conscious and they’ll often give you a forced smile or give you a peace sign with their fingers. Sometimes what I’ll do is pretend that there’s something wrong with my camera and start fiddling around with it until they go back to doing whatever they were doing. I just stick around. I try not to be a nuisance about it, but I make it clear that I’m not going anywhere. I try to be quiet and in the background. Usually people relax. Before you know it, they’ll forget that you’re there. It works anywhere, even for wedding photographers.

What kind of gear do you typically bring with you on a location shoot?

I lean a lot on the 24-70mm lens. I try to keep it between 35mm and 70mm. Even the best lenses give you a little bit of distortion, but I have to get intimate with people. There was a time when I was using flash with all kinds of filters to illuminate scenes, but it’s very chaotic, so now I’m focusing more on the natural light. Some people are even amused by the flash, but it really does add to your presence as a photographer.

It’s pretty common for photojournalists to shoot with wide lenses, but it’s interesting to see someone using it primarily for portraiture.

The wide angle is what I call my story telling angle. I never want to go too wide to because of the distortion, but I find myself wanting to include more and more of a scene. For me, it has become something of a cheap trick to pull out a telephoto lens and take a portrait. I have a whole bunch of beautiful portraits taken from 18-feet away. Those are cheap shots for me. They’re so easy to make.

How else has your work changed over the years?

The aesthetic of a photographer is constantly evolving. I remember 10 years ago, when I wasn’t as mature in my work, always having people facing straight on at the camera. I found that very pleasing back then, but I look at some of those portraits now and I’m shocked. They’re kind of centered and even though they’re beautiful, they’re not very interesting.

These days I still try to use the rule of thirds as much as I can and fill the frame. As I said before, though, it’s not necessarily about filling the frame with an object. It’s about capturing action and the elements that I find interesting. Of course, sometimes you just have to break all the rules. I still see photographers that I really admire and I wonder how they do it.

What have you been concentrating on lately?

Lately I’ve been learning a lot about storytelling and the narrative art from photographers who know a lot more about that than I do. What I’ve found is that you have to have an establishing shot for the location to tell people about the place. Then you have to have your characters and slowly you start exploring the story. All the shots have to be related somehow. It really helps when you think about those shots before you leave. We have such limited real estate that every photograph really has to work hard to be part of the story. Those aren’t shots you get by chance. You have to think about the shots as they fit into the story’s arc.

A friend of mine was telling me the other day to sketch the shot. That way, when it appears in front of you, you’ll recognize it and be ready to shoot.

Thanks for sharing your secrets.

One of the most amazing things about being a photographer is that there’s always room for growth and learning. And we have to pass all of that on to the next generation. That’s why I give away all of my tricks. 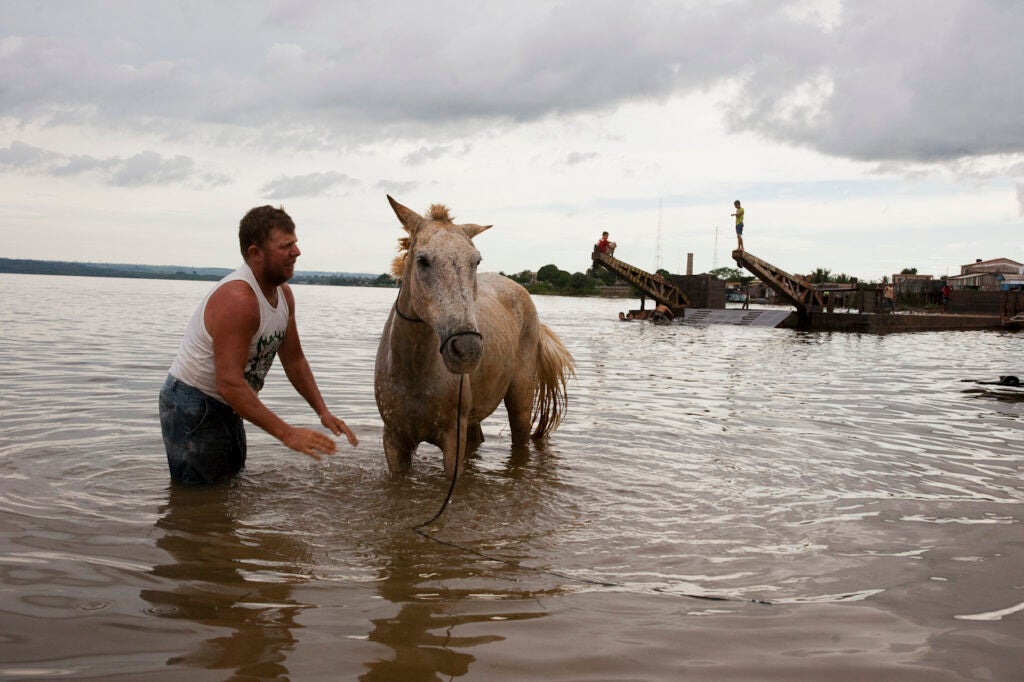 The impacts of the Belo Monte dam

Impact of the Brazil, Amazon, Belo Monte dam on the local and indigenous population, especially the Kayapo
Stan Horaczek

Features
How to
Interview
Portraits
Tips From A Pro
travel