How To: Light an Outdoor Scene with Classical Lighting

Learn to light from the soul 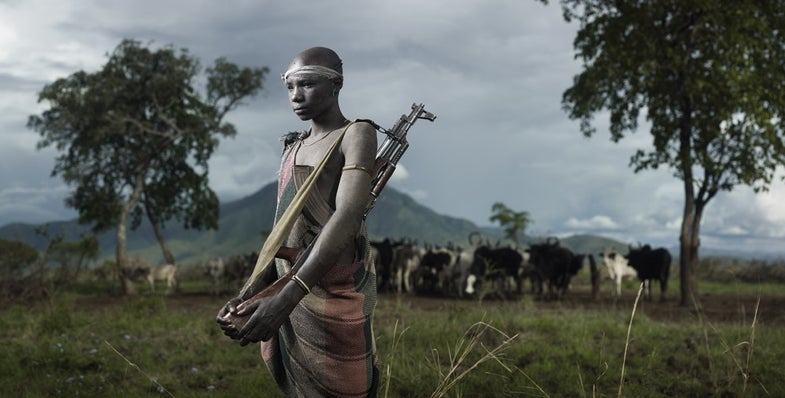 For lighting portraits, you can accentuate the shape of a subject’s figure, bring out the texture or drape of the clothes, or, as in environmental portraits, adjust the light so that the subject and background are of equal importance. Or you can light for character. Joey Lawrence, a young New York advertising pro and teacher (www.learnfromjoey.com) does just this for an ongoing personal series of Ethiopian portraits.

Lawrence (who goes by Joey L. professionally) has made three trips to the remote region of Ethiopia’s lower Omo Valley, where he lavishes as much photographic care and attention on herders and other natives as he does for any Hollywood star. “Usually ethnic photography is presented in a very photojournalistic way,” says Lawrence. “That’s not my intent. For me, each image is more a collaborative effort between myself and the subject.”

To make the portraits, he uses the same lighting equipment and techniques in the depths of Africa as he did for his famous ad campaigns for the Twilight films. Instead of Robert Pattinson, his subjects are cowherds such as Kolotola, depicted here. To bring out dignity and character in his subject, Lawrence uses two main techniques, Rembrandt lighting and spotlighting. Favored by painters and photographers for centuries, Rembrandt lighting is widely considered one of the most flattering forms of lighting for the human face. Throwing half the face in shadow, it simultaneously suggests the shape of the head while injecting shadows—and with them, a sense of mystery.

To create it, says Lawrence, “we held the softbox just slightly off-camera on the left side of the image and suspended it on the opposite side of the subject’s face, so that the shaded side is toward the camera.” The result gives a classic look to a subject not usually afforded a classic interpretation.

Another surefire studio tech-nique Lawrence applied here is spotlighting. To showcase his subject and allow the 13-year old cowherd to stand out from—and transcend—his surroundings, Lawrence said he “underexposed the background by about 2 stops, while properly exposing the subject with my lights.”

The result: a portrait in which lighting helps heighten—almost venerate—a subject and make character the message.

Shooting in the Omo Valley, one of the remotest corners of Ethiopia, Joey L. lugged much of the same gear he uses in his New York City studio. He housed his Profoto 7 Pro-7B strobe head (A) in a customized softbox (B). He recessed the head deeply into the box in order to produce a slightly more contrasty light, with controlled spill and faster falloff that illuminated little of the immediate foreground. An assistant (C) held (and aimed) the softbox and head, which were mounted on a monopod (D). The photographer controlled the strobe with a Profoto 7B powerpack (E) which he juiced with a car battery (F). (The car battery was charged by a Brunton solar panel, not shown.) Joey L. shot with three Phase One products: the 645 camera body (G), P45+ digital back, and 80mm f/2.8 lens. He fired the strobe wirelessly with the PocketWizard Plus II transceiver and receiver built into the 7B.

Lighting How To
Photography Tips
How to
lighting
Shooting