John Neitzel Explores the many dimensions of Japan's largest city 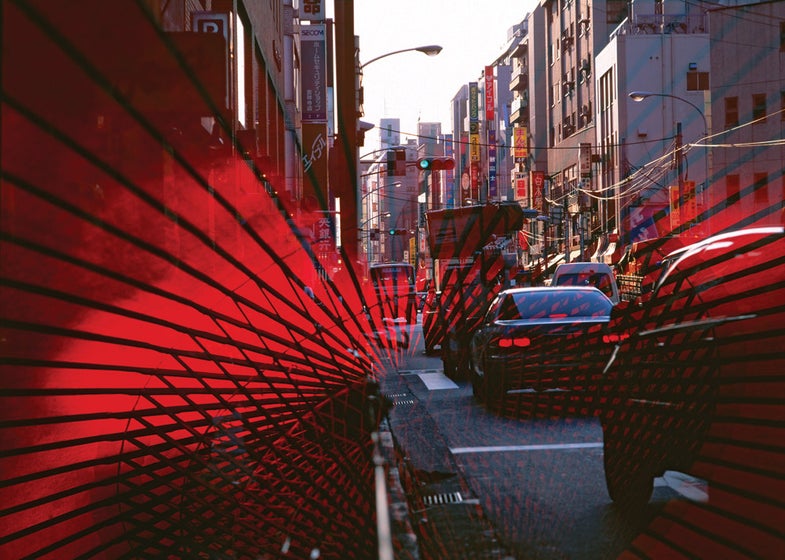 Though he lives in New York, John Neitzel’s photography is rooted in Japan. “I lived there for two years in high school, and it’s also where I first taught myself photography,” he says. “I have a personal understanding of the culture that’s very different from my understanding of New York.”

He’s featured Japan as a subject many times, experimenting with different media in both personal and professional projects, ranging from 360-degree virtual tours to video. So it may seem strange that he captured these double exposures of street scenes in Tokyo on a much older medium: Fujichrome Velvia 50 rollfilm. But Neitzel insists that was the point. “When I started this project in 2006, I was working only with digital. I was tired of sitting in front of the computer, manipulating photos, and making them perfect.”

He wanted to recapture the fun of film photography, but to do it in a new way. “In Tokyo, you see such a blend of old and new, tradition and contemporary, both urban and in the gardens,” he explains. “I wanted to combine them, but to do it in a way where I wouldn’t necessarily see the results.”

Each day, he would hit the streets with a Mamiya C330 and several rolls of 120 film, shooting each with a specific focus—nature in the gardens, neon lights in urban scenes, or prayer time at temples. After finishing a roll, he would label it by subject, rewind it, and reshoot the roll in a contrasting location.

His biggest surprise came after processing the film. “I knew to expose for highlights, and shoot for contrast, but I was blown away by how well the images seemed to line up,” he says. “It was an effect I was never able to get by layering in Photoshop.” His scans of the transparencies needed very little editing.

Neitzel has turned his experiment into an ongoing series titled Ichi-go, Ichi-e, which means One Time, One Chance. He explains, “Tokyo is one of the most interesting cities to explore and to capture,” he says. “Not knowing what you’ll discover is what photography is all about.”