4 of the World’s Most Dangerous Adventure Photography Jobs

Some photographers will do anything to get a shot: get in a shark's face, take organ-squashing G-forces, dangle from a cliff or wade through floodwaters 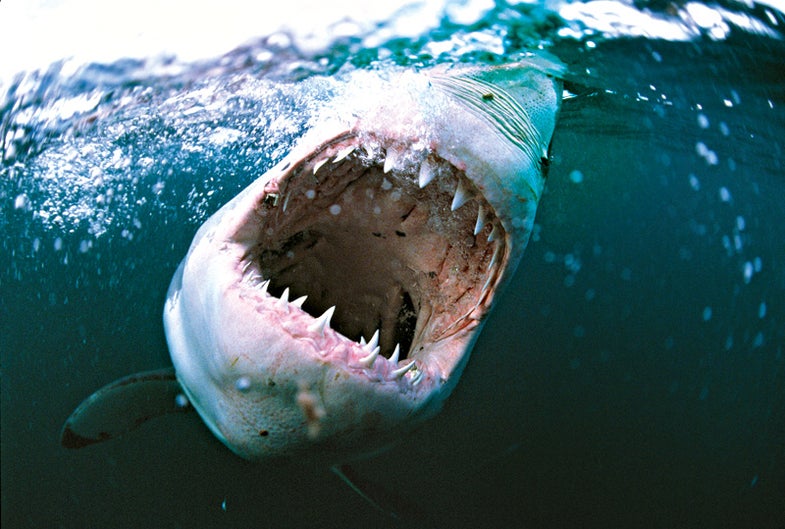 You might think this great white shark is about to chomp onto Amos Nachoum’s camera housing. But you would be wrong. The shark had already chomped on it.

Nachoum was lying prone on a dive platform floating in the Southern Ocean off Gansbaai, South Africa, with his upper body extended over the water. “The dive master was standing above me, holding me by a belt around my waist,” he relates. “We placed bait on the water to attract the shark, with another dive master pulling the bait away slowly so the shark would end up in front of the lens. The shark started swimming full speed toward the bait, opened its jaws—and missed the bait. Instead, it closed its powerful jaws on the first thing in its way—the camera housing.”

The dive master, meantime, was more concerned with Nachoum’s safety than the photo op, and was trying to lift him up and away. But the jaws kept clamped on the housing. “Eventually, the dive master lowered me down and the shark let go of the housing. I squeezed the camera trigger with my last ounce of ounce of energy and the first image was the best one.” This self-assignment was later used as a promotional photo by Discovery Channel.

His scariest moment? No, not this one, but when Nachoum, in full scuba gear, was photographing a polar bear from underwater. Research and interviews led him to the assumption that bears would dive no deeper than 30 feet. “So, 30 feet below this bear, just as I had set my camera and pointed it up, I saw the paws in my face. I went into alert mode and rapidly kicked deeper, but he kept coming after me to about 70 feet. When I stopped at about 85 to 90 feet, the bear leveled up and rapidly got to the surface.”

If Ed Stafford, the first person to walk the entire length of the Amazon River, looks apprehensive in this photo, it’s for good reason, notes Peter McBride, assigned to cover part of the trek for Men’s Journal. “We had come to a flooded section of the forest,” he says. “We started wading across it, hoping to find dry ground just ahead, but we ended up wading for some five to six hours. Ed wanted to find dry ground because there are plenty of unknowns in the water—snakes, candiru, electric eels—and it’s also slow going, as the water is inky black, and you can’t see what you are crossing—logs, snags, and so on. Many of the logs are very spiky and sharp—good shin crackers—so it isn’t a comfortable place to go for a stroll. It was powerfully beautiful, the silence, the feel, but also kind of like walking through the darkest swamp of your worst childhood nightmare.”

The party also had to flee a swarm of Amazonian wasps. “We suffered one sting—not too bad but a bit nerve wracking,” McBride says. “Fortunately, we ran into no hostile locals, and no pit viper encounters.”

Not long after this picture was taken, when a 7-foot-long electric eel swam between McBride’s legs. “These eels have enough voltage to knock you unconscious, leading you to fall face down and drown. If I knew it was there, I might have panicked, which might have led it to zapping me.”

By the way, the aforementioned candiru is a bloodsucking vampire fish, which, according to Amazonian lore, can swim up a person’s, um, urinary tract and lodge itself in the urethra with its sharp spines. This has been for the most part debunked, although it still gives one pause. 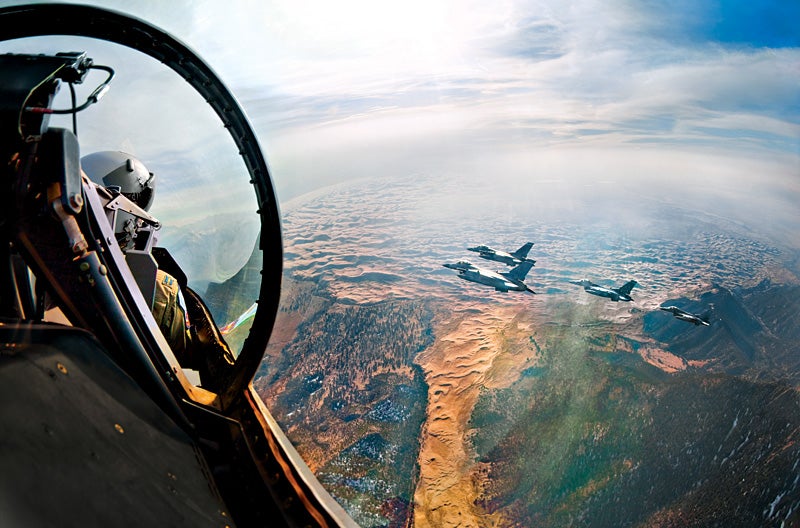 On assignment for 5280, a regional magazine in Denver, Tyler Stableford got to fly backseat in an F-16D with Capt. TenEyck LaTourrette of the Air National Guard’s 120th Fighter Squadron. While Stableford had done considerable photography of the military before, this was his first time riding shotgun in such a fast ride. “I carried three bodies and lenses with me on the 90-minute flight,” he explains.

“Because my cockpit was active—with all the controls and ejection handles live—I couldn’t use any straps for my cameras. I put two cameras just alongside my left hip in an open ThinkTank Photo Speed Racer bag, and handheld one at all times. So long as I didn’t black out while holding a camera, it seemed like a good plan. Under the heavy G-forces that F-16 pilots fly, the weight of cameras—and everything else—can be multiplied and could cause a lot of damage to the plane if let loose.”

So far, so good. Then: “The pilot surprised me with really heavy G-forces immediately after takeoff,” Stableford continues. “I was shooting video with the 5D Mark II and 15mm fisheye at the time, holding the camera out in front of me, and he just pointed the plane toward the moon. We went from 5,000 feet to 16,000 feet in a matter of seconds, hitting over 7.5G— more than any G-forces sustained during the history of U.S. space flight—and it was all I could do to keep from blacking out and letting go of the camera. I lost vision and had to close my eyes to try to stay centered.”

The coda to his story: “When I asked him about it later, he said, ‘Aren’t surprises great?’ You can see me struggling to keep it together during takeoff on the video on my website.”

Notice that Boone Speed is photographing climber Chris Sharma at Red River Gorge in Kentucky from above. He didn’t get there by helicopter. It helps that Speed is a world-class rock climber himself. “In this case, Chris climbed an adjacent route to the right of this one, as a warm up, and clipped my main rope into the anchors of that route,” Speed says. “I then ascended that rope and used other ropes to pull me in the direction I needed in order to get into position, as well as stabilize me for the shoot. We work very efficiently and had the route rigged within half an hour.”

Then it came time for Sharma to climb the tough route. “This particular shot is special because Chris—considered by many to be the best rock climber in the world—was trying this very difficult route for the very first time. Being there for that moment of uncertainty, while he’s literally clawing his way up the wall, is critical when trying to capture the essence of his determination, focus, and brute strength.”

What scares him the most? “When a rock goes whizzing by your head, it’s almost like ‘whew, glad that missed me,’ but there’s no time to be scared. When you’re hanging from a rope, you’re concentrating so hard on tweaking into position, and remaining stable, and keeping your eye on the target. The scariest moments are the ones that have time to build, like being in an avalanche path as the sun starts hitting the snow face above and destabilizing it. I’ve been in a couple of avalanche paths that were sketchy. It’s weird, and there’s fear. And this real danger might not strike fear in the unknowing. I’ve been in places where tourists set up a picnic in a truly dangerous spot.”