Scott Ferguson captures fighters during their transformation to becoming pros 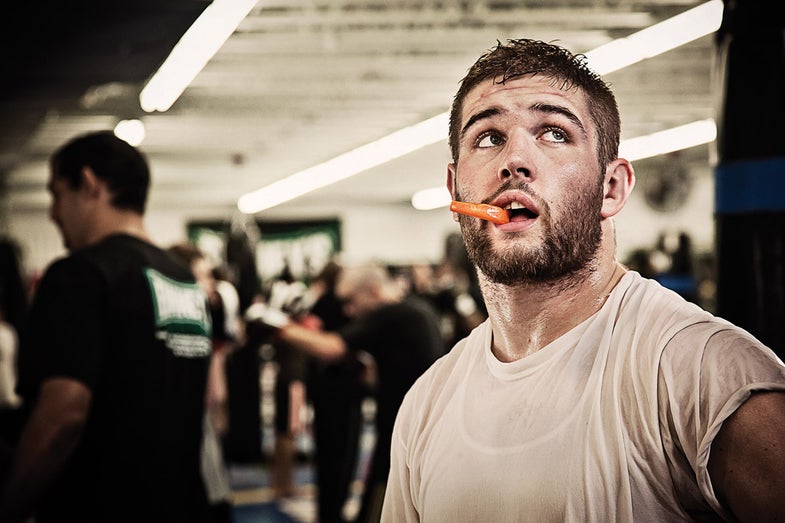 For Scott Ferguson, photographing a league of Mixed Martial Arts fighters meant changing his ways. “My work is more conceptual shots, where I have control over the lighting and the scenario,” the St. Louis-based advertising photographer explains. “This project was more like photojournalism, which I have very little experience in.”

But in mid-2010, he found himself seeking that type of venture. Ferguson had learned about MMA fighting, a full-contact hybrid form of combat sport, when the son of a friend took it up several years earlier: “I’d watched him transform himself, physically and mentally, through great discipline,” he says. Attracted to the idea of such a transformation, he contacted his friend’s son’s league and got the okay to shoot. By showing immediate respect for the fighters and offering to make a promotional video, he quickly built trust and access at matches and the gym.

Greater were the creative and technical challenges. “I wanted to do portraits as well as action photos of the fights, many of which took place in crowded, dimly lit areas,” says Ferguson.

Used to a tripod and an arsenal of lights, he instead handheld his Canon EOS 5D Mark II and wide-angle or telephoto zoom, using just a Speedlite. “I used a lot of bounced light, which is less intrusive,” he says. A Smith-Victor over-shoulder stabilizing brace helped add steadiness.

For training and pre-fight por- traits, he’s used a direct approach; post-fight capture requires more sensitivity, as these athletes are often severely beaten. “MMA takes extreme discipline,” he says. “I’ve never once seen anybody lose con- trol of their emotion post-match, which shows respect for the train- ing. I want to respect that, as well.”

Now, more than a year into the project, Ferguson has a great series of images and no plan to quit. “Putting yourself in an environ- ment where you’re constantly pushing yourself, while really get- ting to know the people, has given me a completely new experience of photography,” he says. “And it’s also let me live through them vicariously.”