Tips from a Pro: Lighting a Large Scene 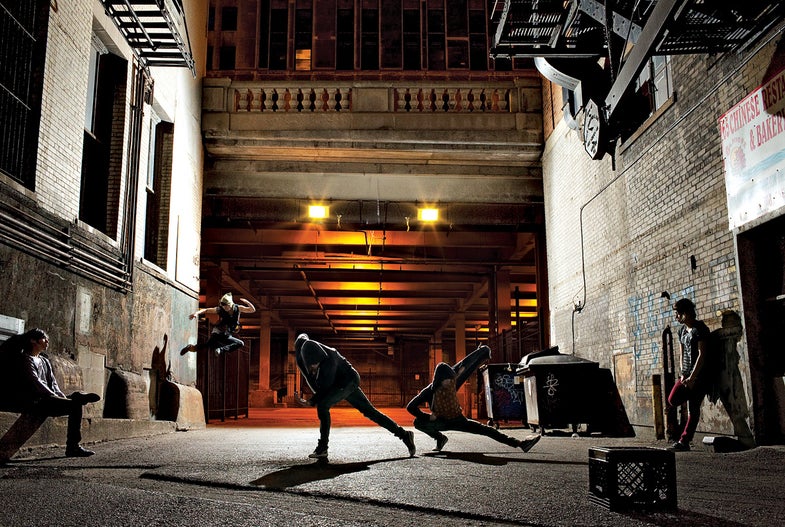 The main problem with lighting a large area at night? Often, it’s getting your lights close enough so their output can reach your subjects with adequate power. For Thomas Chadwick, a pro who specializes in portraits, sports, and stop-action photography, the answer was simple: He placed his main light source (a backlight) right in the middle of his set, where it could be seen in almost every shot he took­­—except the final version, shown here.

In October 2010, the Chicago shooter took on a personal project of photographing a professional breakdancing group. His first task was finding a background. He wanted a stage-like location with wings and a proscenium arch that would telegraph the group’s theatrical ambitions. “I wanted a gritty, quiet, but dramatic site, with its own interesting ambient light,” says Chadwick. The perfect set would be a deserted, slightly threatening, urban scene with street cred. Shooting after dark would add to the sense of menace.

To create a natural lighting scheme, Chadwick positioned his main light high on a lightstand almost directly facing the camera. He wanted its broad, bright output to suggest that the dancers were backlit by the existing lights mounted underneath the bridge that formed the proscenium of this theatrical space. “My goal was to replicate those lights, but with a strobe that could freeze the dancers’ motion,” he explains.

The difficulties in this setup were twofold. First, the main light cast its beam into Chadwick’s lens, creating “massive” amounts of flare, he says. To eliminate it, he placed a large black flag between the light and camera position, shielding the lens and erasing any hint of flare.

Second, his main light and its stand were obviously visible in the picture. Not good. To solve this problem, he shot a separate “base” exposure of just the background (without main light or dancers). Then by layering images in Adobe Photoshop CS5, he simply “erased” the light, stand, and any glare created by its spread.

The shot required eight exposures in total, which Chadwick composited in Photoshop. Most were shots that froze each individual dancer in midstep.

And, yes, the photographer has a tip for readers who want to attempt a similar after-dark, urban tableau: “Watch out for the king-size rats,” he says, with a laugh.

Thomas Chadwick backlit each breakdancer here with a Profoto Pro-7b battery-operated powerpack and 7B lamphead (with 7-inch reflector) that he mounted on an Avenger lightstand (A). He fired the strobes with PocketWizard Plus II flash triggers. To create a strong edge light around each figure, he re-aimed the light between exposures, hence the varying shadow angles. He prevented flare from the backlight by suspending an 18×24-inch Matthews flag (B) from an Avenger 1 C-stand and boom (C). Minimal frontlighting came from a Profoto beauty dish (D) and a second 7B lamphead/powerpack combo. For instant feedback, Chadwick tethered his Manfrotto tripod-mounted camera (E) to a laptop (F) powered from the battery of a nearby car (G). The center-frame light and stand he later erased in editing.

For more of Chadwick’s action and portrait photography, visit his website, a-photographer-called-Thomas.com.

Lighting How To
Photography Tips
How
How to
lighting
Shooting