Behind the Photo: Paul McCartney at Yankee Stadium

A PopPhoto.com editor photographs a legendary rocker on a grand stage 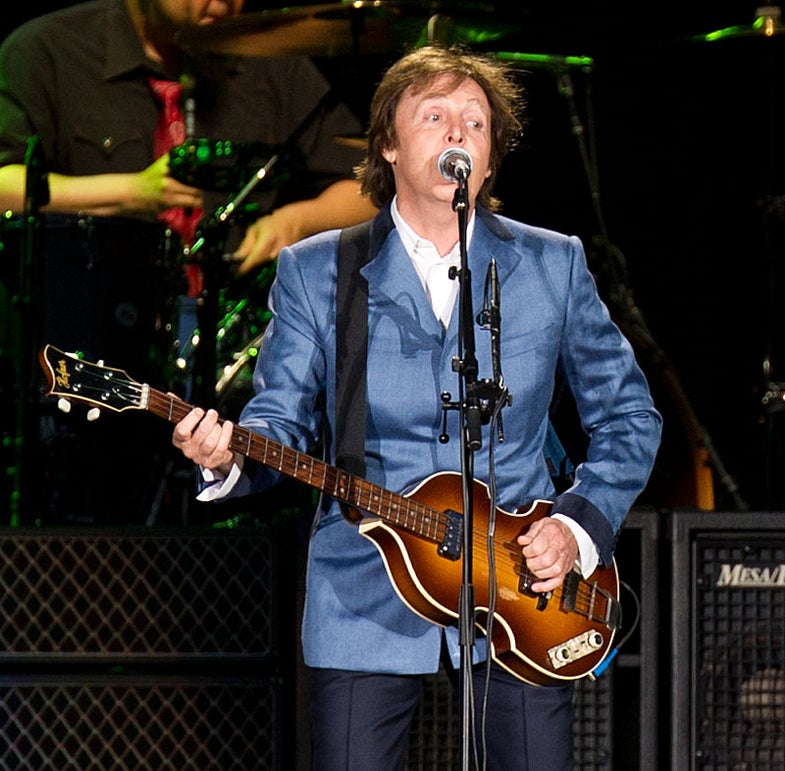 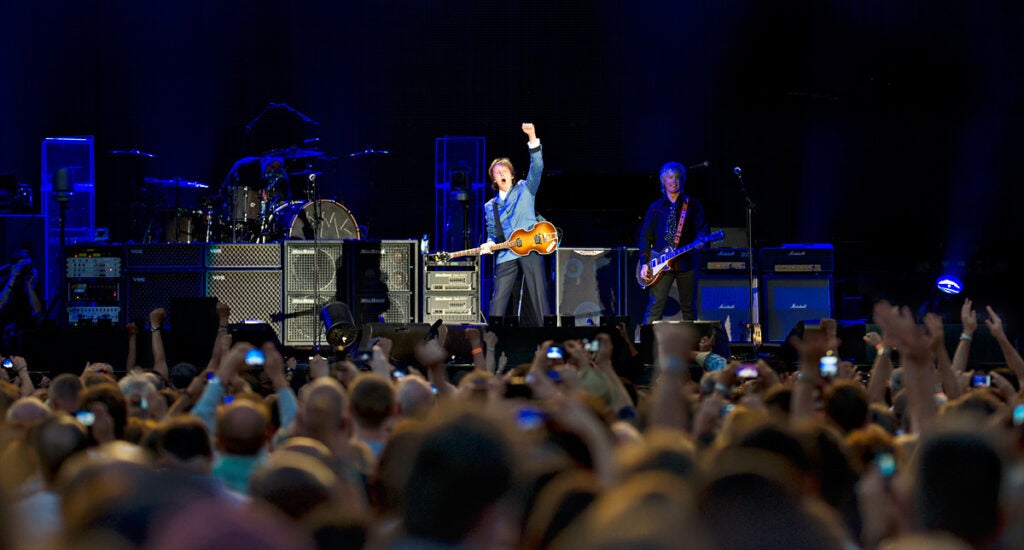 I recently began shooting concerts for Sound + Vision, a magazine also published by Bonnier Corporation, the publisher of Popular Photography. Last Friday, I was asked to make my way out to the Bronx to capture Paul McCartney’s landmark performance to a packed Yankee stadium and I eagerly accepted. Having studied traditional newspaper photojournalism in college, shooting concerts is nothing new to me. And while I have shot many large concerts and festivals in the past, I have never shot in anything as insanely enormous and intimidating as Yankee Stadium.

The key to successful images at any concert, big or small, is preparation. Things can go wrong that you may never expect. In fact, it’s not out of the question that you show up to the venue with all your gear only to find out that there was a problem with your press pass and you don’t even make it inside. Luckily, that wasn’t the case on Friday. Before leaving for the show, Sound + Vision editor-in-chief Mike Mettler took some time to brief me on the layout of the concert. Paul McCarntey would be playing on a stage set up in center field, with about 50 rows of floor seats directly in front of him. The photo pit was set up right around second base behind all of the expensive seats. Having shot plenty of baseball games in the past, I knew second base to centerfield was going to be a pretty long distance, so I packed the new Sigma 120-300mm f/2.8 EX DG IF HSM APO, a monopod and a Nikon D3s body with more than enough memory cards for the three songs I would be allocated to shoot (more on that later). Also, for good measure, I packed my trusty Nikon D300, an older Nikon 35-70mm f/2.8 lens, and a Nikon 24mm f/2.8 D lens (just in case were allowed to shoot from closer).

Upon arrival in the Bronx, I made my way to the press gate, tossed my two bags of gear into an airport-security-looking X-ray machine and made my way to the press desk. After some nervous waiting around for the photographers list to arrive, I was cleared to shoot and given a cotton stick-on photo badge. I took this time to look at what the other photographers were doing, which is always a good idea, especially if you are at a venue that is new to you. I noticed that the AP, Getty, New York Times and Reuters photographers were all getting their gear set up as we waited to be escorted out to the field — I had planned on setting up my gear upon arriving down where we would be shooting, but instead followed suit.

We were suppose to be escorted out to the field at 7:30pm, and Paul was set to come on around 8:00pm. As my watched ticked past 7:58pm and we were still standing around in the press room, I began to get nervous. “What if someone screwed up and we miss our chance?” However, it is that sort of nervous mentality that will often lead to unnecessary stress, and a bad shooting experience. And with large events such as this, delays are definitely not uncommon. The important thing is to remain calm, and go with the flow. Eventually we were marched onto the field.

I have photographed in NFL stadiums before, so being surrounded on all sides by an enormous crowd was nothing new, however, the fact that I was about to photograph one of MY favorite musicians ever, living or dead, did give me the feeling of butterflies. After following a Yankees’ PR official through the bowels of Yankee Stadium for a good 15 minutes, we finally arrived out on the field, next to the away dugout, and made our way over to the risers were we would be shooting. Because our position was elevated about a foot off the ground, it actually provided a nice view over the heads of the crowd.

I had the D3s mounted with the Sigma on a monopod, and the D300 mounted with the 35-70 around my shoulder. Generally speaking, I like to shoot concerts on continuous focus, and this show was no exception. I also generally shoot a couple of frames on Aperture Priority mode, set to what I think is going to be the appropriate ISO and my preferred f/stop, generally fairly open for a concert (f/2.8-5.6), before the show begins. I will then inspect the exposure and histogram, and switch back into manual mode. However, as we stood on the risers for a good 20 minutes awaiting Paul’s arrival on stage, the sun began to set and I had to adjust my exposure a couple of stops to compensate. But, no matter how many switches you make before the show starts, it’s important to realize that concert lighting is extremely dynamic, so be ready to switch in a hurry.

Another good piece of advice I find helpful when shooting a concert is to look at your camera’s settings and the histograms often when shooting the first song (assuming you only get three) and use that time to make the necessary adjustments for the other two songs — because, generally speaking, most bands or artists are still warming up a bit on the opener, and what follows is often a better photo-op anyway. I did just this and within the first two minutes of a very long rendition of Hello Goodbye, both my cameras were right on the money. Another point of interest that not all photographers will agree with me on is I ALWAYS shoot concerts on Auto White Balance, for two reasons. The first being that concert lighting is way way too wacky to try and nail the perfect White Balance for, and the second being that I am always shooting RAW and as a result, can adjust my White Balance after the fact.

Assuming you only have three songs, it is important to remember to work quickly. Now, this doesn’t mean simply “spray and pray”. Pay attention to the patterns in the lighting, how the artist acts at the beginning and ends of their songs, the facial expressions they make, and possibly most overlooked, pay attention to reactions from the crowd. After all, concerts are not just about the performer, but rather the energy and connection between the performer and the crowd.

By the end of the second song, I had shot somewhere around 350 images between the two cameras, and it is a good thing I did, because as the third song began, three very large men with mustaches and security shirts stepped in front of us and told us that we were done. A couple of the photographers began to argue with the security officials, saying that we were suppose to be allocated three songs, not two, to which the security guards replied “This is not an argument you are going to win.” They were right. In fact, the photographer next to me continued to shoot as the argument was going on, and quite quickly had his monopod-mounted camera with a 500mm lens yanked from his face.

As a general rule, arguing with bouncers is seldom a wise decison. What they say goes, no questions asked. And while some venues are notorious for nasty, grouchy bouncers, it is important to remember that making friends with them is always a good idea.

Annoyed that we were shorted one song, the photography crew slowly marched off the field and up through the stands at a pace that, at the very least, allowed us to listen to three more songs on our way out.

After I made it back to the press room, I quietly packed up my gear, thanked the PR agents who dealt with us during the night and made my way out the D train, still in disbelief that for a mere 10 minutes, I had seen Sir Paul McCartney do his thing.

Dan Bracaglia Is the Assistant Web Editor for Popular Photography, you can see more of his work on PopPhoto.com and on his personal site.