A veteran photo journalist talks about his now-iconic image. 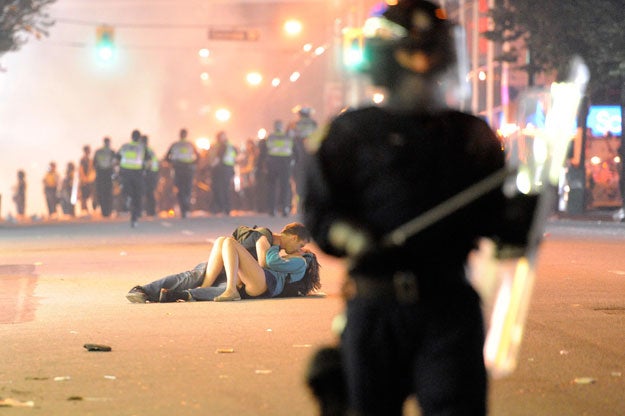 When the Vancouver Canucks lost in game 7 of the Stanley Cup Finals, it sent their home city into tumult. Riots broke out, leaving buildings destroyed, cars burned and people injured. But, out of the chaos, photojournalist Rich Lam was able to capture a truly unique image, one that has blown up far beyond what this veteran shooter could have imagined, on the web and in the news.

What was your actual assignment the night of the riots?

I was shooting the hockey game for Getty Images. My background is a wire photographer working with the Canadian Press. I started working with Getty last season. I shot the game and then I shot the post-game press conference. As I was packing up my gear, they had the TV in the press room working and I saw that it wasn’t slowing down in terms of the riot. I found out a colleague of mine — part of the Getty crew — Bruce Bennett was out on the street already and I just turned to another Getty photographer, Elsa, and said maybe we should go and help out.

How intense was the atmosphere once you got out into the streets?

The situation was pretty tense. We were outside one of the major department stores. There were two cars burning and people were still trying to break windows to get into the store. It looked like clowns in a Mini as people kept jumping out of the store window with hands full of merchandise that they’ve looted. I knew that it was getting to a breaking point and the police were going to come in and clear the whole crowd out. The cars were still burning and people kept throwing stuff into the fire.

How did you first spot the couple in the street?

When the police finally started moving us, they were really trying to get us right out of the area. The mounted squad came in a line and started pushing the crowd toward the intersection. Then the riot police on foot took over. They charged at the crowd to push everyone back. They do that in waves. It’s like a 20 meter run. It’s a good sprint for me. They come at you pretty hard when they want to clear you out.

We stopped when they stopped and I looked back and saw two people on the street. My first instinct was that she was run over by the riot squad and that she was hurt. It made a nice frame because of the juxtaposition. You know, there’s this huge crowd on the street and in a flash of 20 seconds, it’s bare. That’s what they do. If you can’t run, you get knocked down and then they come back and clean things up. And here are two people in the middle of the street waiting to get cleaned up. I framed it with one of the officers to really emphasize the juxtaposition.

Some people online are claiming that the couple isn’t actually kissing at all. What did you actually see?

I’ve been reading online stories, too. She got run over. She was hurt and he was comforting her. And at that moment, a kiss was part of it.

Did the scene immediately stand out to you as something significant from a photographic standpoint?

You know, I saw that someone was hurt and that can sometimes be part of the story. It’s just a frame. Beside me there’s guys running. One guy tried to crash through the police line. Bottles were coming over the top. A mannequin arm went flying over my head. Tear gas was getting thrown. There was a lot going on. Half-mintue to a minute later, they made another charge and pushed us right to the street corner. That was it.

How many frames did you grab of that scene? What made that one the keeper?

I tossed out six frames, so there’s a total of twelve frames of the whole incident. And I didn’t even pick it. We had on-site editors from the hockey game.

A different frame of the couple. Photo: Rich Lam/Getty Images

How did the rest of that night play out for you? Did you know right away you had something special?

I went back to the rink where the editors were, gave them my memory cards and went back to packing up my gear for the night. It wasn’t until another photographer came up to me and said, “Nice frame with the couple kissing on the street.” I didn’t know what she was talking about. I never shot a kissing couple. I shot someone who was hurt on the street. I went back to the room and checked it out and my jaw dropped when I saw that they were kissing.

Can you give us the nuts and bolts technical data for the image?

Do you use a flash in this kind of situation?

I thought of that and shooting a Speedlite in a situation like that is like making yourself a target. I’m trying to go undetected. Just leave me alone and let me do my thing. The last thing I need is a strobe going off so everyone can figure out where it’s coming from. I had a colleague who was shooting in town and had the Speedlite ripped right off the top of his camera by one of the protesters.

Have you covered situations like this in the past?

The last riot I covered was way back in ’98 at battle in Seattle. It’s been a while since I was in the whole tear gas and flash bangs situation.

**What are some important things to keep in mind when shooting in such an intense setting? **

Keep looking, keep shooting, and keep moving. If you stand still, that’s when you’re in trouble. Earlier in the night, we heard from a policeman that the crowd had been turning on photographers and whatnot so that was always in the back of my mind. And as much as I would’ve liked to see what I had gotten, the last thing I was going to do was stand in the middle of the crowd and start chimping [viewing images in the camera using the LCD screen]. It’s like the good old film days. You don’t know what you’re going to get until you get souped.

**Did you feel at all threatened by the people you were out there photographing since they were obviously doing something illegal? **

As you’re shooting the looters, they’re thinking, “Hey that could be seen on the front page.” That could turn ugly. But, there are so many cameras out there. Some of them had me out-geared. I don’t know who they’re shooting for and neither does anyone else. I remember in ’94 when the police were coming up with warrants for the newspapers and confiscating their take. They don’t need to do that anymore. You set the PVR, check Facebook, Twitter, and Flickr.

It has also helped to identify the kissing couple in the photograph. Have you been in touch with them?

I just read online that their identities have been revealed overnight. From my understanding, the guy involved is from Australia. That was his girlfriend. But I’m getting that info online just like everyone else.