How To: Balance Indoor and Outdoor Lighting

Matching light levels can be difficult, but the results are sure to wow 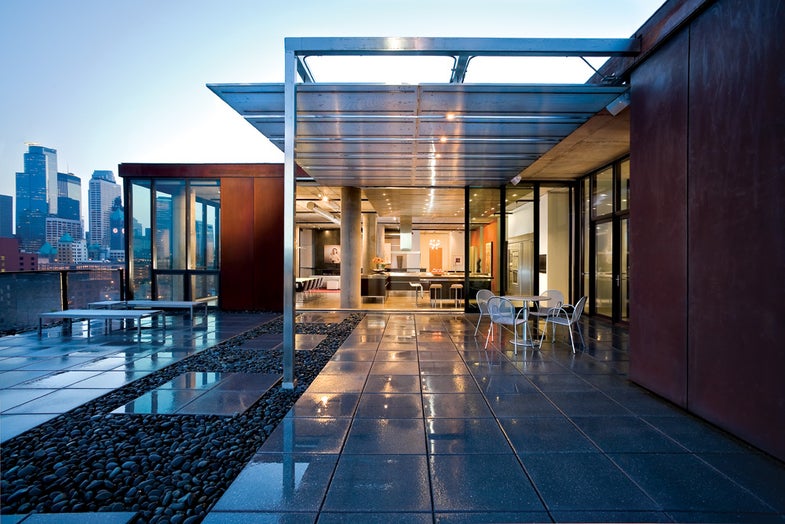 This will test your strobist skills: Try balancing the illumination across a scene where both interior and exterior spaces need even, natural-seeming, and color-correct light. Minneapolis architecture specialist Andrea Rugg did it for this glamorous penthouse apartment. The lighting strategies she used, while common among architectural photographers, form an insightful tutorial for the rest of us.

Matching Light Levels
Rugg had essentially three subjects and each had to be perfectly exposed: the city in the distance with its vibrantly lit windows, the dusky sky above with its deepening blue tones, and the apartment’s interior with its invitingly warm glow. Instead of balancing these three subjects with composited HDR exposures, Rugg decided to wait until the exterior lighting was optimal and then set the output of her eight (hidden) strobes to match its intensity.

“Timing was crucial,” she says. “There was about a 15-minute window that occurred just after sunset when the sky, city, and interior lights all looked good at the same time.” Because this magical moment would be short-lived, she had to be ready for it and work quickly. “I could never have done this alone,” she says.

“We photographed in June of 2010. It was three days after the summer solstice and was one of the longest days of the year,” says Rugg. She needed much of that long day to style the apartment’s furnishings and set up her lights. The temperature of the light was as important as its placement and intensity.

Want to try this yourself? The photographer offers this warning: “Shooting at dusk is difficult because the ambient light is constantly changing. Be prepared to have to almost continuously adjust your lighting so it’s in sync with Mother Nature’s.” Another tip: It will be much easier to balance the overall light intensity if the existing room lights are on dimmers.

Photographer Andrea Rugg evenly lit this apartment while balancing her lighting with that of the city and sky beyond. Her real accomplishment: making it appear that no sources were added to the scene. To do it, she placed eight Dynalite RBTR-2040 strobe heads, most on low Calumet Backlight stands, around the interior, each hidden from view. (The 2040 head has since been replaced by the MH2050 model shown below.) She used these to illuminate the apartment’s entrance (A), the artwork in the living room (B), the back of the couch (C), the dining room table (D, E), the kitchen (F, G), and interior space at right (H). From the camera position (I), the strobes were fired with infrared and radio remote triggers. Rugg wet down the patio flooring (J), which, with the roofing (K), reflected the lights, adding brilliance and depth to the scene.

Lighting How To
Photography Tips
How to
lighting
Shooting